As countless people remain behind bars, we reflect on the most uplifting moments of the year. 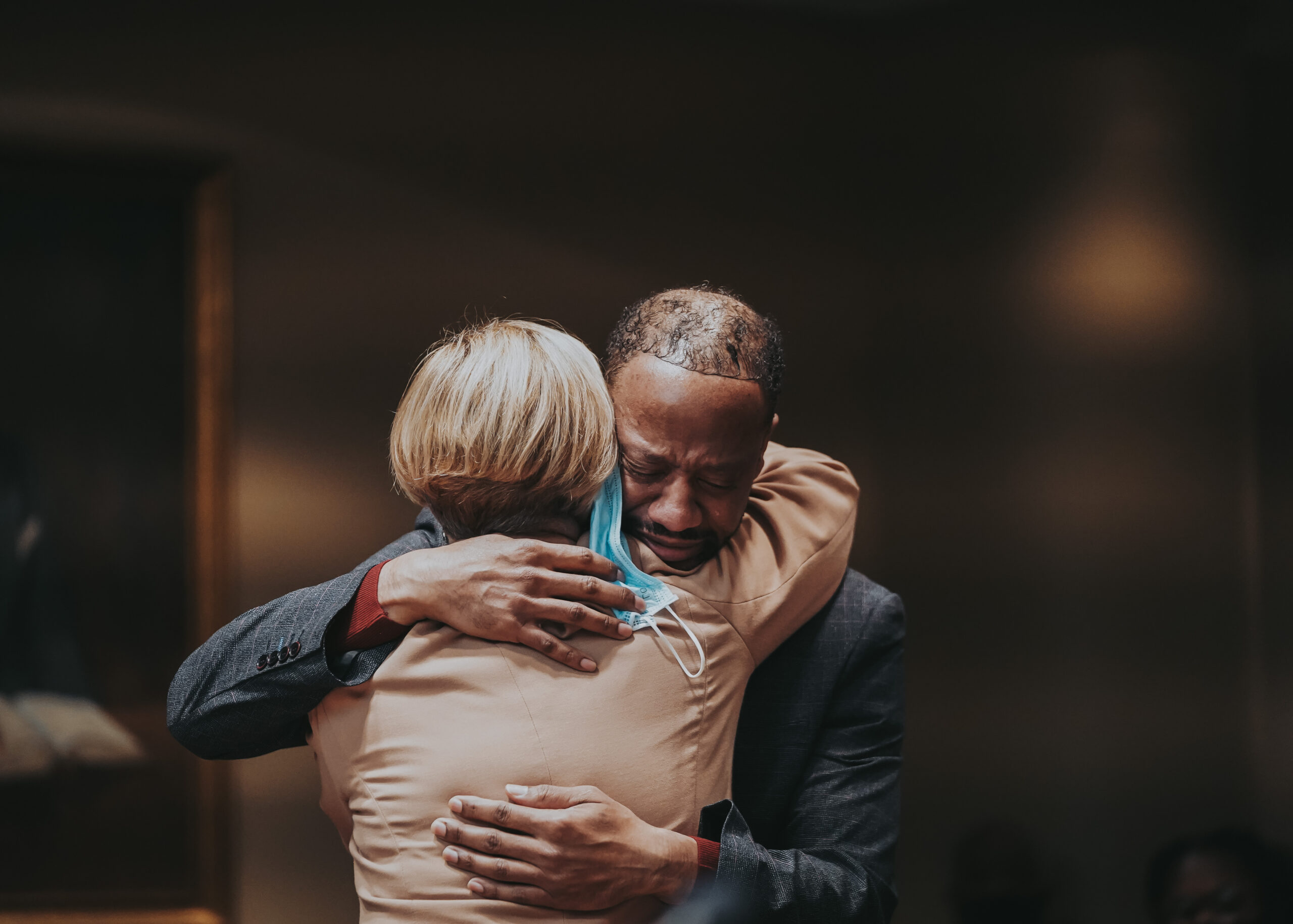 The criminal justice system can easily send an innocent person to prison, yet it can take decades and a village of supporters to free even one person. In fact, it takes 14 years on average. Though we fight an uphill battle every day, it’s these wins — each one representing a person’s life and freedom restored — these glimmers of justice, and touching moments that make it all worth it.

From the energy of passionate advocates across the country to the support of NFL players to celebratory exoneration lunches, these are some of the Innocence Project’s best moments in 2022.

Donate to free the innocent 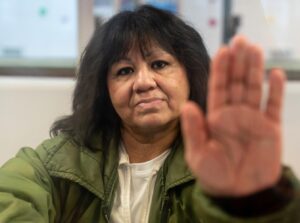 Melissa Lucio poses for a portrait behind glass at the Mountain View Unit in Gatesville, Texas. (Image: Ilana Panich-Linsman for the Innocence Project

In January, the Innocence Project joined the legal team of Melissa Lucio, a woman in Texas who faced execution on April 27 for a crime that never occurred — Ms. Lucio would have been one of the first Latina women executed in U.S. history.

Ms. Lucio was wrongly convicted of killing her 2-year-old daughter, who died from complications after an accidental fall down stairs. Thousands of Texas residents, dozens of lawmakers, and many organizations spoke out on Ms. Lucio’s behalf and on April 25, the Texas Court of Criminal Appeals issued a stay two days before her scheduled execution and ordered the court to consider new evidence of her innocence.

Over the past two years, hundreds of thousands joined our campaign in support of Pervis Payne, who maintained his innocence on death row in Tennessee for 33 years. In November 2021, the Shelby County district attorney agreed to remove Mr. Payne from death row based on intellectual disability. Then, this January, a Tennessee judge made him eligible for parole within six years following a hearing where 19 witnesses testified that Mr. Payne was not a threat to society.

Michael Monroe, a navy veteran, spent 28 years in prison for a crime he didn’t commit. Mr. Monroe was released and reunited with his family early this year as he is battling cancer. To celebrate his return home and make up for nearly three decades of missed holidays, his family recreated Christmas for him in January.

♬ Will to Live – Jacob Yoffee

Robert DuBoise enjoyed football growing up, but since being freed and exonerated in 2020, he has developed a new relationship with the sport and his hometown team, the Tampa Bay Buccaneers.

In January, the team gifted Mr. DuBoise a pair of unique cleats inspired by his 37 years of wrongful imprisonment during an “Inspire Change” game against the Carolina Panthers. The cleats, designed as part of the NFL’s “My Cause, My Cleats” campaign, bear Mr. DuBoise’s name and the number of years he spent wrongfully incarcerated. They were presented to Mr. DuBoise by Buccaneers offensive tackle Donovan Smith, who wore them at a practice ahead of the game.

Barry Jacobson was convicted of arson in 1983 after a deck on his family’s vacation home was set on fire in Richmond, Massachusetts. Mr. Jacobson was sentenced to six months in prison and a $10,000 fine. He spent more than a month in prison for a crime he didn’t commit, based on unreliable arson evidence and a baseless claim that he was looking to collect insurance money on his home despite the fact that he never filed a claim.

Following the jury verdict, evidence of antisemitic bias on the jury began to surface. In April, a Massachusetts district attorney agreed that Mr. Jacobson had been wrongly convicted in a trial during which jurors made antisemitic remarks about Mr. Jacobson, who is Jewish.

6. Mallory Nicholson is exonerated after 40 years

In June, a Texas judge dismissed Mallory Nicholson’s 1982 burglary and sexual assault charges based on newly discovered evidence of his innocence that the State had withheld at his original trial. Mr. Nicholson had been tried before an all-white jury, who rejected his five alibi witnesses, all of whom were Black.

He spent 21 years in prison for crimes he did not commit. After being released on parole in 2003 he was forced to register as a sex offender. The Dallas County District Attorney’s Office Conviction Integrity Unit, who jointly re-investigated the case, dismissed the charges on innocence grounds. Mr. Nicholson celebrated his freedom and the clearing of his name with his legal team and his wife, a childhood friend he reunited with after his release.

John Galvan, Arthur Almendarez, and Francisco Nanez, who spent a combined 105 years incarcerated in Illinois for a crime they were coerced into falsely confessing were exonerated in July.

All three were young men when they were intimidated with threats and violence and ultimately coerced into falsely confessing. Their case is part of the long and documented history of such tactics by the Chicago Police Department particularly against young men of color. These false confessions and now invalidated arson science served as the primary evidence used to convict Mr. Galvan and his co-defendants.

Nina Morrison, one of the Innocence Project’s longest-serving attorneys, who helped exonerate 30 innocent people from prison, became a United States District Judge for the Eastern District of New York in September. Judge Morrison brings a much-needed perspective to the bench and her experiences, humility, and relentless commitment to ensuring equal justice for all will make her an exceptionally fair jurist.

9. Herman Williams reunites with his family after 29 years behind bars

An Illinois judge vacated the conviction of Herman Williams and ordered his immediate release after nearly 29 years in prison for a crime he did not commit. A decorated member of the U.S. Navy, Mr. Williams, who is now 58 years old, was wrongfully convicted for the 1993 murder of his ex-wife in Waukegan, Illinois, where he was stationed at the time. The Lake County District Attorney’s office acknowledged the trial prosecutors withheld favorable evidence and presented the jury with scientifically unfounded pathology evidence. New evidence of Mr. Williams’ innocence also included advanced DNA testing.

See his first steps of freedom.

The Innocence Project was named the fifth winner of the Clarence B. Jones Impact Award, an honor from The Communications Network that recognizes and celebrates the impact of transformative communications campaigns in the social sector. The award is named for Dr. Jones, an attorney and Dr. Martin Luther King’s speech writer. The Innocence Project team was recognized for the grassroots campaign that led to a stay of execution for Pervis Payne and his removal from death row.

The Innocence Project celebrated its 30th birthday this year. 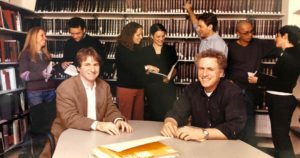 Barry Scheck and Peter Neufeld with their team.

In 1992, Barry Scheck and Peter Neufeld who started their careers as Bronx Public defenders, began a clinic at Cardozo Law School to use DNA testing to prove defendants were innocent of crime. Today, the organization has helped free over 200 innocent people from prison, passed hundreds of laws to prevent wrongful conviction, and developed a network of over 68 Innocence Network partners across the U.S. and around the world. None of which would have been possible without the support of this community.

The Gate of the Exonerated in Central Park was unveiled on Dec. 19 commemorating 20 years since Yusef Salaam, Korey Wise, Raymond Santana, Kevin Richardson, and Antron McCray were exonerated of assaulting a Central Park jogger as teenagers. The monument is Central Park’s first newly named entrance since 1862 (located at 110th between Malcolm X Boulevard and Fifth Avenue). The gate honors all New Yorkers who have been exonerated.