The Dallas Conviction Integrity Unit uncovered exculpatory evidence that had been withheld at trial. 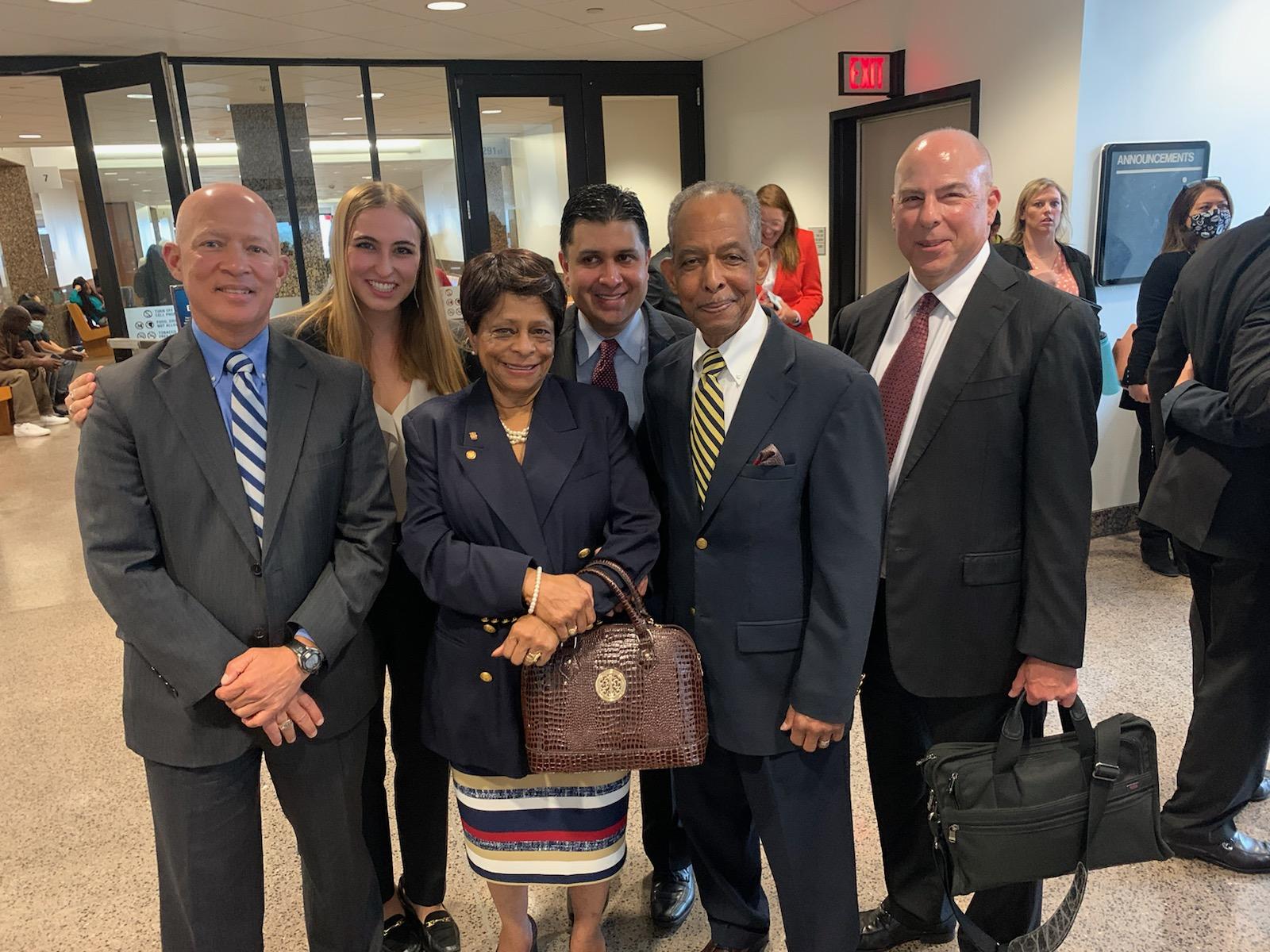 (Dallas, Texas – June 2, 2022) Today, District Court Judge Chika Anyiam granted the Dallas County district attorney’s motion to dismiss Mallory Nicholson’s 1982 burglary and sexual assault charges based on newly discovered evidence of his innocence that the State had withheld at his original trial. Today’s action by the court officially exonerates Mr. Nicholson of this crime after 40 years.

Mr. Nicholson had spent 21 years in prison for crimes he did not commit and had been forced to register as a sex offender since 2003, when he was released on parole. In 2019, at the Innocence Project’s request, Cynthia Garza, chief of the Dallas County District Attorney’s Conviction Integrity Unit (CIU), and Holly Dozier agreed to review Mr. Nicholson’s case. During their reinvestigation, they discovered that the State had withheld key evidence at trial that pointed to an alternative suspect and demonstrated inconsistencies in the victims’ identifications of Mr. Nicholson. Under the United States Supreme Court case Brady v. Maryland, the State must disclose such favorable evidence to the defense and vacate convictions, like Mr. Nicholson’s, that involve Brady violations.

Mr. Nicholson was arrested for burglary and the sexual assault of two children in June 1982. No physical evidence connected him to the crime and he has steadfastly maintained his innocence for decades. At trial, he presented strong alibi evidence to support the fact that he had been with family at his wife’s funeral, which took place 45 minutes outside of Dallas at the time of the crimes.

Based on the discovery of the undisclosed exculpatory evidence, the CIU agreed that Mr. Nicholson was entitled to a new trial. In addition to the Brady violations, the case was also marred by eyewitness misidentification and racial bias.

“Today, the criminal legal system acknowledges what Mr. Nicholson has known and maintained for the last 40 years — he had nothing to do with this crime. Mr. Nicholson has spent the last 40 years enduring the horror of a wrongful conviction. He spent 21 years locked in prison and for the last 20 years, has been forced to register as a sex offender, which led to him being ostracized by his community — all for a crime he did not commit,” said Innocence Project Attorney Adnan Sultan, who represents Mr. Nicholson. “Today, Mr. Nicholson has finally received justice thanks to the Dallas County district attorney, the CIU, and their work uncovering this Brady evidence and recognizing the misconduct of the trial prosecutors in this case.”

Mr. Nicholson is also represented by Gary Udashen of Udashen Anton. “D.A. Creuzot’s actions in this case represent significant progress over the last 40 years in how prosecutions are handled in Dallas,”  said Mr. Udashen. “Today, we would hope that Mallory Nicholson would not be arrested, prosecuted, or convicted — and that any prosecutor handling this case would ensure that evidence showing someone other than Mr. Nicholson committed this offense would be fully disclosed to his attorneys.”

Mr. Nicholson is now officially eligible for compensation for the years he lost to his wrongful conviction.

On June 12, 1982, two boys, 7- and 9-year-old cousins, were approached by a young man who offered them $5 to help him enter an apartment through a window. Once inside, the man stole several items and sexually assaulted both children. The boys told their aunt, who called the police, and the cousins were taken to Parkland Hospital for sexual assault examinations.

Both boys initially told police and the examining doctor that they had been assaulted by a Black 14-year-old. They also provided the attacker’s nickname to police, who later learned that the attacker lived near the crime scene.

Two days after the assault, police drove one of the victims to the crime scene. On the way, the boy saw 35-year-old Mallory Nicholson standing in front of an apartment building with friends and claimed he was the person who had committed the crime.

The following day, police showed the other victim a photo lineup, which included Mr. Nicholson. While the victim did not identify Mr. Nicholson at the time, his mother later called detectives and claimed her son had recognized the person who had committed the crime but had been afraid to point him out. Police put Mr. Nicholson in a live lineup the next day, and both victims identified him. Even though Mr. Nicholson had been at his wife’s funeral on the day of the crime, police arrested him and charged him with burglary and sexual assault. Eyewitness misidentification, as in this case, has contributed to approximately 63% of the 232 wrongful convictions that the Innocence Project has helped overturn.

At trial, the boys claimed for the first time that the attacker had told them he had been in a hurry because he had had to attend his wife’s funeral. The State argued that this was a distinct fact, unique to Mr. Nicholson, which proved guilt.

Throughout the trial, the defense maintained that the boys had misidentified Mr. Nicholson as the person who committed the crime. It also presented numerous alibi witnesses who confirmed Mr. Nicholson had been at his wife’s funeral with friends and family in the hours after the crime occurred. Despite the strength of this evidence, Mr. Nicholson was convicted and sentenced to 55 years for the assaults and eight years for burglary.

In this case, the favorable evidence which the State failed to disclose to Mr. Nicholson’s defense counsel included:

Mr. Nicholson was tried before an all-white jury, who rejected his five alibi witnesses, all of whom were Black. All-white juries have historically convicted Black defendants at a higher rate than white defendants and have been shown to disregard the testimony of truthful Black defense witnesses in favor of weak circumstantial evidence.

Additionally, the prosecutor relied heavily on negative racial stereotypes at trial, focusing on Mr. Nicholson’s recent unemployment and implying that his alibi witnesses were not reliable because they “hung out” and drank every night.

Officers were apparently satisfied by the simplest similarity between Mr. Nicholson and the original description of the attacker — the only commonality was that both were “Black males” — and therefore made no efforts to follow up on the alternative suspect. Such tunnel vision is a known function of implicit racial bias. The resulting wrongful conviction of Mr. Nicholson robbed him of nearly four decades of his life.