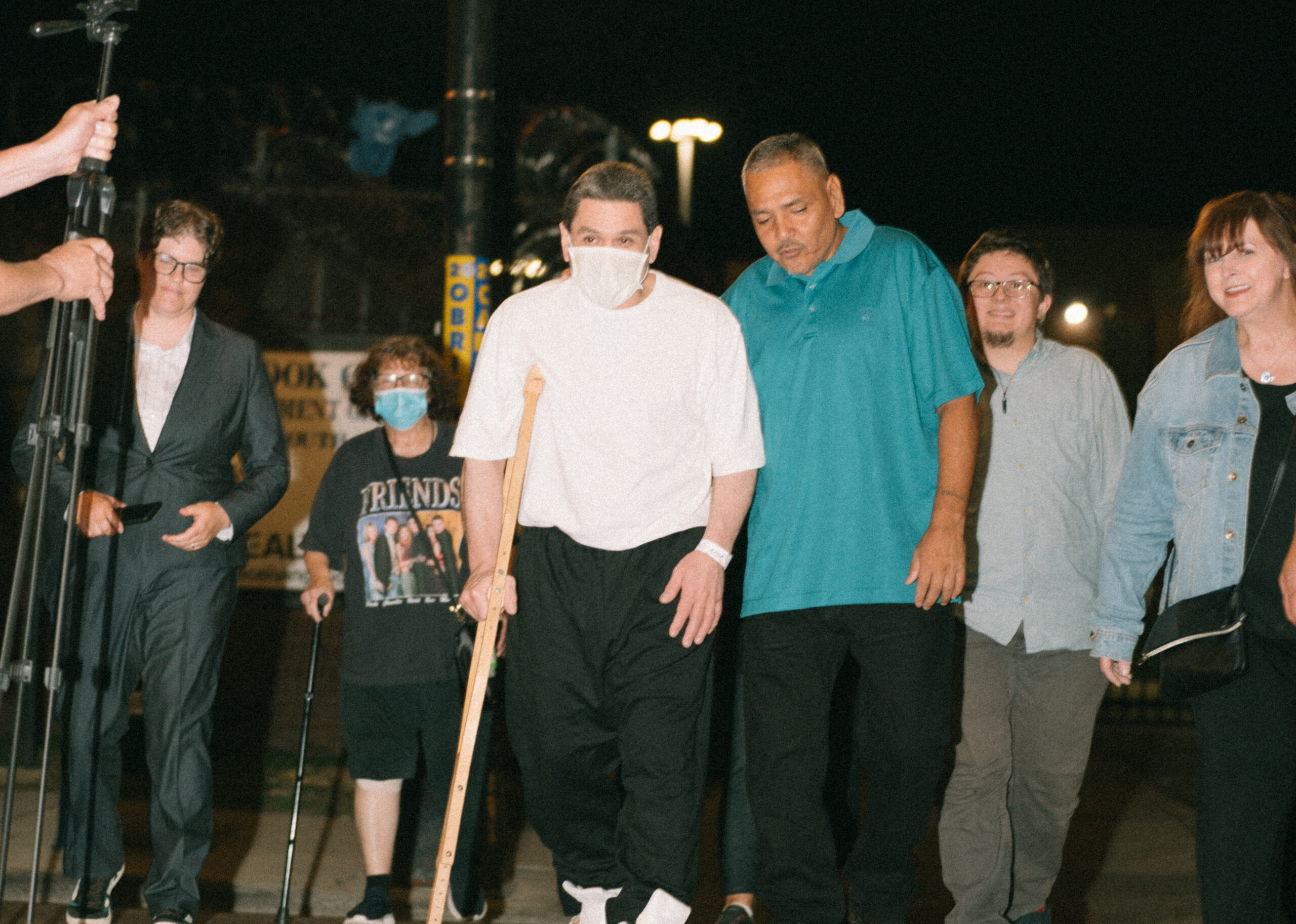 (Chicago, IL — July 21, 2022) The Office of the Cook County State’s Attorney’s Office dismissed the cases of John Galvan, Arthur Almendarez, and Francisco Nanez today, after the convictions of Mr. Galvan and Mr. Almendarez were vacated by the Appellate Court earlier this summer. Mr. Nanez’s conviction was also vacated today. The men were wrongfully convicted for an alleged aggravated arson and alleged murder, for supposedly starting a September 1986 apartment fire on the southwest side of Chicago in which two brothers, Julio Martinez and Guadalupe Martinez, died. Mr. Galvan was just 18, Mr. Almendarez, 20 and Mr. Nanez, 22 when they were arrested and wrongly incarcerated. The men were sentenced to life without the possibility of parole, and could have been sentenced to death. Combined, they have spent 105 years in prison for an alleged crime they didn’t commit.

Their case is part of the long and documented history of the Chicago Police Department  coercing false confessions particularly from BIPOC young men using violence, threats, and intimidation. In addition to now invalidated arson science, the key piece of evidence used to convict Mr. Galvan and his co-defendants was a false confession coerced from him after he was handcuffed to a wall and beaten by police.

Mr. Galvan, Mr. Almendarez and Mr. Nanez’s wrongful conviction was based on three key factors. First, a neighborhood man claimed that he saw Mr. Galvan come out of the alley behind the building that burned around the time the fire began. Second, a Chicago arson investigator said that the fire was an arson based on faulty arson science. Third, and most importantly, Mr. Galvan gave a confession, which he has always maintained was the product of police torture.

The three men were also convicted despite the fact that the only witness who claimed she saw this fire begin, a woman who lived across the street from the building that burned, testified at trial that she saw a group of people in the alley at the time the fire began, but that Mr. Galvan was not in that group. Additionally, Mr. Galvan’s family testified that at the time of this fire he was home asleep.

“At 18, 20, and 22, the lives of these three men were just beginning when their freedom was stolen. They have shown such determination and strength over the last three and a half decades,” said Tara Thompson, Mr. Galvan’s Innocence Project attorney. “This case is representative of the many wrongful convictions stemming from the pervasive misconduct by Chicago law enforcement, as well as invalidated forensic techniques. We have to address these recurring issues if we are to have truly fair and equitable systems of justice in this  country.”

“It has been a true honor to represent these courageous men who have endured unspeakable tragedy. Yet again, the Chicago justice system failed. It failed these men and it failed the families of two people who tragically died 35 years ago. Chicago needs to do better,” said Joshua Tepfer, attorney at The Exoneration Project, who also represents Mr. Galvan and is Mr. Almendarez’s attorney.

Police immediately began interviewing the surviving victims and surrounding neighbors. Blanca Martinez, the sister of the victims, and several neighbors told police that a woman from the neighborhood had threatened to burn down the building in apparent retaliation for the death of her brother. The woman was questioned by police and denied involvement but said that Mr. Galvan was involved.

In their investigation, police also interviewed two men from the neighborhood, Jose Ramirez and Rene Rodriguez, who told police that Mr. Galvan, his brother, and Mr. Almendarez’s brother were involved in the deadly fire. Police then arrested all three men along with Mr. Almendarez.

In multiple interactions with the police, Mr. Galvan, Mr. Almendarez, and Mr. Nanez gave coerced confessions to the police, and were charged with aggravated arson and murder the next day. Mr. Galvan’s statement says that the occupants of the home were in the Villalobos Street gang – a supposed rival gang – and he killed them because he had been jumped by members of the gang earlier and wanted to get back at them. In this account, he, Mr. Almendarez, and Mr. Nanez started this fire by throwing a beer-bottle’s worth of gasoline into the porch area of the home and lighting it with a cigarette.

At trial, Mr. Galvan professed his innocence. The night of the fire he went to his grandmother’s at about 3:00 a.m. and went to sleep. While driving around earlier that night he saw  two men who were drinking and threw bottles at him, and would later point the finger at him in the police investigation – Jose Ramirez and Rene Rodriguez.

Also at the trial, Detective Mark Scheithauer from the CPD Bomb and Arson Section testified as an expert witness, insisting that the origin of the fire was the porch in front of the doorway going into the first-floor apartment, based on “significant burning and deep charring” on the first-floor porch, as well as areas of burn-through in front of the back doorway. He testified with specificity that this burn-through indicated “something was laying on the surface of the floor that involved the wood to a greater degree than the surrounding areas causing it to burn down and through the floor.” He identified the cause as “propagated by means of a liquid accelerant” with an unknown ignition source. This evaluation would later be proved scientifically impossible.

Mr. Galvan, Mr. Almendarez and Mr. Nanez were convicted on all counts and sentenced to life.

Mr. Galvan, Mr. Almendarez, and Mr. Nanez fought for years through the Illinois post-conviction process to get an evidentiary hearing on new evidence they found supporting a number of post-conviction claims, including actual innocence, ineffective assistance of counsel, Brady violations, a violation of  Fifth Amendment rights not to have an involuntary confession used against them, and a Batson violation. In Mr. Galvan’s case, the Court of Appeals ordered that he receive an evidentiary hearing and in 2015 and 2016, Mr. Galvan presented numerous days of testimony and evidence he started amassing in 2001. That evidence included:

Dr. Russell Ogle, who has investigated hundreds of residential fires, and was qualified as fire and explosions expert explained that Mr. Galvan’s purported confession was inconsistent with the true ignition source of this fire. The confession presented a scenario that was scientifically impossible for multiple reasons, including (1) it is now undisputed in modern science that a burning cigarette cannot ignite a flammable vapor, and (2) a Molotov cocktail could not have been involved in the ignition of the fire, because a burning cigarette cannot ignite wood that has been soaked in gasoline, and the volume of gasoline in a beer bottle was too small to burn down a building.

Evidence Pointed to a Neighborhood Woman as an Alternate Suspect

Detective Thomas Jones of the Chicago Police Department testified that there were multiple witnesses who told him that a neighborhood woman had made threats to burn down the building in retaliation for the death of her brother. This evidence is reflected in police reports documenting interviews with neighbors and associates of the woman.

A witness who was on the street the night of the fire told the CPD detectives he knew Mr. Galvan and Mr. Almendarez, and that he did not see them there the night of the fire. During that interview, police asked him if anyone else was around that night, and the witness told them that there were a couple of young guys in the alley whom he did not recognize.

Additional Evidence Emerges that the Confessions Were Coerced

Mr. Galvan’s brother confirmed Galvan’s account police torture, testifying that he could hear yelling, crying, and noises on the wall or table during Mr. Galvan’s interrogation. Mr. Galvan’s mother also said that when she saw him after his police interrogation, he looked shaky and pale, telling her that “he couldn’t take it anymore” and that his confession was the result of physical abuse. Additionally, seven witnesses testified that they had also been victims of torture at the hands of the detectives who coerced confessions from Mr. Galvan and Mr. Almendarez. These witnesses described in detail what happened to them during their interrogations and how they came to falsely confess.

In 2019, the Appellate Court granted Mr. Galvan post-conviction relief on the grounds of actual innocence.  The appellate court focused on the pattern of torture evidence presented at the hearing, and concluded that without Mr. Galvan’s confession, “the State’s case was nonexistent.” The Court also found that there was additional “strong evidence of actual innocence, especially in light of the fact that the only evidence against petitioner [was] his own statements. No physical evidence or eyewitness testimony tied the petitioner to this crime, and he contends that his statements were not voluntary.”

The Brady rule requires prosecutors to disclose materially exculpatory evidence in the government’s possession to the defense.

The Batson challenge refers to the act of objecting to the validity of a peremptory challenge, on grounds that the other party used it to exclude a potential juror based on race, ethnicity, or sex.