John Oliver: “Maddened” That It’s Legal for Police to Lie to Suspects During Interrogations

In nearly every state, it’s legal for police to use deceptive tactics during interrogation. 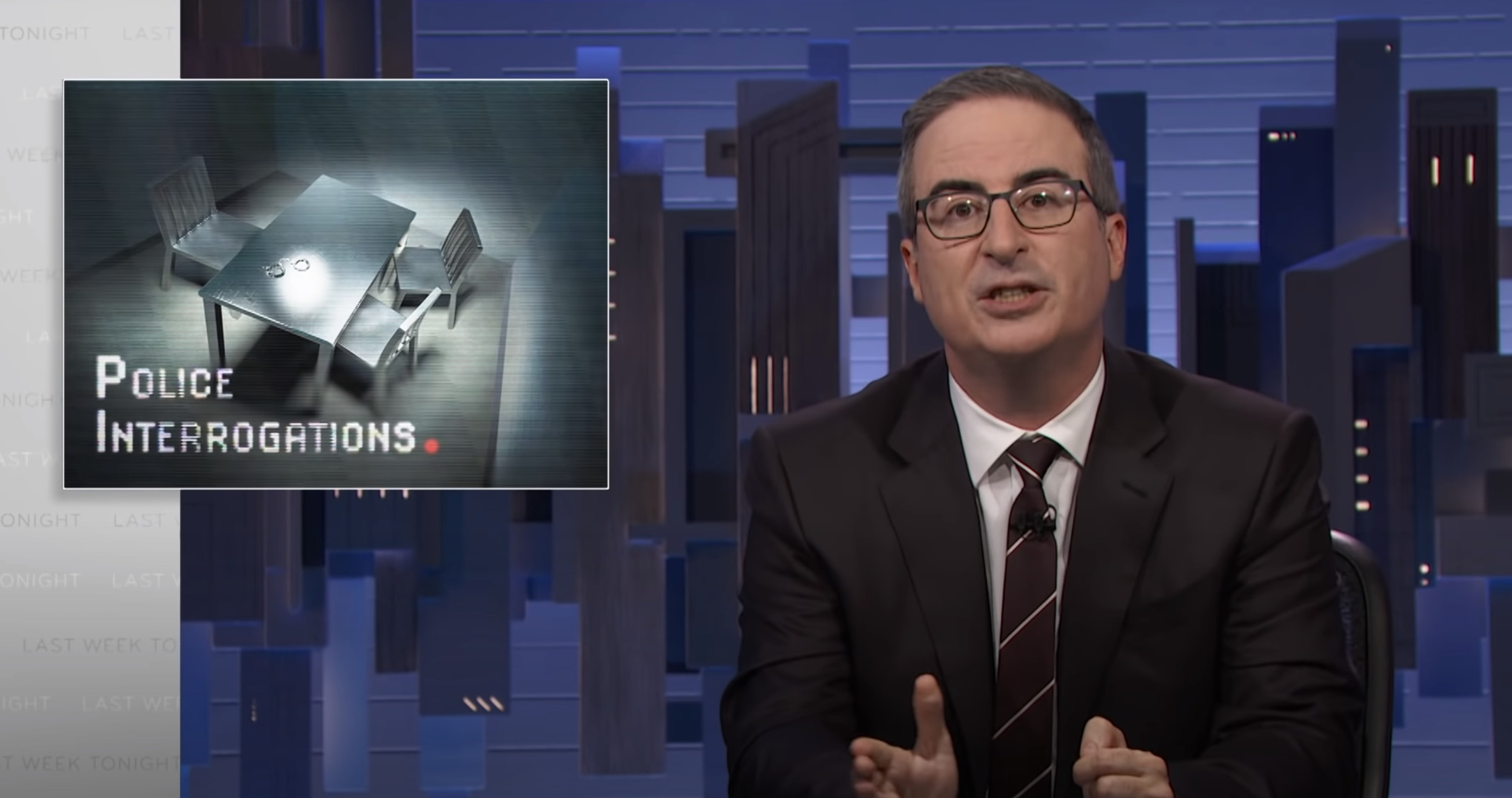 Yesterday on HBO’s “Last Week Tonight”, host John Oliver took aim at the false confession phenomenon, highlighting various risk factors, from coercive interrogation methods to lack of judicial oversight. Since 1989, over 3,000 innocent people have been exonerated in the U.S,  and at least 10% falsely confessed to crimes they did not commit, including Innocence Project client Christopher Tapp, who was featured on the show.

“Allowing the police to lie to suspects is crazy, most countries do not allow it and for good reason, it is far too powerful a tool,” said Mr. Oliver. In nearly every state, it’s legal for police to use deceptive tactics during interrogation.

In fact, Oregon, Illinois, and Utah just became the first states in the country to ban police deception during the interrogation of juvenile suspects, who are especially vulnerable to false confessing.

“The overwhelming pressure of a police interrogation coupled with their ability to invent evidence can actually make people question their own memories — that happened with Christopher Tapp who served 20 years in prison for a murder he did not commit and was heavily manipulated during his interrogation,” said Mr. Oliver about Mr. Tapp who was just 20-years old at the time of the interrogation.


The Innocence Project, in coalition with exonerated people, community organizers, and lawmakers, are working on a series of reforms, described below, to prevent false confessions that lead to wrongful convictions, but countless people are still fighting for their freedom after falsely confessing to crimes they did not commit.

“There are still many incarcerated people fighting convictions that have every hallmark of a false confession like Brendan Dassey …. and Melissa Lucio whose incredible manipulated interrogation we featured in our wrongful convictions piece and is set to be executed in just 10 days,” Mr. Oliver said.

In 2008, Innocence Project client Melissa Lucio was sentenced to death and now faces execution on April 27 in Texas largely based on statements she was coerced into making in a marathon interrogation the night her 2-year old daughter, Mariah, died following a tragic fall. Police jumped to judgment – erroneously concluding that Mariah’s death was a murder and just two hours after her daughter’s death, Ms. Lucio was brought in for questioning. Officers aggressively interrogated Ms. Lucio, who was pregnant and in shock from the loss of her child, for over five hours. After asserting her innocence more than 100 times, Ms. Lucio finally acquiesced and told interrogators, “I guess I did it” and, reluctantly, agreed to take responsibility for various injuries on Mariah.

Similar police tactics led to the wrongful convictions of Texan Chris Ochoa, who was threatened with the death penalty and then falsely confessed to a murder he did not commit, the infamous Exonerated Five (Central Park jogger case), and untold others. In homicide exonerations proven through DNA testing, a false confession is the most common contributing factor.

While there are some particularly vulnerable groups to false confession, including young people and people with cognitive deficits or mental illnesses, it is important to understand that perfectly mentally capable adults provide false confessions with great frequency. Even more troubling is the fact that judges and juries uncritically believe confessions when confronted with them, since, historically, it was nearly impossible to discern a true confession from a false one.

A person might falsely confess due to stress, exhaustion, confusion, feelings of hopelessness and inevitability, fear of a harsher punishment for a failure to confess, substance use, mental limitations, or a history trauma due to sexual abuse or domestic violence. And sometimes it is psychologically coercive methods employed by law enforcement or the feeding of facts, even unintentionally, from an interrogator to a suspect that compels the innocent to confess.

The Innocence Project’s policy agenda to reduce the incidence of false confessions includes a range of reforms, three of which were spotlighted on “Last Week Tonight”:

Currently, 30 states and the District of Columbia mandate the recording of interrogations, either by statute or court action. Federal law enforcement agencies record interrogations through Department of Justice policy. The Innocence Project will continue to advocate for laws in the remaining 20 states, including one currently pending before the New Hampshire legislature.

The recording of custodial interrogations, however, represented only the first generation of false confession reforms. Policymakers are now also focusing their attention on regulating interrogation methods employed in the interview room and the courthouse.

Most police agencies in the United States, in stark contrast to their European counterparts, are allowed by courts to employ psychologically coercive yet legally permissible interrogation techniques including knowingly lying to suspects in order to get a confession. Suspects can be told untrue statements about the presence of incriminating forensic evidence –– untested or even nonexistent –– linking them to the crime. They might also be falsely told that their co-defendant or the victim of the crime has implicated them. They can be promised leniency in exchange for a confession. These are all forms of deception, which have been used in the interrogation room and shown to compel confessions from the innocent. Frighteningly, these techniques are based on the presumption of guilt – not innocence.

There are other reforms directed at regulating techniques and methods employed in the interrogation room. For instance, policymakers should limit the length of interrogations, as research shows the reliability of statements after two hours of sustained interrogation decreases. Policymakers should also implement trauma-informed interviewing methods, which not only protect victims of emotional, physical and sexual violence, but also improve the reliability of statements made by suspects of crime.

3. Value of Pre-trial Reliability Hearings/Assessment of Reliability of Confession Evidence

Confessions are simply assessed by the courts for “voluntariness,” and we now know from the nation’s 365 exonerations involving a false confession that these confessions were, indeed,  involuntary. These are 365 examples of ironclad proof that a voluntariness assessment is an insufficient test for the admissibility of confession evidence.  Indeed, observance of Miranda, e.g. the right to remain silent, has become a shorthand for a careful examination of the facts through assessing reliability of the evidence.

It should be unsurprising, then, that confession evidence is uncritically assessed; 81% of proven false confessors who went to trial were convicted.  In other words, the jury system is not positioned to protect people who falsely confess, which is why the Innocence Project also seeks pre-trial reliability hearings as part of its reform agenda.

Pretrial reliability hearings are critical because so many false confessions resulted from police contamination of the confession, as highlighted on last night’s program. Contamination could be factored into a finding that it was an involuntary confession if the suspect parrots back whatever she is told by the police, her will probably overborne. However, very few of the trial courts that presided over exoneration cases considered contamination as a factor in assessing voluntariness — most courts just found the confession to be voluntary and hence admissible.

False confession exoneration cases, including those proven through DNA evidence, demonstrate these 365 confessions were unreliable. If courts do not begin to assess the reliability of confessions before admitting them into evidence, they will routinely admit false and fabricated confessions which will be received by judges and juries as the most persuasive evidence of guilt. Legislative proposals that would mandate the assessment of the reliability of a confession before it can be admitted into evidence are currently pending in California, Connecticut and New York.

In addition to the critical reforms that were explored on “Last Week Tonight”, a range of other reforms, including establishing a right to counsel during interrogations, must also be implemented. A combination of reforms are needed to prevent false confessions and lawmakers must race against time to ensure the implementation of safeguards that can prevent them in the future.

Rebecca Brown is the Innocence Project’s Director of Policy.