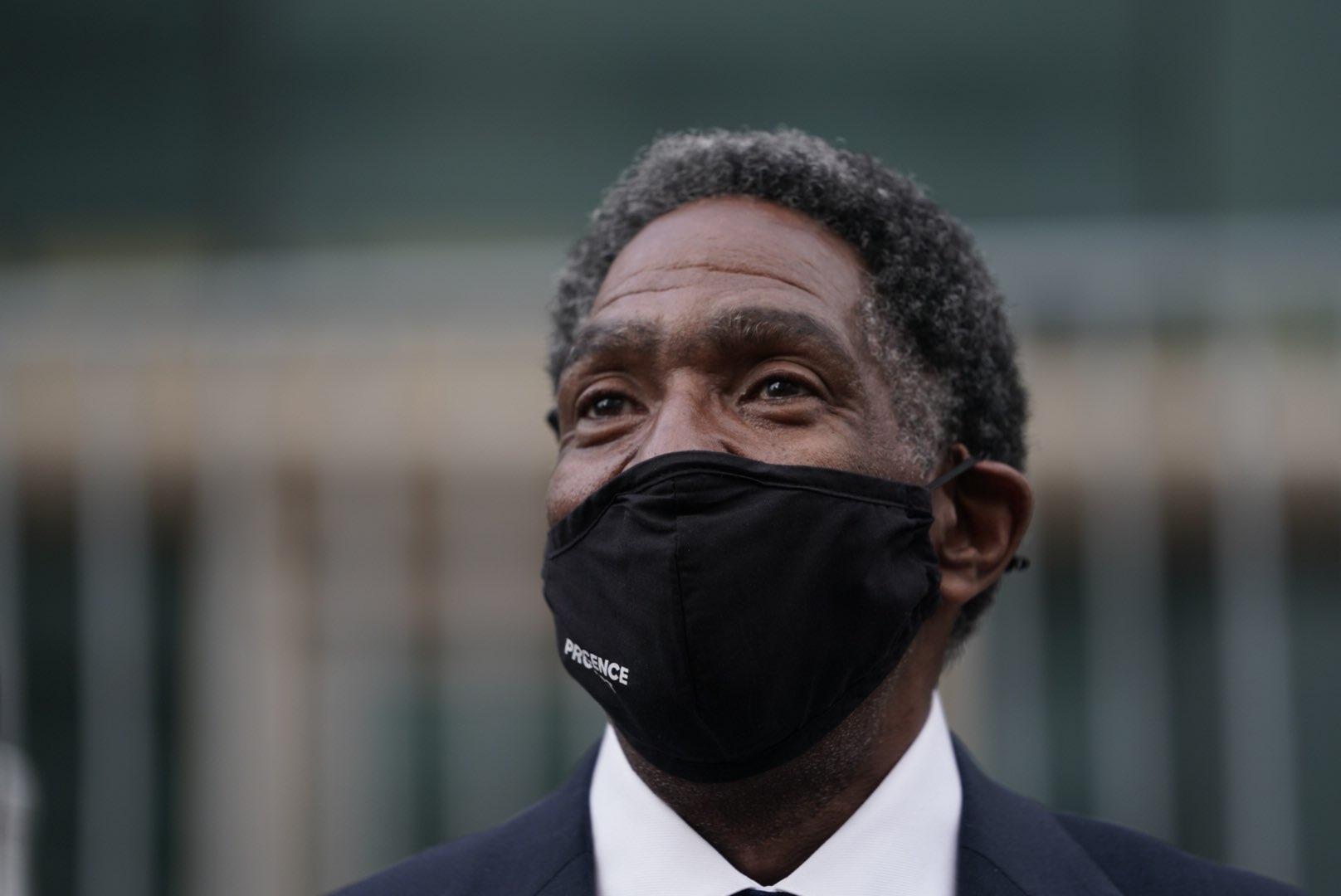 Jaythan Kendrick outside the Queens County Supreme Court after his exoneration on Nov. 19, 2020. (Image: Ben Hider for AP/ Innocence Project)

Mr. Kendrick was arrested for the murder of a 70-year old woman who was stabbed during a robbery while walking through the Ravenswood Houses in Queens in November 1994. At trial, the prosecution’s primary evidence was testimony from two witnesses — a 10-year-old boy who saw the crime from his third-floor apartment over 100 feet away, and a man who initially claimed he had not seen the suspect but later changed his statement to corroborate law enforcement’s theory that Mr. Kendrick was the assailant. No physical evidence linked Mr. Kendrick to the crime.

Mr. Kendrick is represented by Susan Friedman and Vanessa Potkin of the Innocence Project, which is affiliated with the Benjamin N. Cardozo School of Law; Ross Firsenbaum, Charles Bridge and Brett Atanasio of WilmerHale; and Janet Carter. Over the past eight months, the Innocence Project and WilmerHale worked collaboratively with the Queens District Attorney’s Office in the reinvestigation of Mr. Kendrick’s case, resulting in his exoneration today. 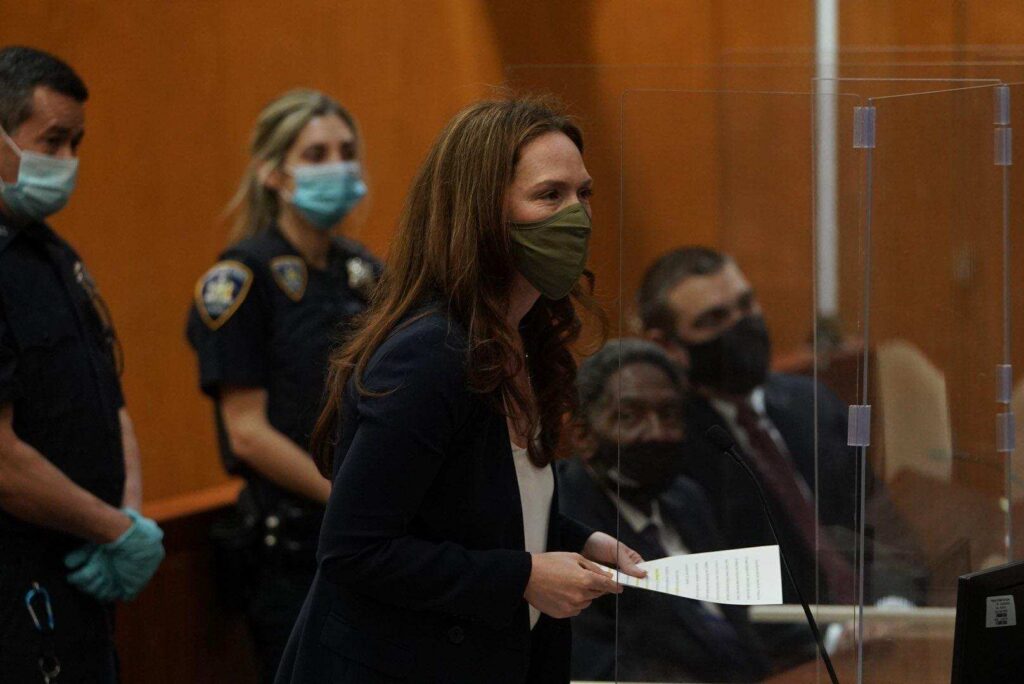 “Mr. Kendrick has endured an unimaginable injustice for over 25 years. He has spent decades trying to right this wrong, but the system failed him at every step,” said Susan Friedman, Mr. Kendrick’s Innocence Project attorney. “This is a textbook case of wrongful conviction exposing the worst flaws in our system – racial profiling, unduly suggestive identification procedures and a lack of police accountability at very least. Thankfully, the new evidence in this case, including DNA, has provided overwhelming proof of Mr. Kendrick’s innocence.”

“I never thought this day would materialize. Tomorrow I am going to wake up and go home,” said Mr. Kendrick. “I saw so many other people get to leave and I was still here. Finally the truth is out that I didn’t commit this crime.” 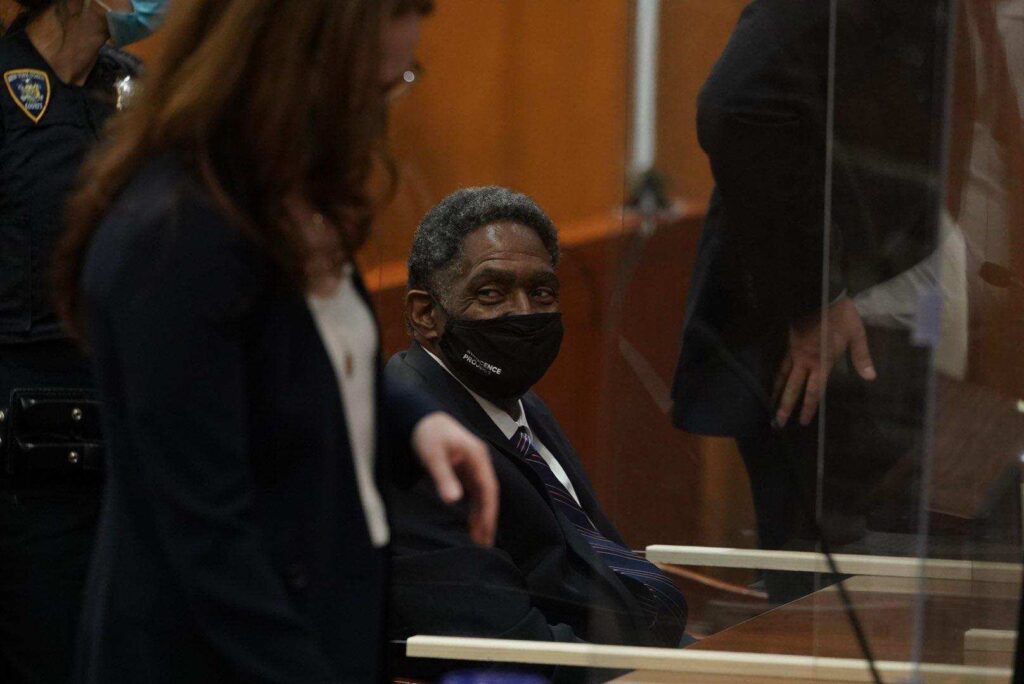 Help Mr. Kendrick transition home by buying an item off of his Amazon Wishlist.

A Presumption of Guilt

On November 30, 1994, at 3:30 p.m., a woman was stabbed and her bag stolen as she was walking through the grounds of the Ravenswood Houses in Long Island City. Brandon Rogers, the 10-year-old witness who saw the attack from his third floor apartment window, told police the assailant was a Black man in his thirties, wearing a white jacket, white shoes and a camouflage hat.

“Finally the truth is out that I didn’t commit this crime.”

Hours later, detectives zeroed in on Mr. Kendrick, a disabled Army veteran and postal worker with no criminal record who resided in Ravenswood Houses. Mr. Kendrick – a Black man in his thirties wearing a white jacket – fit the generic description given by the child witness. Presuming guilt, police set out to build a case against him.

Mr. Kendrick agreed to go to the police station for questioning and allowed police to search his apartment that he shared with a roommate – expecting his cooperation would be viewed by police as indicative of innocence. During the search detectives recovered two pairs of high-top white sneakers, an army camouflage-style hat, and a purse that belonged to his estranged wife, who later testified at trial that it was indeed hers.

Felipe Rodriguez Exonerated of All Charges in '87 Queens Murder Case

Felipe Rodriguez Exonerated of All Charges in '87 Queens Murder Case

After the search, Brandon Rogers was brought in to identify the perpetrator in a lineup that included Mr. Kendrick. On the way to the precinct, he asked whether the “real murderer” would be in the lineup. A detective confirmed that he would be, in contravention of best practices and current New York law, which requires law enforcement to caution a witness that the alleged perpetrator may or may not be present. During the lineup, the 10-year-old witness identified a filler as the person who looked  “like the guy who stabbed the lady.” After learning that his first identification was incorrect, he selected Mr. Kendrick as his “second choice.”

To bolster the weak case against Mr. Kendrick, detectives re-interviewed Mario Aguilo, the second witness, who was an 18-year-old Ravenwood resident on probation for another crime. Mr. Aguilo previously told police that he had seen the victim on the ground, but did not see her assailant. After Brandon Rogers identified Mr. Kendrick, Mr. Aguilo made a statement claiming he saw Mr. Kendrick running towards his apartment building with a purse tucked under his arm.

Police returned to search Mr. Kendrick’s apartment for a second time. They found a purse on top of Mr. Kendrick’s television. Despite documentation that the purse was found in plain view, at trial, the prosecution suggested that this purse belonged to the victim and had been stashed behind the television.

At trial, after two days of deliberation the jury was deadlocked, prompting the judge to instruct the jury to work harder to try to reach a verdict. Ultimately, the jury found Mr. Kendrick guilty of second-degree felony murder and first-degree robbery. He was sentenced to 25 years to life for murder and 8 to 25 years for robbery. 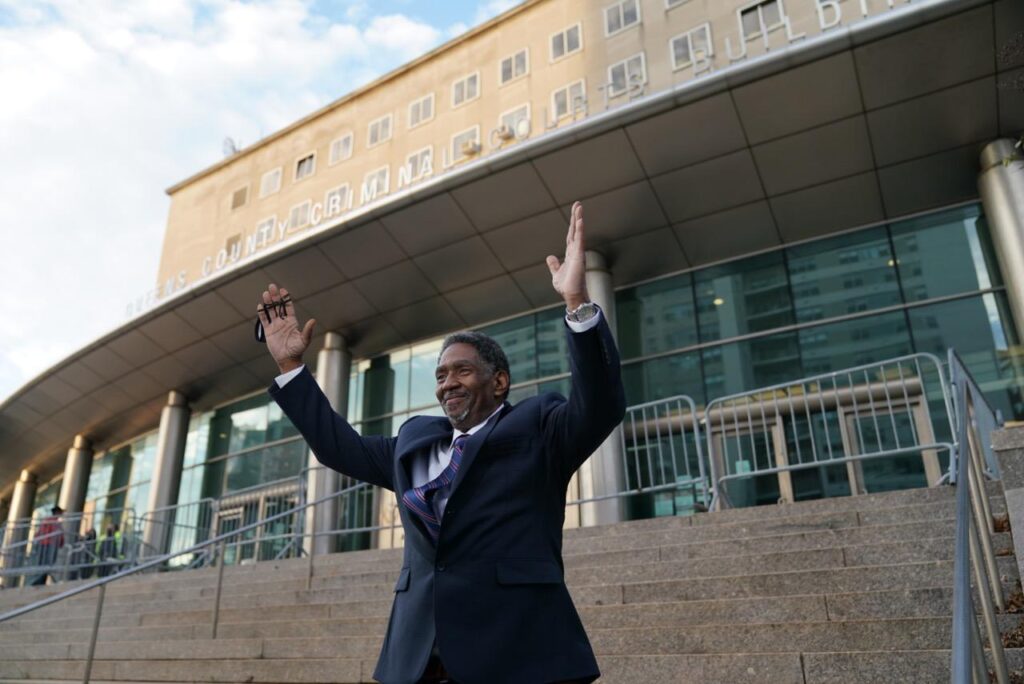 Jaythan Kendrick, who was freed and exonerated after 25 years, celebrates after his hearing in Queens on Nov. 19, 2020. (Image: Ben Hider for AP/ Innocence Project)

In 2016, Mr. Kendrick sought post-conviction DNA testing. DNA testing on the victim’s fingernails identified male DNA and Mr. Kendrick was excluded. In 2020, additional DNA testing was performed on the purse recovered from his apartment and alleged to have belonged to the victim. The victim’s DNA was not found on any part of the purse – showing it was not hers.

As an adult, Brandon Rogers recanted the identification he made as a 10-year-old, admitting “he never could identify the perpetrator’s face.” New evidence also emerged that supports his recantation. A witness who was visiting her family in the apartment below Mr. Rogers’ swore she also saw the attack but was unable to make an identification because of the distance.

Mr. Aguilo’s testimony has also been wholly discredited. According to Mr. Aguilo, he was returning from his girlfriend’s house when he allegedly witnessed Mr. Kendrick running with a purse under his arm and he subsequently approached the victim who was on the ground. However, in 2020, Mr. Aguilo’s girlfriend at the time of the crime insisted that she could not have been with him that day because she was in school– a point that was confirmed by school records. Likewise, two Ravenswood residents who were the first to respond to the victim stated that no one ever approached the victim. 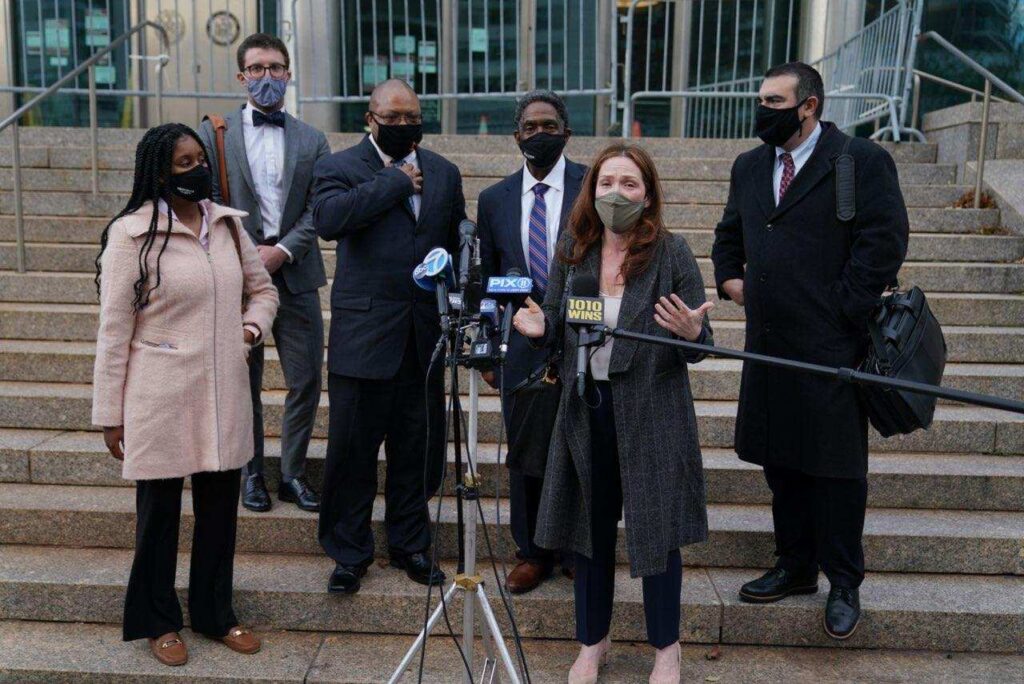 Eyewitness misidentifications have contributed to approximately 69% of the more than 375 wrongful convictions overturned by post-conviction DNA testing in the United States. In Mr. Kendrick’s case, the eyewitness testimony was examined by a leading expert in cognition and memory, who found that Brandon Rogers’ identification was unreliable. In 2017, New York enacted a law mandating scientifically-supported practices for police administration of eyewitness identification procedures.

Likewise, incentivized witnesses — people who are offered deals in exchange for incriminating information — contribute to 17% of wrongful convictions exonerated by DNA. The Innocence Project is committed to reforming the legal system to prevent wrongful convictions and ensure justice for all.