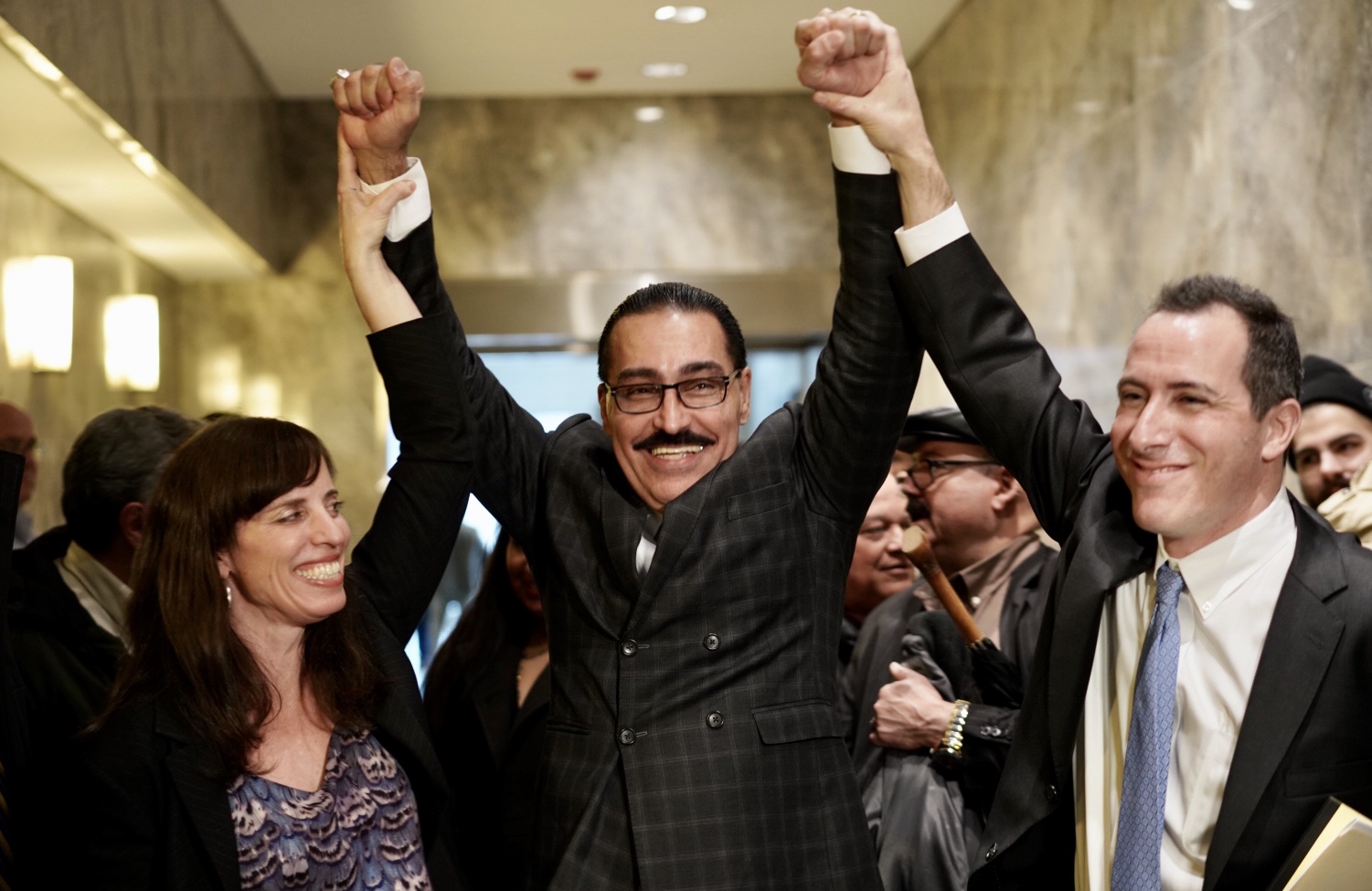 Felipe Rodriguez (center) after his hearing with his attorneys Nina Morrison, senior litigation counsel at the Innocence Project, (left), and Zachary Margulis-Ohnuma (right), at the Queens County Supreme Court on Dec. 30. Credit: Sameer Abdel-Khalek for the Innocence Project.

Three years ago, Felipe Rodriguez received what he thought would be the best news of his life: New York Governor Andrew Cuomo was commuting Rodriguez’s 25-years-to-life sentence. After spending more than 27 years in prison for a crime Rodriguez and his attorneys have maintained he did not commit, he was to be released.

But on Monday, after nearly 30 years of wrongful conviction, Rodriguez, an Innocence Project client for 13 years, received even greater news and a new beginning. The Queens County Supreme Court granted a motion to vacate Rodriguez’s 1990 conviction and entered an order dismissing all charges against him — exactly three years to the day that Gov. Cuomo granted Rodriguez a commutation.

In 1990, Rodriguez was convicted of the 1987 murder of Maureen McNeill Fernandez. Despite the commutation and release granted by Gov. Cuomo, the conviction against him remained. Until now.

The conviction was largely based on the testimony of police informant Javier Ramos, who was a suspect in the case himself. Ramos alleged that Rodriguez borrowed his car on the night of the murder and essentially admitted to the crime the following morning. But in a secretly recorded pretrial interview, Ramos admitted that he had repeatedly lied to the police and had been coerced into implicating Rodriguez in the crime.

However, none of this information was disclosed to the jury at Rodriguez’s trial. In 2017, Ramos admitted to fabricating his testimony against Rodriguez in an interview with a defense investigator and Zachary Margulis-Ohnuma, who represents Rodriguez together with the Innocence Project.

Today’s court decision came after a reinvestigation of Rodriguez’s case by the Queens County District Attorney’s Office revealed additional evidence in the police file had been unlawfully withheld from Rodriguez’s defense attorney. This evidence would have strongly supported Rodriguez’s innocence and directly contradicted key portions of the already weak case the state presented against him at the 1990 trial.

“[Today], the chains will fall … I will be absolutely, completely free.”

Judge Joseph Zayas of the Queens County Supreme Court noted that mistakes are made in the criminal justice system and that sometimes those mistakes are “minor” while at other times they are “monumental.”

“In your case, the miscarriage of justice took way too long to discover,” Judge Zayas said. “Mr. Rodriguez, you deserved better than that.”

The decision was met with applause by Rodriguez’s family, friends, legal team, and other exonerees who attended the hearing to support him.

“We are thrilled that Felipe is finally cleared of this wrongful conviction, and grateful to the DA’s Office for reinvestigating the case, providing us with key documents they uncovered and joining our motion to vacate,” said Nina Morrison, senior litigation counsel at the Innocence Project.

“But amidst the joy of today’s exoneration, let’s not forget that Felipe’s wrongful conviction could well have been prevented three decades ago if he’d received a fair trial and the jury had heard the evidence presented in court today,” she added.

In early 2019, New York passed a criminal justice reform package that made key reforms to the bail system and discovery process — the process by which evidence is disclosed prior to trial. Prior to the passing of these laws, which go into effect on January 1, New York had one of the four worst discovery statutes in the country.

“Mr. Rodriguez, you deserved better than that.”

In particular, the “blindfold law” prevented defendants, including those who are innocent, from accessing the evidence against them in their cases. The law did not require such evidence to be disclosed to defendants during discovery, hindering attorneys’ ability to fully investigate cases, contributing to the wrongful conviction of innocent people. As a result of the state’s poor discovery statutes, defense attorneys also lacked access to key evidence, such as witness statements and police reports, further hampering their ability to advise their clients and develop effective cases.

“Felipe Rodriguez is an inspiration to all of us in his tireless quest to prove his innocence, and in his kindness and generosity to everyone he has encountered in and out of prison over the last 30 years,” said Margulis-Ohnuma. “It’s an honor to stand next to him as his wrongful conviction is finally cleared from his record and he begins a new chapter of his life.” 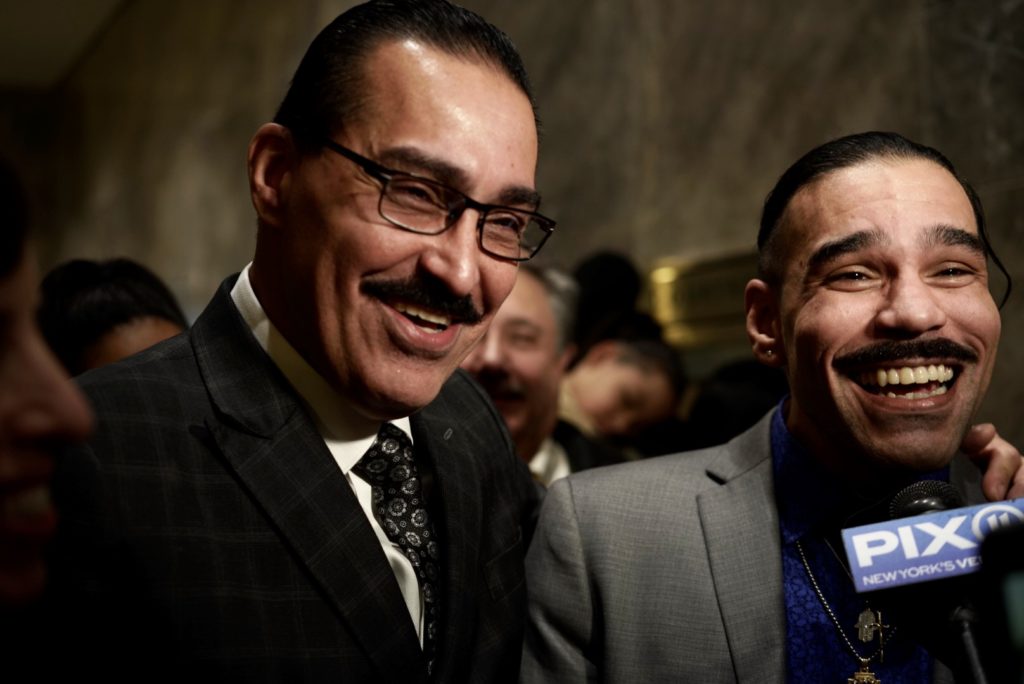 Felipe with his son, Felipe Jr., after his hearing. Credit: Sameer Abdel-Khalek for the Innocence Project.

Since being released in 2017, Rodriguez has been able to spend time with his son, Felipe Jr., who was just three years old when his father was wrongfully convicted. He has also secured a job in the hospitality industry and is a member of the Hotel Trades Council Union. He lives with his wife, Karen, and her two children.

He plans to celebrate his freedom and the start of the new year with friends and family.

“I’ve been waiting for this a long time. This is something that my life has revolved around — and this means the world to me,” said Rodriguez.