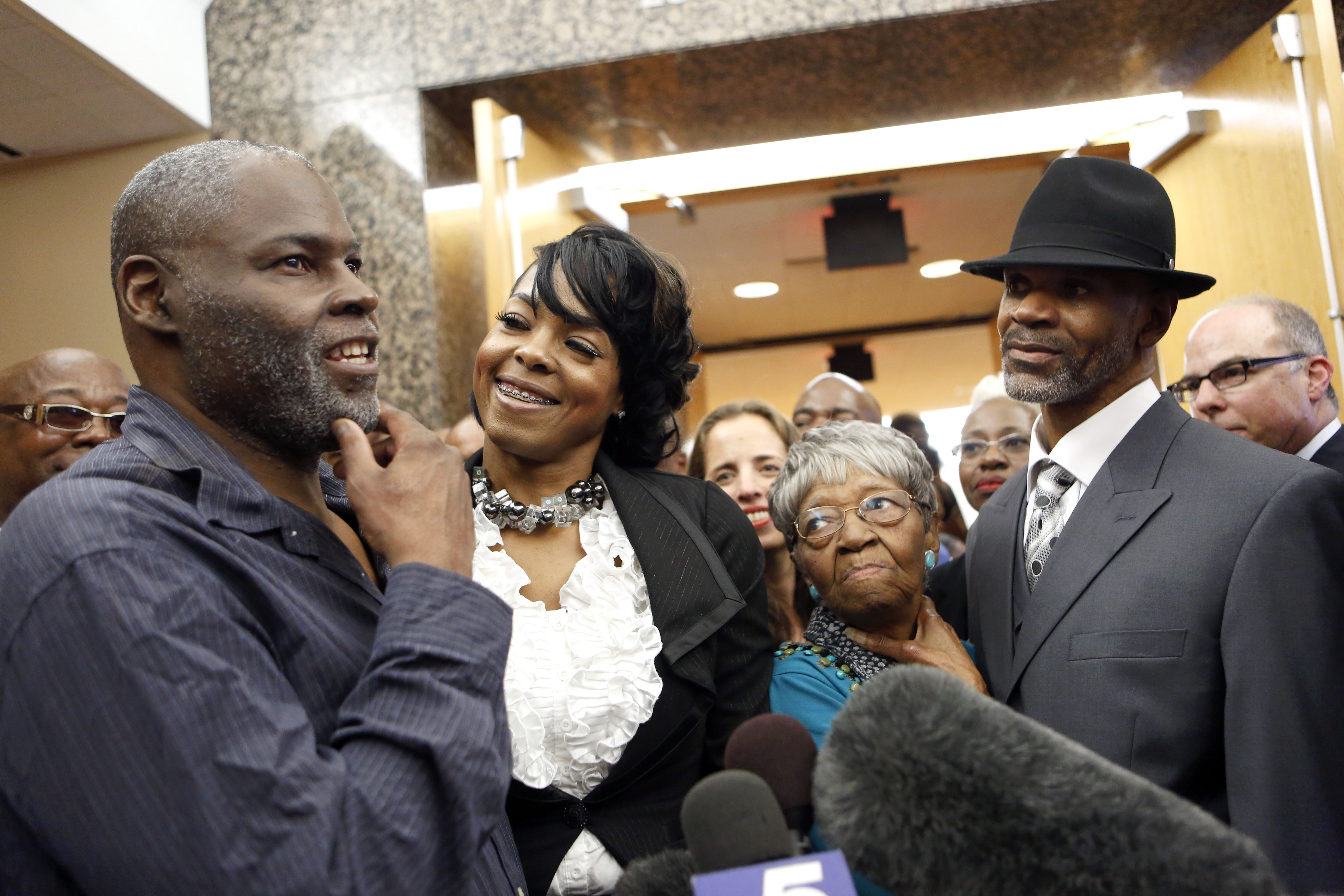 Stanley Orson Mozee, (left) represented by the InnocenceProject, with his daughter, LaTonya Mozee, (second from left) and Dennis Lee Allen, (right) represented by the Innocence Project of Texas, with his grandmother, Opealean Smith, (second from right), celebrate their freedom after Judge Mark Stoltz overturned their convictions on Tuesday, Oct. 28, 2014. (Image: Lara Solt)

When Dennis Allen learned that the former Dallas County prosecutor Richard “Rick” Jackson had been disbarred, he felt “fabulous.”

But, Mr. Allen clarified, his joy stemmed not from Mr. Jackson’s punishment, “but from this huge step in the right direction towards justice. I just felt happy and overjoyed that finally we’re making real progress towards justice for everyone,” he said.

In 2000, Mr. Jackson, then a Dallas County assistant district attorney, withheld evidence from two innocent men on trial for murder: Mr. Allen and Stanley Mozee. Both men were sentenced to life in prison and spent 15 years incarcerated for a crime they didn’t commit, while evidence that could have proven their innocence sat in Mr. Jackson’s files the entire time. 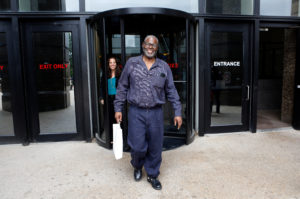 Stanley Orson Mozee, represented by the Innocence Project and attorney Nina Morrison (background), takes his first steps on the outside after Judge Mark Stoltz overturned his conviction for murder because of prosecutorial misconduct at the Frank Crowley Courts Building on Tuesday, Oct. 28, 2014. (Image: Lara Solt)

Mr. Allen and Mr. Mozee were freed in 2014 after Mr. Jackson’s misconduct was discovered. Mr. Jackson had already retired from practicing law the year before, after being fired by the Denton County district attorney’s office, the Dallas Morning News reported.

The state bar agreed that Mr. Jackson had engaged in “professional misconduct” and filed formal disciplinary charges against him. In response, Mr. Jackson surrendered his law license to avoid disciplinary action — effectively meaning he has been disbarred and will no longer be able to practice law in the state of Texas. The Texas Supreme Court wrote in its order revoking Mr. Jackson’s law license last month that “Richard E. Jackson’s resignation is in the best interest of the public, the profession, and Richard E. Jackson.”

Mr. Jackson is one of only four prosecutors who has been disbarred for misconduct — the most serious disciplinary action that can be taken against a prosecutor — as opposed to being suspended or “reprimanded” by the state bar. Mr. Mozee said he hopes that Mr. Jackson will now reflect on his actions after losing his license.

“I’m not a person who holds grudges and I don’t have hard feelings toward anybody or towards the judicial system, but it’s exciting to me to know he’s been held accountable,” he said.

“I also want people to know that even though someone heard my humble cry and was able to reach out and help me prove my innocence and this has happened, there are still so many more people in there that are fighting serious cases in which they’re actually innocent.”

Prosecutorial misconduct played a role in approximately 31% of exoneration cases to date, but just 4% of prosecutors whose misconduct contributed to a wrongful conviction have ever faced any kind of personal or professional discipline, according to the National Registry of Exonerations. Only one prosecutor, another former Texas district attorney, has ever been jailed for their misconduct.

“It’s impossible to overstate just how horrific the consequences were of Mr. Jackson’s actions,” said Innocence Project Senior Litigation Counsel Nina Morrison, who represented Mr. Allen and Mr. Mozee. “They were sentenced to life in prison and could well have served that entire time and died in prison had Mr. Jackson himself not preserved the evidence of their innocence in his own files.”

Because prosecutors can claim “absolute immunity” from civil liability under current law, Mr. Jackson and most other prosecutors who have committed misconduct at trial cannot be sued for money damages, even in the most egregious cases of misconduct.

“There’s a growing awareness among the public about the enormous power and discretion of prosecutors, and like police officers when they are caught flagrantly and openly abusing that power with devastating consequences, the public is increasingly demanding accountability,” Ms. Morrison said.

Mr. Allen said he also hopes the news will help make people who could potentially be swept up in the system aware of the prevalence of prosecutorial misconduct in wrongful convictions cases.

“I think about people like me who didn’t know that this can happen or don’t have a reason to think about this kind of stuff — when they see this it’s going to shed light on what’s really happening in our system and why change is needed,” he said.