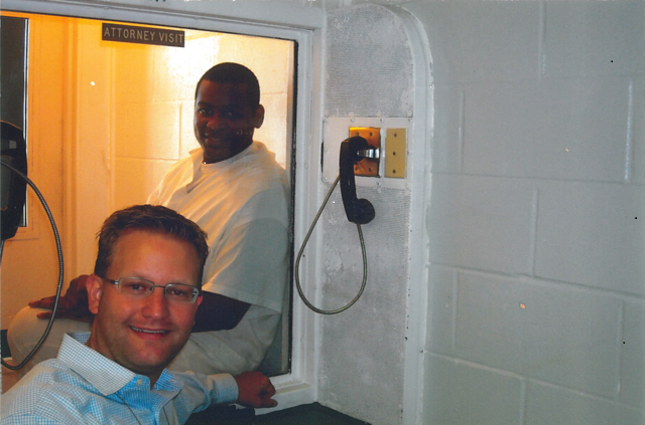 Brian Stolarz visiting his client Dewayne Brown in a Texas prison. Brown's case was featured in "The Innocence Files" series for the pervasive prosecutorial misconduct. Photo courtesy of Brian Stolarz.

“The prosecutor has more control over life, liberty and reputation than any other person in America.” – Former U.S. Attorney General and Supreme Court Justice Robert H. Jackson

Prosecutors hold tremendous power, having wide discretion in whether or not to bring criminal charges against someone and what those charges should be. But they also have constitutional obligations to ensure that those accused of a crime receive all the evidence that might aid the accused person’s defense before trial.

Prosecutorial misconduct occurs when a prosecutor intentionally breaks a law or a code of professional ethics while prosecuting a case.

“Prosecutors have demanding jobs and high caseloads, and we recognize that they sometimes make honest mistakes,” says Innocence Project senior litigation counsel Nina Morrison. “Sometimes those mistakes are serious enough that a person convicted of a crime will be entitled to have his or her conviction thrown out, even if the prosecutor didn’t intend to violate the convicted person’s rights.”

In some of those cases, however, the violation is not an accident and rises to the level of intentional misconduct. “In a disturbing number of cases,” Morrison explains, “we have found documents or notes hidden in a prosecutor’s case file containing information that would have directly supported our client’s innocence defense, but which was held back by the prosecutor at trial and kept hidden for decades. And in other cases, credible leads to suppressed evidence can’t be pursued because the original files are destroyed, or witnesses have died or gone missing.”

Prosecutorial misconduct occurs when a prosecutor intentionally breaks a law or a code of professional ethics while prosecuting a case. While prosecutors are responsible for following the law themselves and making sure that those in law enforcement who work on an investigation or prosecution do the same, “prosecutorial misconduct” is a term typically reserved for serious and intentional violations.

It is difficult to know the full extent of the problem, in part because prosecutors often are the ones who control access to evidence needed to investigate a claim of misconduct.  But we do know that some prosecutors prize winning a conviction over complying with their constitutional obligations, resulting in error and, in some cases, intentional misconduct. Despite this, there are no reliable systems for holding prosecutors accountable for their misdeeds. Under current United States Supreme Court precedent, prosecutors are frequently granted “immunity” from civil lawsuits (meaning they cannot be sued by a wrongly convicted person) even when they intentionally violate the law, making oversight by public agencies and the courts all the more critical.

“We know that official findings of misconduct represent only a fraction of the misconduct that actually occurs.”

In Berger v. United States, 295 U.S. 78 (1935), Justice Sutherland characterized prosecutorial misconduct as “overstepp[ing] the bounds of that propriety and fairness which should characterize the conduct of such an officer in the prosecution of a criminal offense.” In the years since Berger, advocates for the wrongly convicted have increasingly focused on prosecutors’ failure to disclose favorable evidence – what are known as “Brady” violations, after the 1963 case of Brady v. Maryland – as one of the most harmful and pervasive forms of prosecutorial misconduct.

In the Dewayne Brown case, for example, a long-buried email chain uncovered more than a decade after Brown’s trial revealed that the trial prosecutor, Dan Rizzo, had deliberately hidden phone records from Brown’s defense attorney that supported Brown’s alibi. Those records might have stayed hidden forever had the police officer who originally obtained them not saved and found a copy in his garage while Brown was wrongfully incarcerated on death row. It was only after the original records were turned over and Brown was released from death row that a special prosecutor assigned to the case concluded that Rizzo not only knew about the phone records before trial, but had knowingly concealed them from Brown’s defense team. 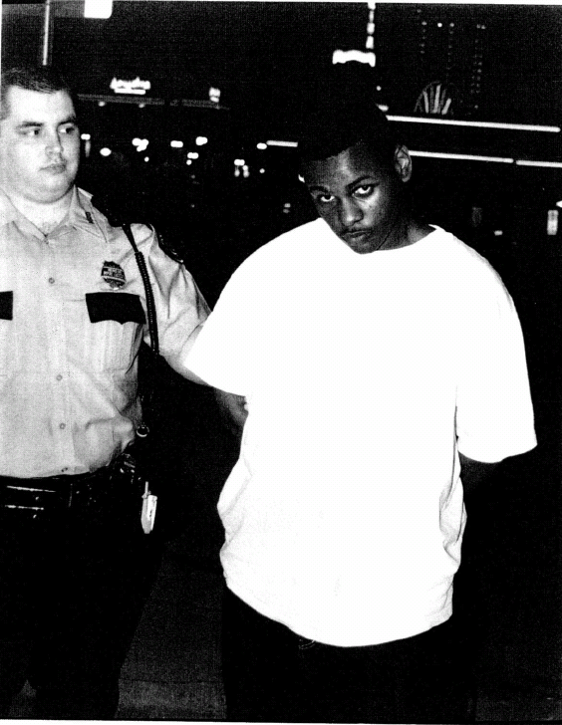 Dewayne Brown when he was arrested as a suspect for a double murder in Texas he didn’t commit. Photo courtesy of Brian Stolarz.

Another example is the case of Stanley Mozee and Dennis Allen, who were both exonerated in Dallas, Texas, in 2019 after spending more than 15 years in prison for a murder they did not commit. Their joint exoneration was based on documents located in the files of the trial prosecutor, Rick Jackson, showing that he’d knowingly put on false testimony from several jailhouse informants and suppressed key evidence from eyewitnesses that would have strongly supported Mozee’s and Allen’s innocence claims. 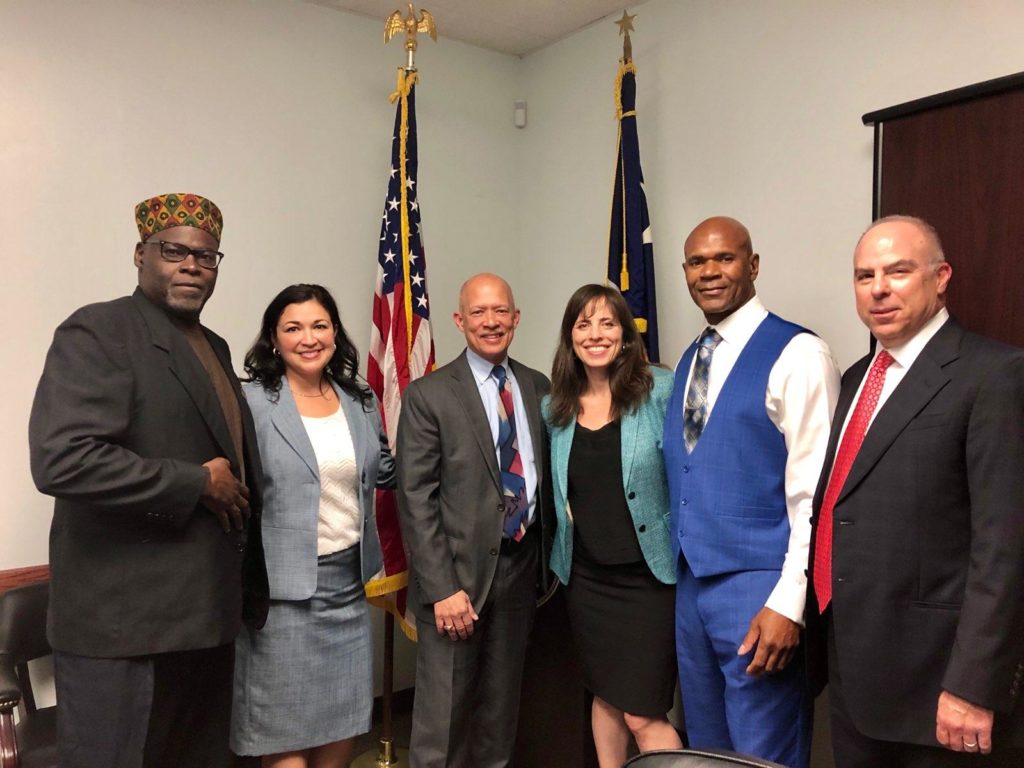 A survey conducted by the Innocence Project, Innocence Project New Orleans, Resurrection After Exoneration and the Veritas Initiative looked at five diverse states over a five-year period (2004-2008) and identified 660 cases in which courts found prosecutors committed misconduct, such as tampering with key evidence, withholding evidence from the defendant or coercing a witness to give false testimony. In 527 cases, judges upheld the convictions, concluding that the prosecutorial error did not impact the fairness of the defendant’s original trial. In 133 cases, convictions were thrown out. Of the 660 cases examined, only one prosecutor accused of misconduct was disciplined.

In 2013, ProPublica reporter Joaquin Sapien issued a report that focused on New York City prosecutors. Sapien examined New York state and federal court rulings between 2001-2011 and identified 30 cases in which “judges explicitly concluded that city prosecutors had committed harmful misconduct.” In all of the cases Sapien reviewed, however, only one prosecutor was removed from office for misconduct – and even that prosecutor was not removed until he was caught committing a second ethical violation. Although many cases were similarly concerning, the prosecutors were not sanctioned.

“We know that official findings of misconduct represent only a fraction of the misconduct that actually occurs,” explains Morrison. “It is very difficult to find proof of misconduct that by definition is designed to stay hidden – especially when prosecutors hold so much power to control access to what’s in their files and to witnesses. But the disparity between even the rare, official findings of misconduct and actual consequences for the prosecutors involved is enormous. Often, the bar discipline committees that are charged with investigating these cases are overwhelmed with other cases, lack expertise in criminal law or, in some cases, are biased in favor of prosecutors and give them every benefit of the doubt.”

“It is very difficult to find proof of misconduct that by definition is designed to stay hidden.”

Despite the difficulties in holding prosecutors accountable for misconduct, the Innocence Project remains committed to this work. Morrison describes the three key areas of work on which she is currently focusing to implement change:

“First, we are trying to hold prosecutors accountable for serious misconduct when it occurs as a way to deter future misconduct and to prevent future wrongful convictions. This work ranges from filing formal complaints against these prosecutors in the states where they are licensed to practice law—which could result in their suspension from practice, or even disbarment—to a major civil rights lawsuit we filed against the District Attorney’s Office in New Orleans, Louisiana, on behalf of an exoneree wrongly prosecuted by an office whose misconduct was so longstanding and pervasive that it effectively meets the demanding legal test for an ‘official policy.’

Second, we’re trying to improve the legal systems that are designed to hold prosecutors accountable but, too often, fall short. This ranges from strengthening the ones that don’t work well or quickly enough, and urging states to experiment with new systems devoted to the particular duties of prosecutors—like prosecutorial conduct commissions and court orders for compliance with discovery rules.

Finally, we’re trying to prevent misconduct before it occurs. We urge states and prosecutors’ offices to expand what’s known as pretrial “discovery”—the rules that require prosecutors to turn over evidence to someone accused of a crime. Early, open and mandatory discovery is a systematic change that makes it much easier for prosecutors to avoid mistakes, and much harder for those who might be tempted to cheat to get away with hiding evidence of a person’s innocence.”

What To Expect From "The Innocence Files," Netflix's New Documentary Series

What To Expect From "The Innocence Files," Netflix's New Documentary Series

As Innocence Project client Michael Morton, who wrongly spent 25 years in prison for murder because the prosecutor hid key evidence of his innocence – and whose case is still the only one in the U.S. in which a former prosecutor has ever been jailed for misconduct that caused a wrongful conviction – has said, “Accountability works. It’s social glue… Because if you’re not accountable, you can do anything.”