“We are collectively demanding today that not one more person suffer under our wrongful conviction problem.” 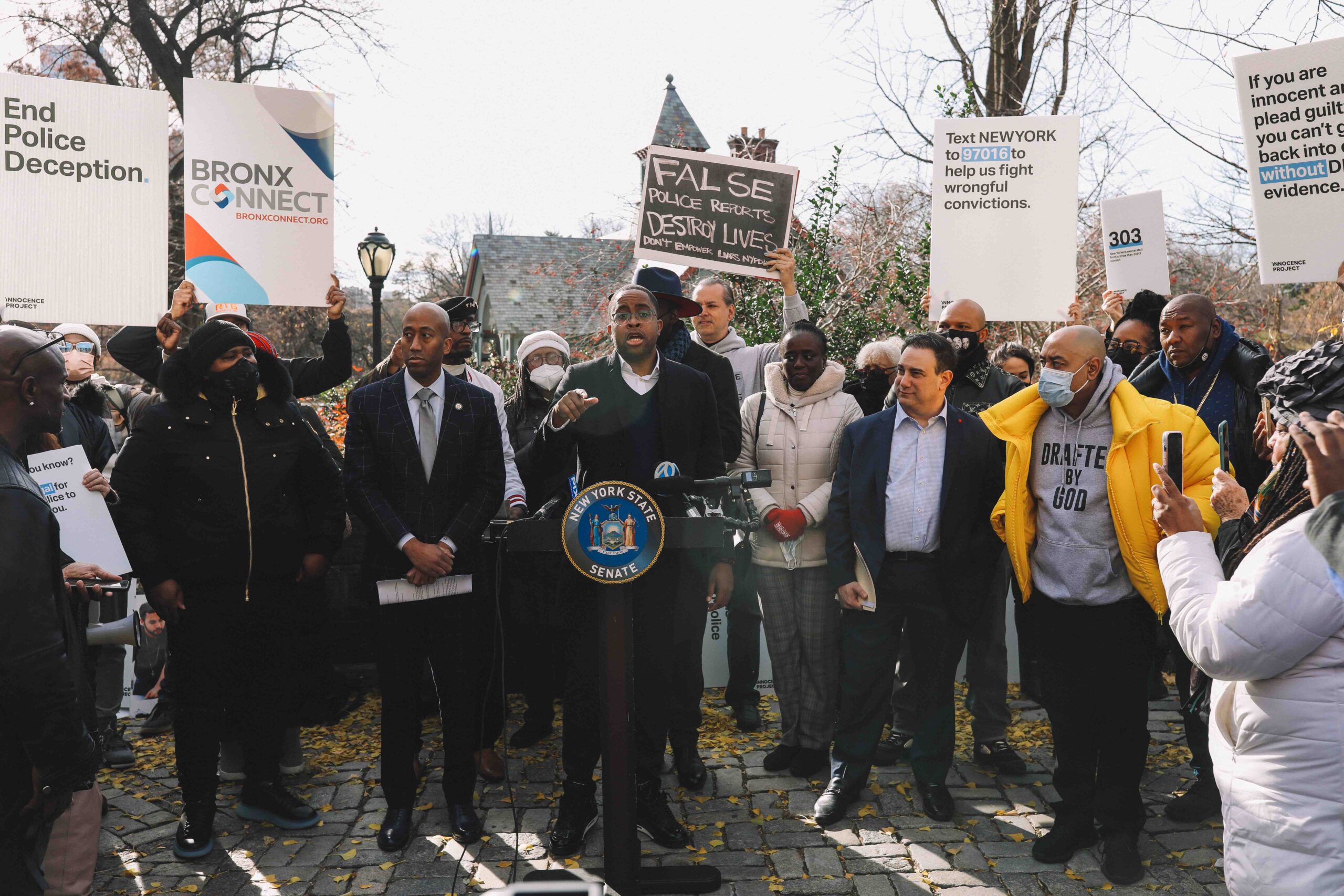 New York State Sen. Zellnor Myrie and Assemblyman Clyde Vanel unveiled a promising package of bills that will reveal and prevent wrongful convictions in the state of New York on Dec. 15.

“I ask you today, would you spend a day incarcerated for a crime you did not commit?” said Sen. Myrie, a co-sponsor of two of the three bills in the package.

The elected officials were joined by Kevin Richardson, Yusef Salaam, and Raymond Santana —members of the Exonerated Five — at the corner of Central Park, a site of significance for the men who were wrongly convicted of assaulting a jogger in the park in 1990. Police interrogated all five of the teenagers accused of the assault separately, lying to each of them, including telling them that evidence implicated their guilt to coerce confessions, though no such evidence existed. 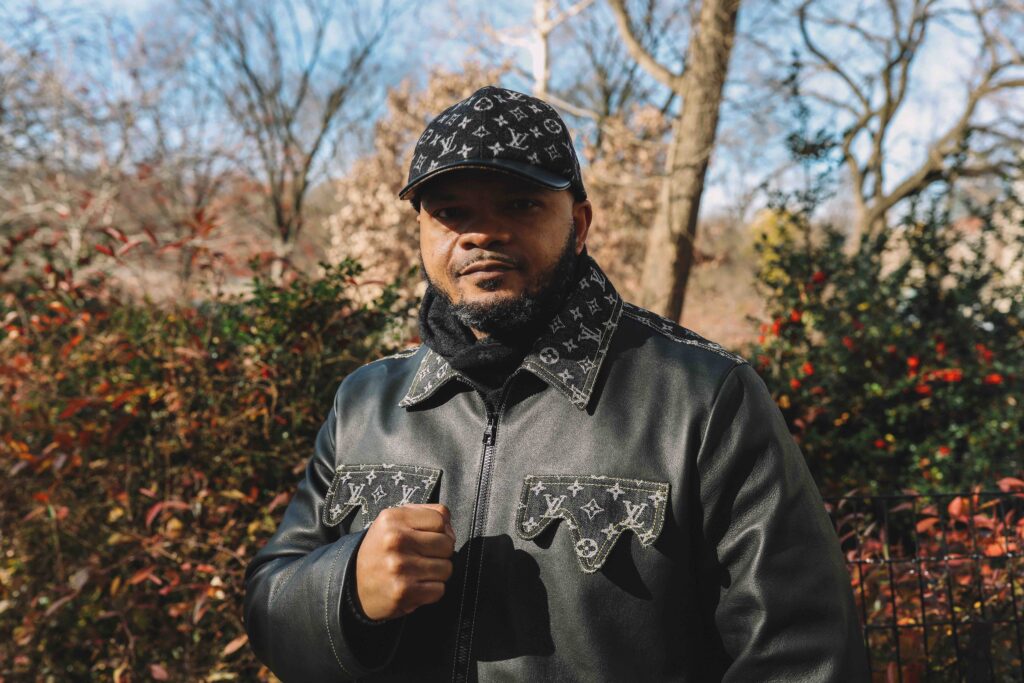 The men urged dozens of community members who gathered to listen to support the bills, which would prevent the same deceptive tactics employed against them as children to be used against others.

“It’s about accountability,” Mr. Richardson said. “These things have been going on way too long. Right in this park right here, which is our backyard, they labeled us a ‘wolfpack.’ They called us animals. They said we deserve to be hung from the same place that we grew up from.”

To date, 303 New Yorkers have been exonerated of crimes they didn’t commit, while thousands more may still be behind bars because of the use of coercive and unreliable police tactics that lead to wrongful conviction.

“This isn’t a Democrat or Republican issue. This is a moral imperative. This is an issue of the heart.”

“This isn’t a Democrat or Republican issue. This is a moral imperative. This is an issue of the heart,” Sen. Myrie said. “We are innocent before we are proven guilty. We are collectively demanding today that not one more person suffer under our wrongful conviction problem.”

The package of bills includes one that would ban the use of deceptive police interrogation tactics and would require confessions to be assessed for reliability before they are allowed as evidence in court. Currently, law enforcement can legally lie to adults during interrogations in all 50 states. Last year, Illinois and Oregon became the first states to ban deception during interrogations of minors only.

Another of the package’s bills — the Challenging Wrongful Convictions Act — would allow people who pleaded guilty to crimes they did not commit to file post-conviction claims to have their cases reviewed and convictions overturned in cases that do not have DNA evidence. In New York, people with claims of innocence are currently only able to get back into court if DNA evidence in their case could prove their innocence. This requirement is extremely limiting as biological evidence that could prove guilt or innocence exists in less than 10% of criminal cases.

Of the more than 2,900 people who have been exonerated since 1989, more than 20% pleaded guilty to crimes they didn’t commit, according to the National Registry of Exonerations. Often, innocent people plead guilty because they are coerced, don’t think they will win at trial, and are facing incredibly harsh penalties if they take their chances on going to trial.

The third and final bill in the package — the Youth Right to Remain Silent Bill — would protect minors in contact with law enforcement by requiring that they consult an attorney before waiving their Miranda Rights. Members of the Exonerated Five said that had such a law existed at the time of their arrest, it may have prevented their wrongful convictions and many others.

Take a look at highlights from the rally below.

Add your name to help us win reforms in New York

Add your name to help us win reforms in New York 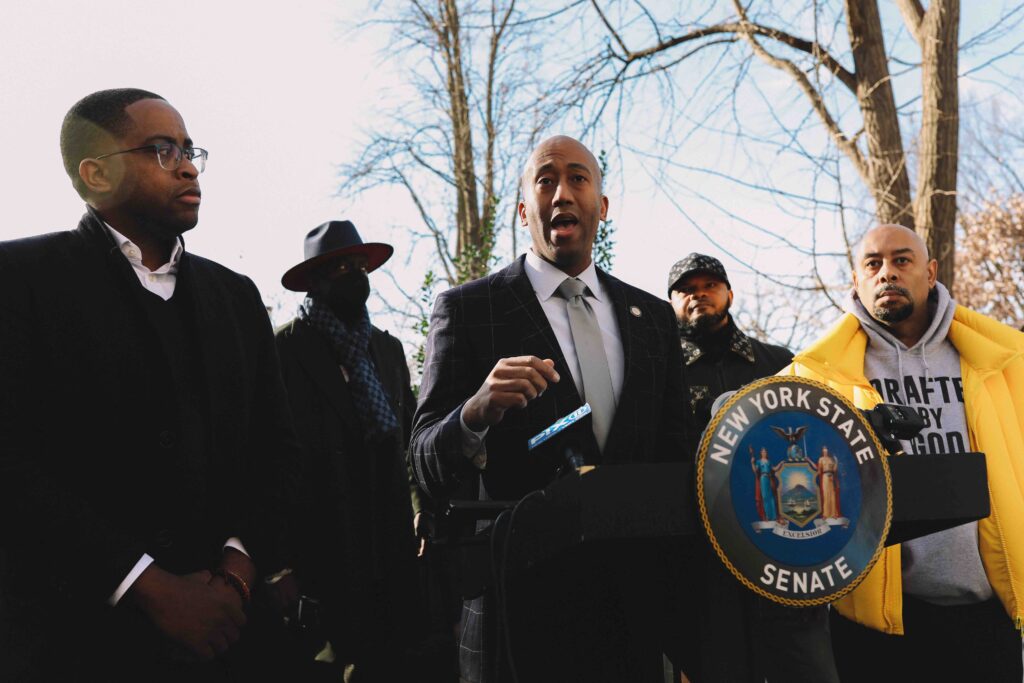 “This is the Empire State. But this shouldn’t be the Empire State of wrongful convictions. Right? That is a shame… And we want to make sure that no innocent person spends time in jail and in prison.” 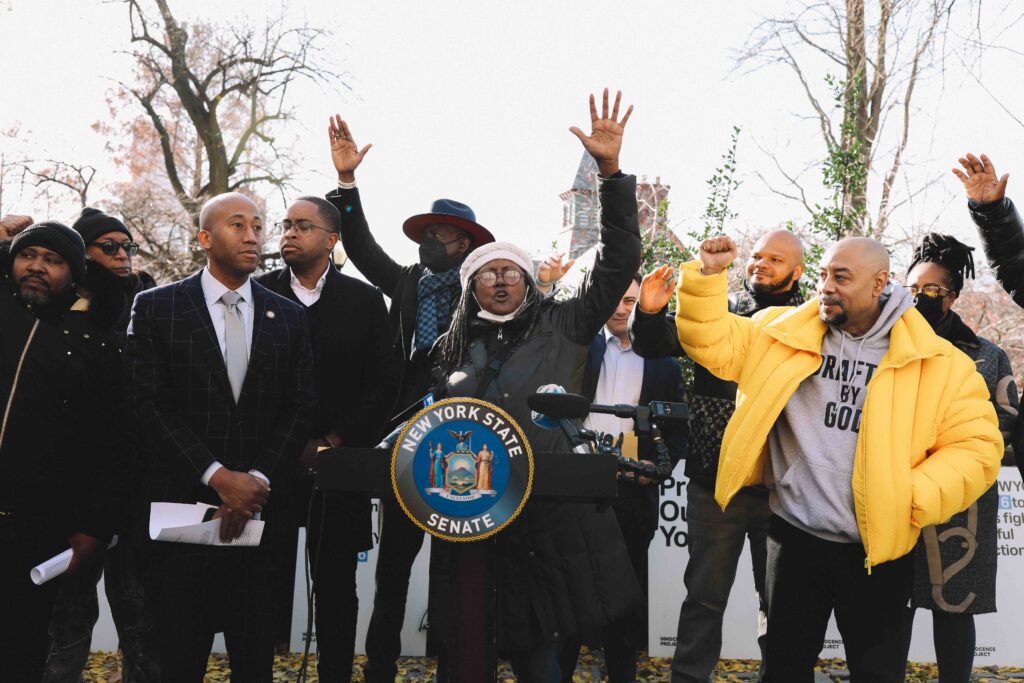 “I’m pleased that bills and other opportunities for the wrongfully incarcerated people of New York City, in particular New York State, have an opportunity for the justice they so justly deserve. I remember years ago, when I was going through this process, we didn’t have this kind of opportunity … I want people to stand up and start fighting with me. We got to take this fight on to the end. We got to win because our people depend on this victory. We need you all to be a part of it.” 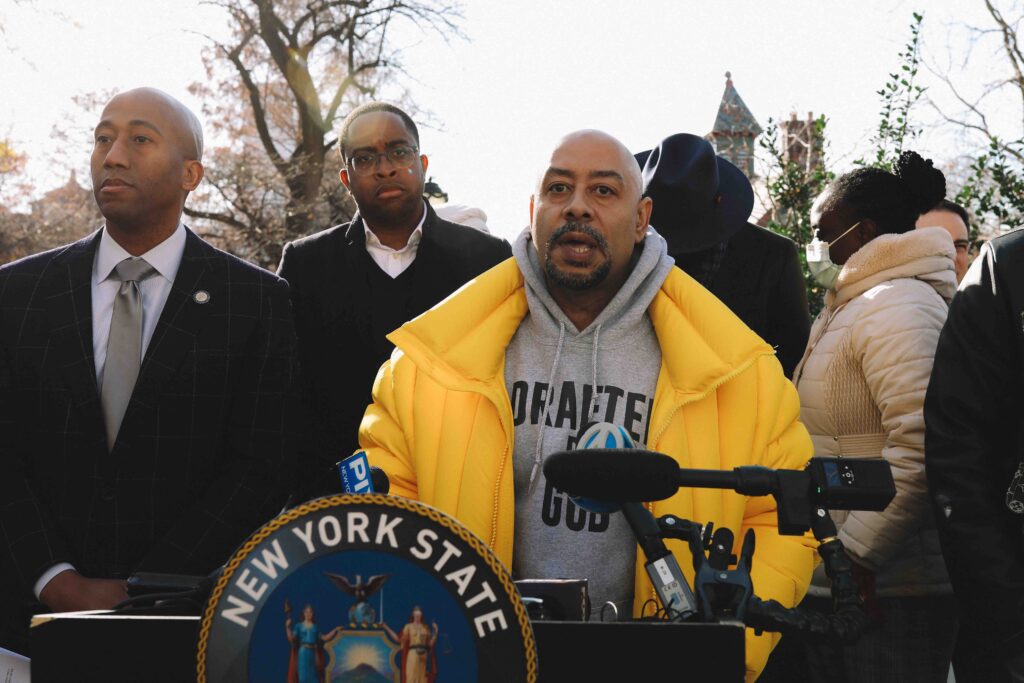 “You see it on Law and Order and CSI, the good cop, bad cop, right? The interrogation process, right? False convictions like it’s all there, it’s real. It happens everyday, there’s a system that has been running for a long time, at a fast pace, and it locks up our children at an alarming rate. And it does that all around the country. And so this is the opportunity for us to step forward and to make that voice be heard.” 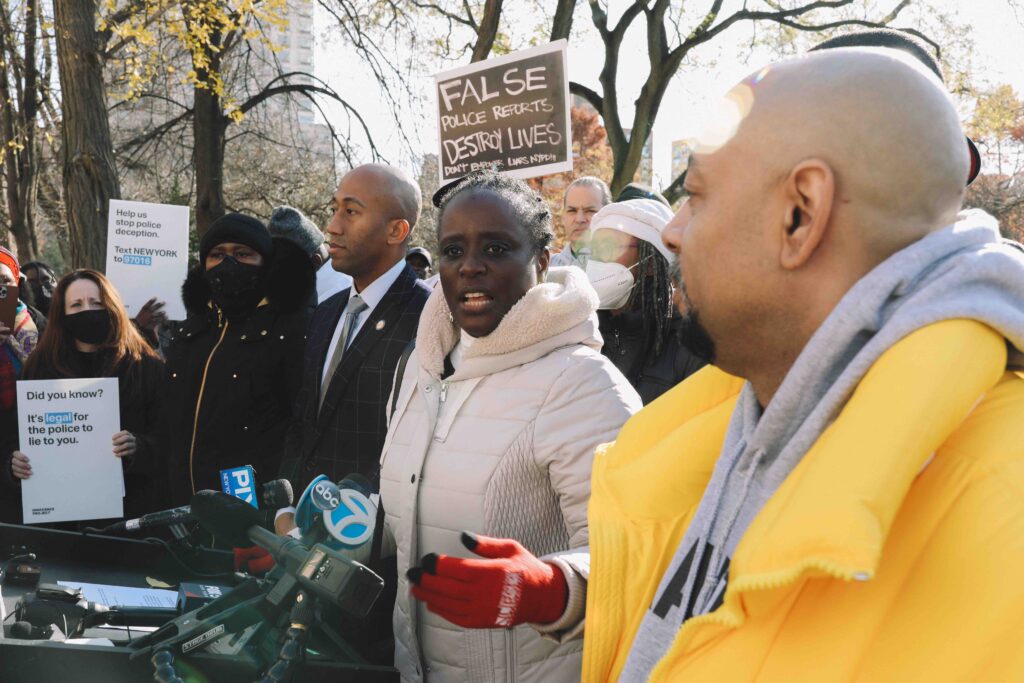 The wrongful conviction of the Exonerated Five “hurt this community so much, and it wasn’t just these young men, there were other people involved, before them with them. And since them. What you’re doing today is going to help for the future.” 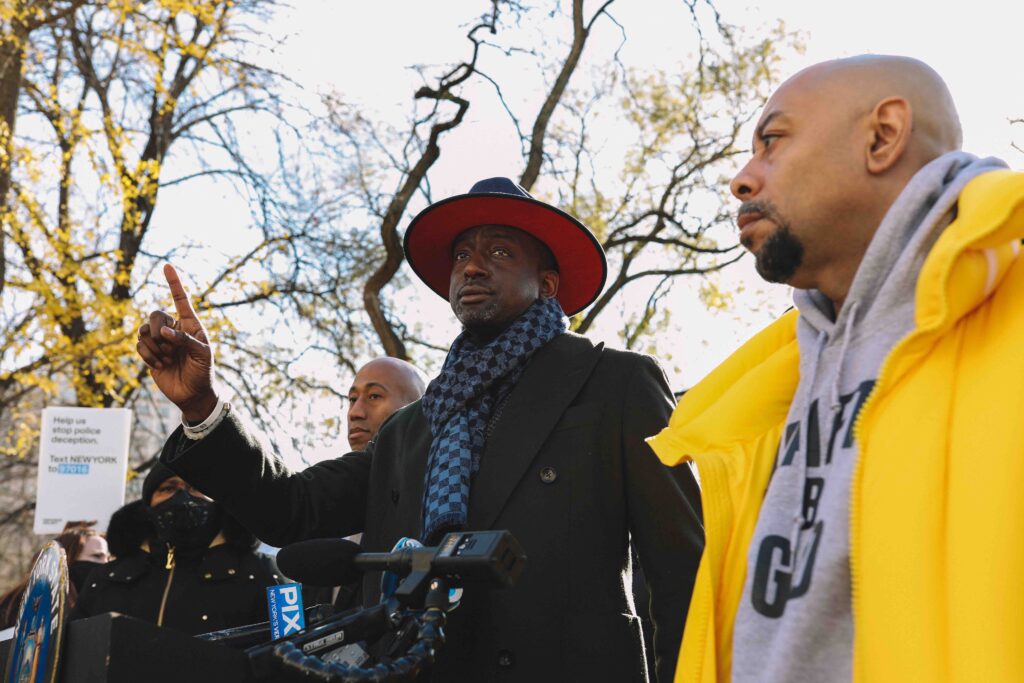 “I want you all to understand about what’s at stake when they criminalized and vilified us, that allowed for the real perpetrator to continue to commit more crimes.” 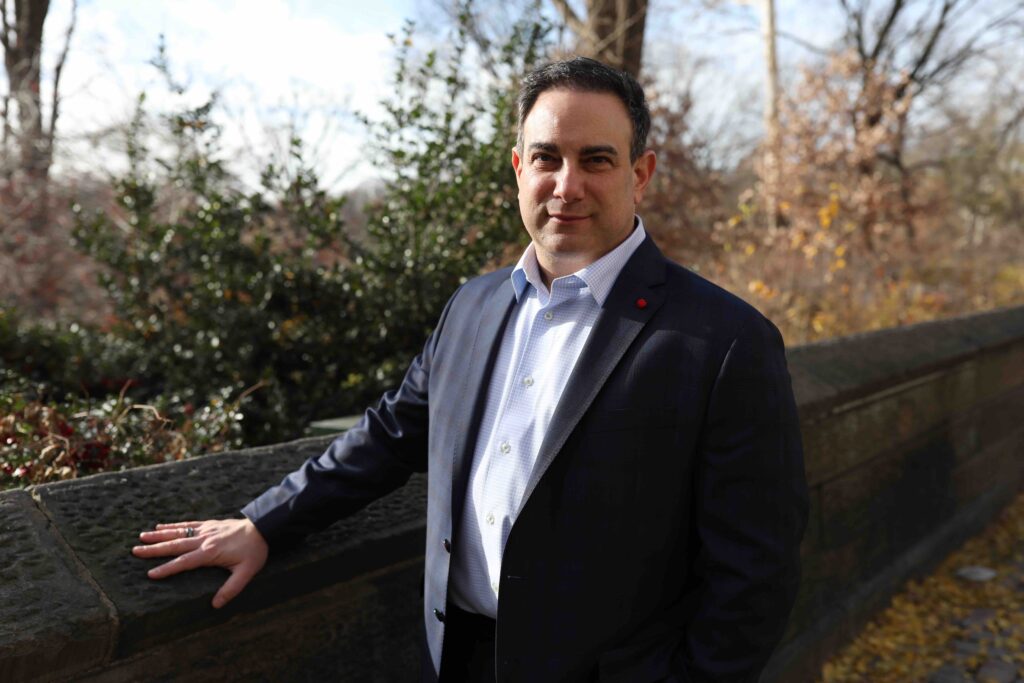 Marty Tankleff at a rally in Central Park on Dec. 15, 2021 where he helped introduce a criminal justice legislative package. (Image: Elijah Craig/Innocence Project)

“In 1988, I was 17 years old. I was accused of killing my parents in my own home by law enforcement. I was interrogated for hours, no recording. I was convicted and sentenced to 50 years to life. If New York State had their way, I’d been in New York state prison or dead somewhere. But I wasn’t gonna give up because the brothers behind me and so many others, reinforced to me that we can’t give up, we have to continue fighting.” 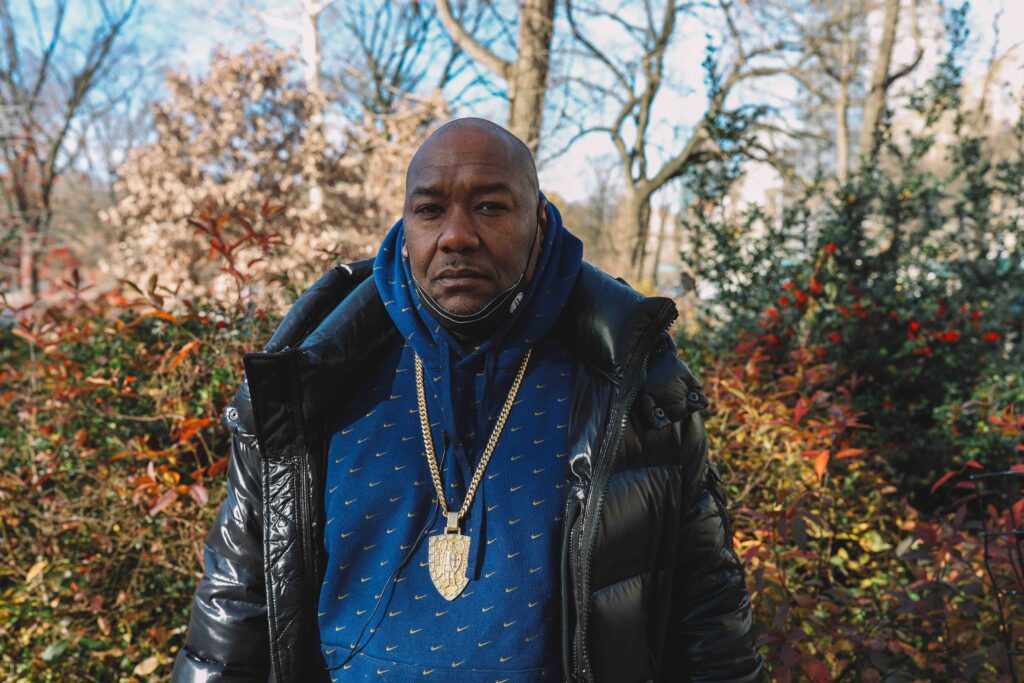 Derrick Hamilton at a rally in Central Park on Dec. 15, 2021 where he helped introduce a criminal justice legislative package. (Image: Elijah Craig/Innocence Project)

“In 2014, when I was out on parole, the Appellate Division for the first time in New York history, in my case, People vs. Hamilton ruled that an innocent person should have recourse to judicial relief. Yet, a few years later, the New York State Court of Appeals passed a decision that said my decision was now limited to only people that went to trial. Yet I knew that there was so many innocent men that pled guilty that got left behind in prison, that write to me every single day. And they say, ‘what about me? Why can’t I get out? I’m a human being. I’m just like you. What makes you any different than me’. And I say to them ‘nothing. The prejudice of a judicial system.’ I stand here today to beg the legislator to treat every human being the same. Everybody. When you said there’s no discrimination, those guys that sit in prison, that pled guilty to have evidence of innocence speaks different. I asked the legislator to pass a law that says no innocent person should be left in New York State Department of Correctional Services for any reason. If our system is about innocent of guilt, every innocent person should be let go.” 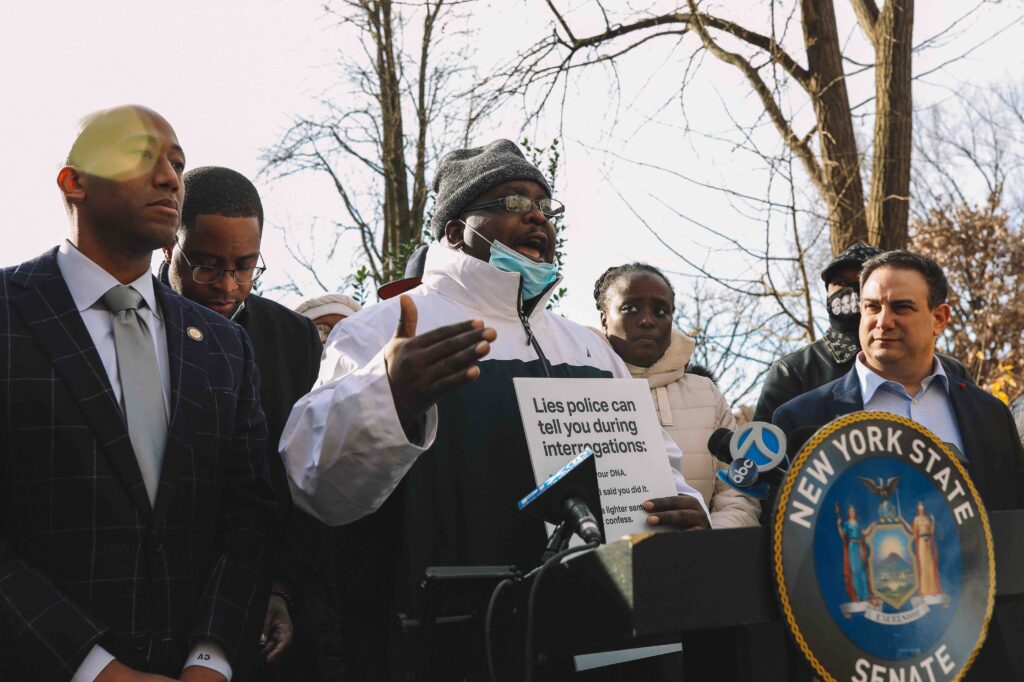 “I spent 15 years in state prison … We need to fight, we need to bring it to them, we need to pass all of these bills.”