Julius Jones Should Not Be Executed

The life of an innocent man in Oklahoma is at stake. 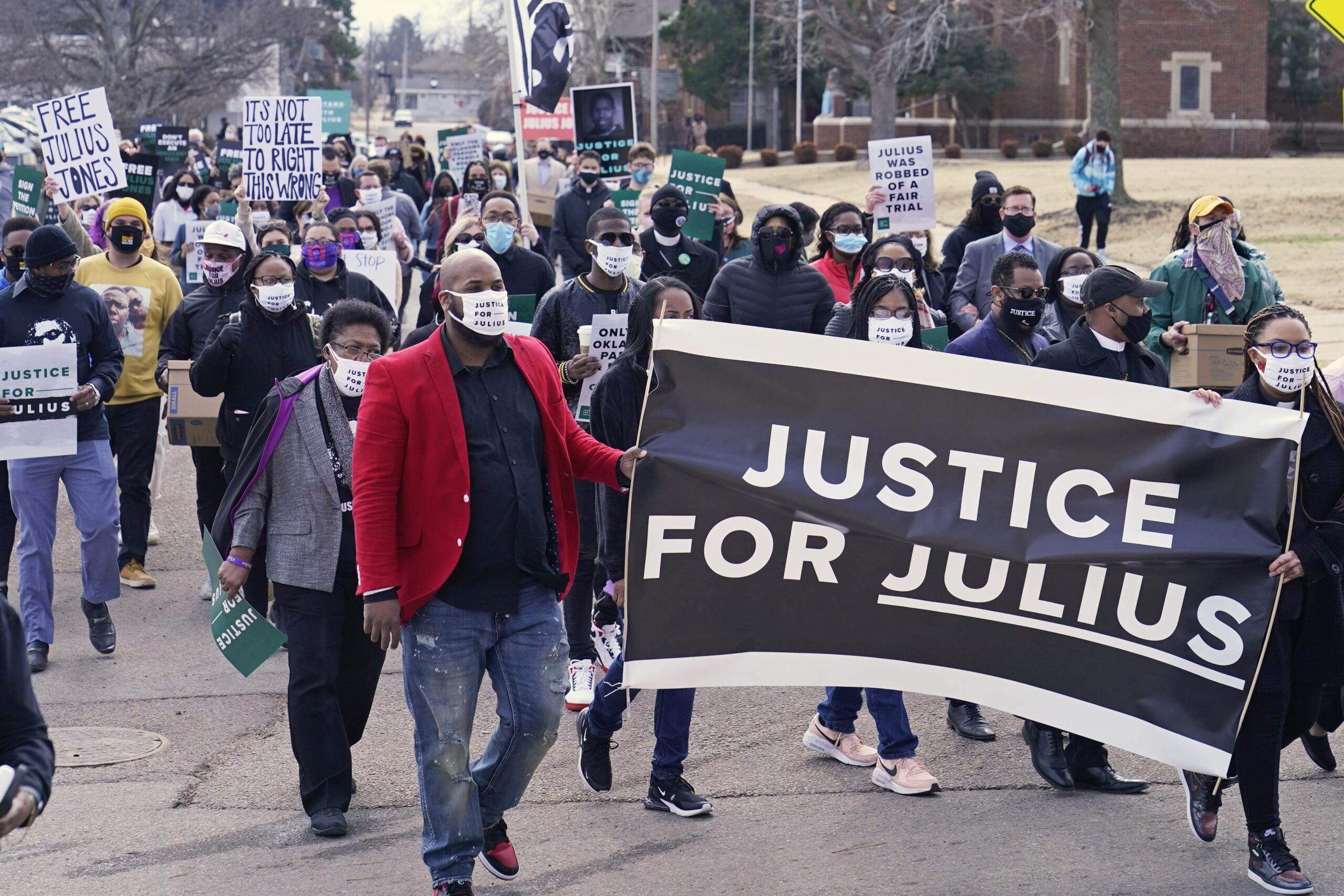 Supporters of Julius Jones, who has been on death row in Oklahoma since 1999, march to the offices of the Oklahoma Pardon and Parole Board, Thursday, Feb. 25, 2021, in Oklahoma City, where they presented a petition with over 6.2 million signatures, calling for Jones' death sentence to be commuted. (Image: AP Photo/Sue Ogrocki)

In 1994, Ron Williamson came within five days of being executed by the state of Oklahoma for a crime he did not commit. He was sentenced to death in 1987 for the rape and murder of a 21-year-old woman based largely on the unreliable testimony of a witness who, in a bizarre twist, was later revealed to be the actual perpetrator of the crime.

Even after it became clear that Mr. Williamson was wrongfully convicted, it took another five years before advances in DNA testing allowed Mr. Williamson — with the help of the Innocence Project — to prove his innocence.

In 1999, at the age of 19, Mr. Jones was convicted of murdering a white businessman, after a prosecution and trial marred by egregious failures by his defense counsel and police and prosecutorial misconduct. He was sentenced to death.

Little evidence pointed to Mr. Jones’ involvement in the murder. He did not fit the description provided to the police. And he had an alibi: At the time of the crime, Mr. Jones was at home with his parents, sister, and older brother. Still, prosecutors relentlessly pursued Mr. Jones despite these conflicting details and the absence of conclusive evidence.

Yet, there is little doubt that racism was at play in Mr. Jones’ case. When police arrested Mr. Jones, who is a Black man, he was subjected to a barrage of racial slurs from officers. In the crime’s immediate aftermath, the district attorney declared, with no evidence to support the claim, that the murder was an act of violence committed by Black men seeking money for drugs. One juror, in the mostly white jury, used the n-word and declared that Mr. Jones should be taken behind the courthouse and shot. Thus, although the presumption of innocence is the cornerstone of our system of justice, race operated as a proxy for criminality, guilt, and ultimately death-worthiness for Mr. Jones.

To make matters worse, Mr. Jones’ own attorneys failed to properly defend him. They not only neglected to present his alibi witnesses, they also failed to properly investigate the statements of the key witness, Mr. Jones’ co-defendant Christopher Jordan. Numerous people incarcerated with Mr. Jordan subsequently revealed that they heard him confess to being the attacker.

For more than 20 years, Mr. Jones has fought to prove his innocence and to save his own life.

Last month, the Oklahoma Pardon and Paroles Board held a commutation hearing and, for the first time in its long history, recommended commuting Mr. Jones’ death sentence to life with the possibility of parole. Although a commutation is a long way from an exoneration, this decision allowed Mr. Jones and his many supporters around the country to breathe a little easier.

And yet, just days later, a new execution date was set: November 18. Oklahoma Gov. Kevin Stitt made clear that only a clemency hearing would override the death sentence. That hearing has now taken place, and the board, by a vote of 3–1, again recommended clemency and, again, urged commutation of Mr. Jones’ death sentence to life with the possibility of parole.

“The Pardon and Parole Board has now twice voted in favor of commuting Julius Jones’s death sentence, acknowledging the grievous errors that led to his conviction and death sentence,” said Mr. Jones’ attorney Amanda Bass. “We hope that Governor Stitt will exercise his authority to accept the Board’s recommendation and ensure that Oklahoma does not execute an innocent man.”

Until the governor acts, Mr. Jones’ life hangs in the balance.

As Mr. Jones’ mother, Madeline Davis-Jones, so poignantly put it, “If the state of Oklahoma kills my son, it will not bring the Howell family closure and it will not bring Paul Howell justice. It will add a second tragedy — a second killing of a second innocent man — on top of the original, horrible tragedy of the murder of Paul Howell.”

Thurgood Marshall, America’s first Black Supreme Court Justice famously said, “America can do better, because America has no choice but to do better.” Mr. Jones’ case is now in the hands of Gov. Stitt, who must do better for Mr. Jones and for the integrity of our entire criminal legal system. He must stop the execution of Julius Jones.