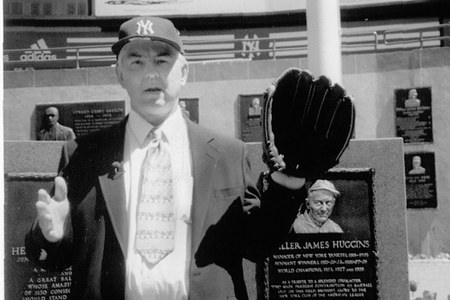 Ron Williamson grew up in Ada, Oklahoma, and was the youngest of three children and his parents’ only son. A talented baseball player, he was the 41st pick in baseball’s 1971 amateur draft. A shoulder injury ruined his career though, and Williamson returned home in the late 1970s.

In 1988, Williamson, along with Dennis Fritz, was convicted of the murder of Debra Sue Carter. Her body had been found six years earlier. Williamson was sent to death row and spent eleven years in prison before being exonerated.

In December 1982, twenty-one year old Carter was found sexually assaulted and murdered in her apartment in Pototoc County, Oklahoma. Fritz and Williamson were known to frequent the restaurant where the victim worked and allegedly the victim had complained to a friend that they “made her nervous.” Williamson had also been seen at the restaurant the night of the murder, according to a man named Glenn Gore.

Williamson and Fritz were not charged until five years after the murder (the charge was delayed by state exhumation of the victim after an incorrect analysis of fingerprints at the scene was noted). An inmate that Fritz was paired with eventually came forward and stated that Fritz had confessed to the murder. This confession came one day before the prosecution would have been forced to drop the charges against Fritz. Another informant testified that she had heard Williamson threaten to harm the informant’s mother as he had the victim. Additionally, police said that Williamson told them he had a dream about committing the crime. He allegedly told police that he dreamed that he stabbed and strangled the victim. This statement was treated as a confession.

Forensic testing was performed on various items of evidence. Seventeen hairs were recovered and were “matched” to both Fritz and Williamson, though we now know that this type of hair analysis is not a validated forensic science practice. Furthermore, the semen evidence found at the crime scene was subjected to blood testing, and the results suggested that the perpetrator(s) were non-secretors, and both Fritz and Williamson are non-secretors.

Williamson was sent to death row and Fritz was sentenced to life in prison.

After their convictions, Fritz and Williamson filed separate appeals. Upon the denial of his claim, Fritz contacted the Innocence Project and learned that Williamson’s lawyers were planning to test the physical evidence. The Innocence Project filed an injunction to make sure that the cases were joined with regard to DNA testing and were granted testing in 1998. The test results proved conclusively that neither Fritz nor Williamson was the source of the semen found and that none of the “matched” hairs belonged to them. Further testing of the evidence matched to Glenn Gore, the state’s main witness at trial.

Williamson and Fritz were released and exonerated in April 1999, after spending 11 years in prison for a crime they did not commit. Williamson had, at one point, come within five days of execution.

Soon after their release, Williamson and Fritz visited New York, where they took a tour of Yankee Stadium. Williamson said he “just got a taste of how much fun they were having up here.”

Williamson and Fritz filed a civil lawsuit against the Pontotoc County district attorney and others, which was settled for an undisclosed amount of money.

Sadly, on December 4, 2004, Williamson died in an Oklahoma nursing home, surrounded by his family. He had recently been diagnosed with cirrhosis of the liver. He was 51 years old.

Williamson and Fritz’s case is the subject for John Grisham’s first nonfiction book, The Innocent Man: Murder and Injustice in a Small Town, which was published in 2006 and was a bestseller.