Kevin Bailey released from prison in Illinois after he and Corey Batchelor were exonerated. Photo by Zoran Orlic.

Kevin Bailey was released after serving 28 years; Corey Batchelor served 15 years before being released in 2004

(Chicago, IL –January 30, 2018)  With the consent of the Office of the Special State’s Attorney for Cook County, a Cook County Court today dismissed the murder convictions of Kevin Bailey and Corey Batchelor based on DNA and other evidence that the two men, teenagers at the time, were physically coerced into falsely confessing. Bailey, who has served 28 years for the crime, was released  Tuesday afternoon. Batchelor was released in 2004 after serving 15 years in prison.

Donate: Give a gift to Kevin Bailey from his Amazon wishlist

“Four different projects have dedicated their blood, sweat, and tears for a decade in the hopes of rectifying the injustice perpetrated on two teenagers nearly 30 years ago,” said Josh Tepfer, an attorney with the Exoneration Project, which is representing Batchelor. “We are extraordinarily grateful to Special State’s Attorney Bob Milan and his staff for thoroughly reinvestigating these matters and recognizing that these convictions cannot be sustained.”

Innocence Project Senior Staff Attorney Bryce Benjet added, “As we’ve seen over and over again with these cases, sufficient force and coercion will force anyone to crack under pressure. But that doesn’t solve crimes. It destroys the lives of those like Mr. Bailey and Mr. Batchelor who are wrongly convicted and their families, further harms victims who are also denied justice and sacrifices everyone’s safety.” 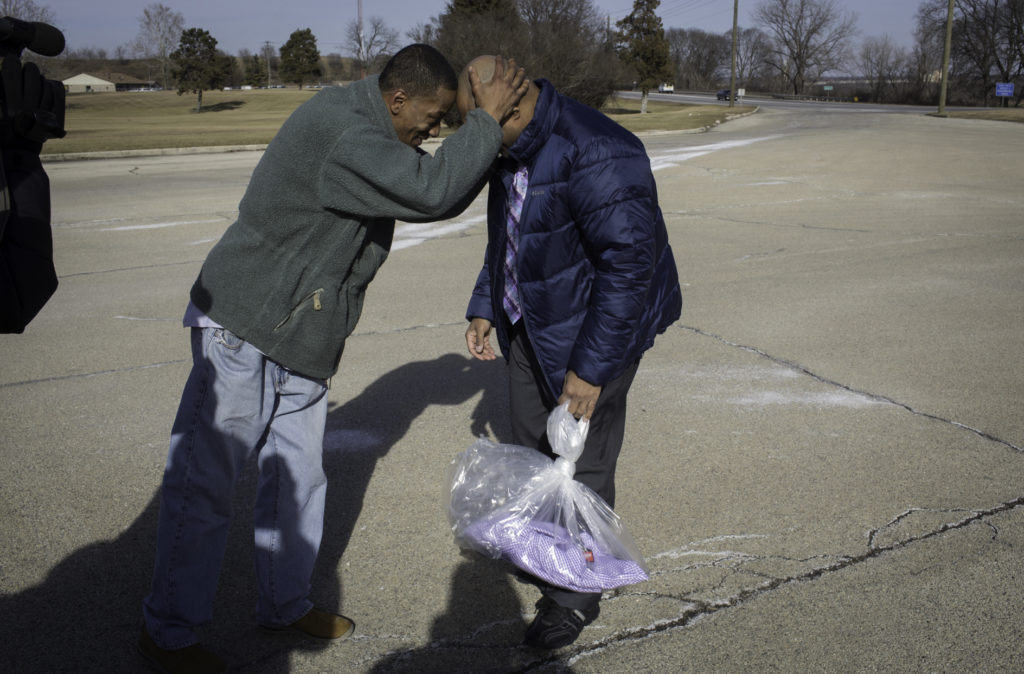 Kevin Bailey released from prison in Illinois after he and Corey Batchelor were exonerated. Photo by Zoran Orlic.

Bailey and Batchelor were convicted of the June 1, 1989 murder of Lula Mae Woods based exclusively on confessions obtained by an Area 2 Chicago Police detective who worked under the notorious former Chicago Police Commander Jon Burge. Woods was found by a neighbor, murdered in her garage. Police recovered a Domino’s Pizza cap under the victim’s body, which became the focus of the investigation. Police canvassed the neighborhood asking if anyone had any information about the murder. Batchelor was one of a number of neighborhood teenagers rounded up by police and subjected to questioning. Bailey was brought to Area 2 after Batchelor told police that he was with Bailey at the time of the murder. Bailey confirmed that Batchelor was with him that afternoon.

“Four different projects have dedicated their blood, sweat, and tears for a decade in the hopes of rectifying the injustice perpetrated on two teenagers nearly 30 years ago.” Josh Tepfer

Batchelor and Bailey were just 19 at the time they were brought in for questioning just five days after the murder. Batchelor was interrogated for more than 24 hours by police officers at the Area 2 headquarters where he was choked, kicked and slammed against the wall by detectives until he confessed. Bailey was questioned for more than 12 hours, and confessed only after a detective grabbed him by the neck and threatened him. The confessions given by the two scared teenagers were wildly inconsistent with each other and didn’t fit known details about the crime.

Bailey and Batchelor eventually sought post-conviction relief, with the Innocence Project and the People’s Law Office representing Bailey and The Exoneration Project and The Center on Wrongful Convictions of Youth representing Batchelor.  Despite early opposition by the prior Cook County State’s Attorney, attorneys secured DNA testing of the crime scene evidence.  Bailey and Batchelor were excluded as the source of all DNA detected.  Further, hairs with matching DNA profiles were recovered from (1) the Domino’s Pizza cap worn by the murderer and (2) a bloody towel found near the body. Bailey and Batchelor have been excluded as the source of these hairs.  The identity of the person who shed his hair on these key items is still unknown.

“This is yet one more example of detectives from the Chicago Police Department closing murder cases too quickly by coercing false confessions from black teenagers,” said Steven Drizin, one of Batchelor’s attorneys from Northwestern Pritzker School of Law’s Center on Wrongful Convictions of Youth.  “This further cements Chicago’s reputation as the ‘false confession capital’.”

Over 120 Black men and women were subjected to torture that was racially motivated and included electric shock, mock executions, suffocation and beatings by now convicted former Police Commander Jon Burge and his subordinates. Although Burge was terminated from the Chicago Police Department in 1993 and convicted for perjury and obstruction of justice stemming from the torture cases in federal court in 2010, scores of individuals continue to languish in prison as a result of confessions based in whole or in part on physically coerced confessions.

Bailey is represented by Bryce Benjet of the Innocence Project, which is affiliated with Cardozo School of Law, and Joey Mogul of the People’s Law Office.  Batchelor is represented by Exoneration Project attorney Josh Tepfer and Center on Wrongful Convictions of Youth attorney Steven Drizin.