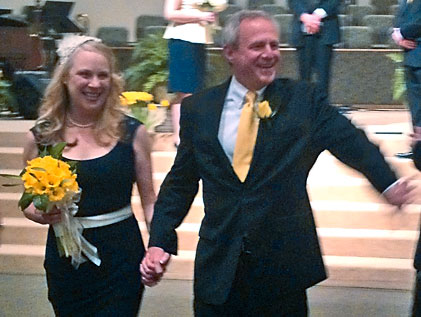 Texas exoneree and Innocence Project client Michael Morton was married on Saturday in Kilgore, Texas. Morton was released from prison in October 2011 after spending nearly 25 years in prison for the murder of his wife and moved to Kilgore to be near his parents. He met his new wife, Cynthia May Chessman, one night in January 2012 at First Baptist Church Liberty City, where he had been attending with his parents since his release.

A few days later, Chessman decided she would take Morton up on an offer he made to the congregation about going for coffee to talk more about his experience behind bars.


“I’d been locked up for a good while, and even in my previous life I’d never been asked out on a date,” he said. “Coffee dates are kind of a new phenomenon. I literally kind of scratched my head when she asked. I said, ‘Well, O.K.’ ”

“We have a very unusual relationship in that most people get to know each other slowly,” Mr. Morton said. “What’s your middle name, what’s your favorite color, all that kind of weird thing. And later on you talk about the dark stuff in your past. We started out the exact opposite. My life has been front-page news. Everybody knows everything about me. I don’t have any secrets. So that was our first-date sort of stuff, and then down the road a couple weeks later, it was like, what’s your middle name? It’s really kind of backward.”

A few days before the one-year anniversary of their first coffee date, Morton proposed. They were married Saturday at the same church where they met. In lieu of gifts, the couple asked invited guests to make donations to the Innocence Project.