The COVID-19 pandemic has devastated the Texas prison system and pushed Rodney Reed’s hearing back to 2021.

Screenshot from Dr. Phil's visit and interview with Rodney Reed at Allan B. Polunsky Unit in West Livingston, Texas.

Over a year ago on Nov. 15, 2019, the Texas Court of Criminal Appeals issued an indefinite stay of execution for Innocence Project client Rodney Reed, who was facing execution for the 1996 murder of Stacey Stites in Bastrop, Texas. The court ordered a new hearing in response to the mounting evidence of Mr. Reed’s actual innocence, evidence of Brady violations, and false testimony presented by the State at his trial.

The ruling gave Mr. Reed and his family hope, but the COVID-19 pandemic has since devastated Texas’ prison system and delayed Mr. Reed’s hearing until 2021.

10 facts you need to know about Rodney Reed’s case

10 facts you need to know about Rodney Reed’s case

Texas correctional facilities have the worst infection rate in the U.S. and at least 231 incarcerated people have died from the virus, and 80 percent of the people who died in the state’s county jail had not yet been convicted of a crime. The pandemic has also weighed heavily on Mr. Reed, who remains on death row in Allan B. Polunsky Unit and has been unable to receive legal or familial visits for months now.

“I spend most of my time alone, which is hard but also helpful in these circumstances,” Mr. Reed shared with his attorneys.

“But I am always wearing my mask. Access to the phones has been even more limited now than usual, and I have not been able to speak with my family in a long time. But whenever I go to the phone to have a legal call, my mask is up and I try not to touch anything.”

“I was able to hear a recording of the baby cooing, and that was very important for me.”

Mail is just about the only way Mr. Reed has been able to communicate with his family. His most treasured mail are photos of his grandchildren. And he’s looking out for the next mail delivery as his son Christopher recently welcomed a new baby and Mr. Reed is eagerly awaiting his photo.

“I was able to hear a recording of the baby cooing, and that was very important for me,” Mr. Reed said. 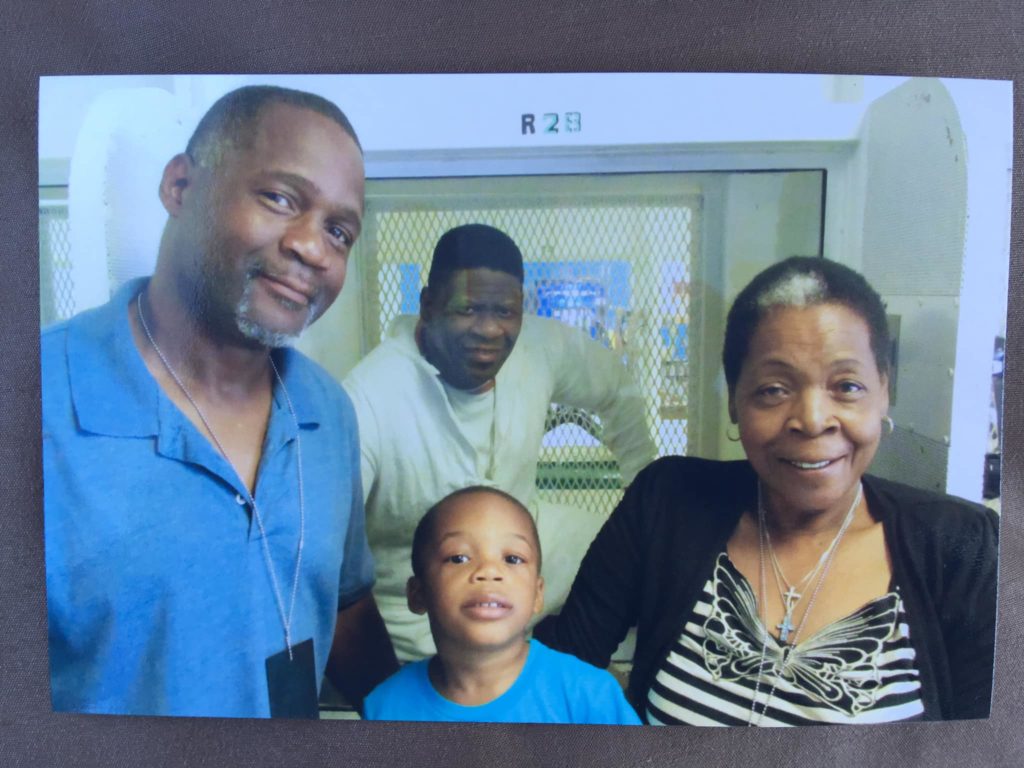 Rodney Reed with his brother Rodrick, nephew Rodrick Jr., and mother Sandra Reed at the Allan B. Polunsky Unit, West Livingston, Texas in 2019. Photo courtesy of the Reed Justice Initiative.

“I am always thinking about my family, about my mom, and about all of my supporters. I worry about everyone out there, with this pandemic going on,” he added.

His brother Rodrick, sister-in-law Wana Akpan, and mother Sandra in particular have played an important role in leading grassroots efforts calling for justice for Mr. Reed and an end to the death penalty.

Last year, in the weeks before his scheduled execution on Nov. 20, 2019, Mr. Reed’s case, fueled by racial bias, garnered global support and media attention. Millions of people signed a Change.org petition against his execution. Kim Kardashian, Rihanna, Beyoncé, and Oprah publicly dissented, and 26 Texas bi-partisan lawmakers sent letters of opposition to Texas Governor Greg Abbott. Thousands of Texans also called the governor and the Texas Board of Pardons and Paroles, urging them to stop the execution until Mr. Reed had a chance to present his innocence claims in court. Together with the actions of his legal team, they succeeded.

“We eagerly await the opportunity to fully present Mr. Reed’s case in court.”

“We eagerly await the opportunity to fully present Mr. Reed’s case in court. That day has been delayed because of the pandemic, but it will come and the court will finally see the full picture of his innocence,” said Jane Pucher, an Innocence Project attorney.

As Mr. Reed and his legal team await justice, he urges supporters to “keep getting the word out about my case — talk to your friends, put things up on social media.”