Despite the life-long impact of Mr. Harrell’s wrongful conviction, he always broke through the pain with a smile. 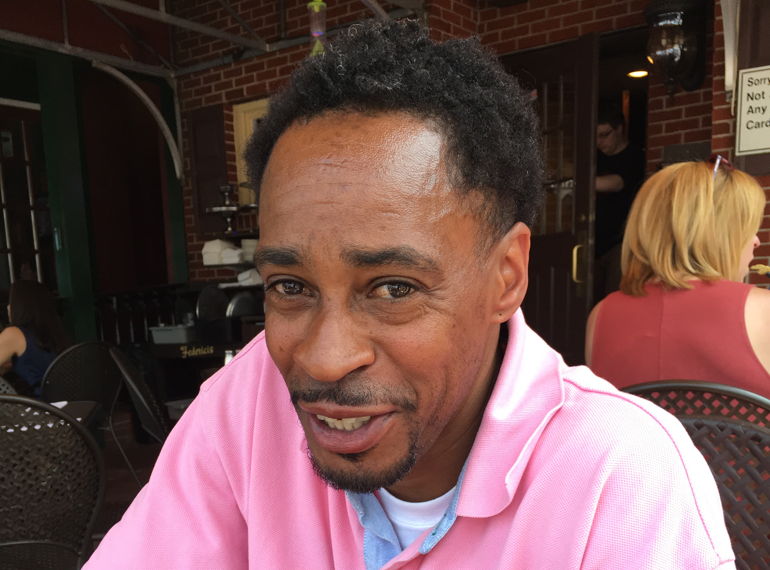 We are saddened to share that our client Dion Harrell, 53, passed away unexpectedly on Jan. 15, in Long Branch, New Jersey. Mr. Harrell was a proud father of two daughters and grandfather to three grandchildren whom he adored. Mr. Harrell was wrongly incarcerated for four years and spent nearly two decades on the sex offender registry for a crime he did not commit.

But despite this grave injustice, “He was a fun loving guy, kind, respectful. He was a fighter, he never gave up,” his cousin Bryan Brodie said.

“He would give you the shirt off his back.”

“He would give you the shirt off his back.”

Mr. Harrell loved the freedom of bicycling, fishing, and playing basketball. The Innocence Project took on his case in 2013, and he was exonerated in 2016. Even after his exoneration, Mr. Harrell often called or visited the Innocence Project office just to check-in and say hello. At our annual Network Conference, which often buzzes with hundreds of people, Mr. Harrell had a gentle and comforting presence that set everyone at ease, and reminded staff and fellow exonerees that they had a friend in him.

Mr. Harrell was only 22 when he was accused of a 1988 rape. He was wrongly convicted four years later, even though he had been playing basketball with his friends, including a police detective, at the time of the crime. When the Innocence Project took on his case, New Jersey’s DNA access law only applied to people still in prison. The District Attorney’s Office initially informed the Innocence Project that the evidence no longer existed. Once it was found the district attorney opposed testing because Mr. Harrell was already out of prison. Mr. Harrell’s case was ultimately a catalyst for New Jersey to change its DNA access law.

After his release in 1996, Mr. Harrell was forced to remain on the sex offender registry in New Jersey, restricting his opportunity to earn a living and rebuild his life with his family. His visits with his own daughters required supervision.

“I’ve tried to be the best dad that I could be, but because of the wrongful conviction, I’ve been in and out of their lives,” he said in 2016. Eventually, he was able to build a strong relationship with his eldest daughter and enjoyed spending time with her son Jayden.

Despite the hardships and the life-long impact of Mr. Harrell’s wrongful conviction, he always broke through the pain with a smile.

“I went through a whole lot, but I kept my head up through it all,” Mr. Harrell told the Innocence Project in 2016.

The criminal legal system stole years of his freedom and then continued to overpower his life for decades, forcing him to fight an uphill battle to meet even the simplest human needs such as housing or seeing family. For most of his life, the State of New Jersey refused to compensate Mr. Harrell for the time he spent on the sex offender registry. For two years after his exoneration, Mr. Harrell attended hearings and press conferences, telling his story, to help improve the law not only for himself but for other wrongly convicted people as well, so that they could be fairly compensated. Mr. Harrell simply never gave up.

“When you know you’re right, keep going for it,” he said the day he was exonerated. “Maintain your innocence, you gotta fight — fight!”

Mr. Harrell is survived by his two daughters, three grandchildren, five brothers, and one sister. He will forever be remembered by his cousin Bryan Brodie, a host of relatives, his four best friends, and the staff at the Innocence Project.

In honor of Mr. Harrell’s memory, our staff shared these reflections on the powerful impact he had on their lives and work:

“To me, Dion was a portrait of quiet resilience. He experienced an undue amount of pain and injustice in his life, and yet, despite it all, he was a kind and gentle person. It was always a pleasure to see him when he would come by the office. When he visited, I knew I’d be greeted with an embrace and a gracious, ‘How are you doing, young lady?’ And then we would swap stories about our families.

Dion was an important member of the Innocence Project community. He’s gone too soon. I will miss him dearly.”

“Dion was such an incredibly kind, gentle soul who persevered to prove his innocence and to fight alongside our policy department to change the system. His story highlighted the collateral consequences that continue to damage people’s lives even after their release from prison.

I know all of us who got the chance to know Dion loved and adored him and appreciated him immensely — this is devastating.”

“Dion’s was my first exoneration — a month after I started working at the Innocence Project. It was such a pleasure to get to know him, his story, and his struggles. His eyes showed his pain, but his face lit up when talking about his bike. His life was a blessing and his memory will be a treasure. He will be sorely missed.”

“Dion was energetic and caring — he would often just call to check on me and tell me about his life. We always had fun on our advocacy trips to Trenton together. He was a good friend and gentle soul. I will miss him.”

“Dion embodied what a warmhearted soul looked like. I will miss our conversations. Whenever we spoke, he always had a way of making me laugh one moment with his quiet sense of humor and then being uplifting the next no matter what was going on. I would walk away inspired because of it. Rest easy, Dion. I honor your strength and will miss you dearly.”

“Dion was an incredibly gentle person who endured an unimaginable injustice. He spent much of his life in the most trying of circumstances because of this wrongful conviction. Yet, this never deterred him from reaching out, from showing kindness to others. He would call me at the office and talk with me. At first, I thought it was a mistake and he meant to call someone else, but then it became routine and he would ask how I was doing and tell me how things were with him. I realized he just wanted to connect. I so appreciate him for reminding me how important that simple thing is as a human being, especially right now. I hope he knew that we all cared deeply for him, and wanted him to have the compensation and all of the happiness he deserved.”

“I’m absolutely gutted to hear this news. I’ll never forget meeting Dion for the first time at the Network Conference in Memphis. We went out to dinner after the closing event at the National Civil Rights Museum. We talked about what an amazing gathering the conference is but how it can also feel overwhelming with so many people and so much going on. He was moved by the experience of visiting the museum and we talked about how profound it was to see the room where Dr. King stayed and where he was killed. He was such a sweet, generous, and empathetic soul.”

“Dion would always shout me out when I saw him in the office, and I was always happy to stop and listen to whatever triumphs or struggles in his life he wanted to share. I will always remember my last time seeing him in the office. He had grown out his hair and now it matched his smile. We dapped up and hugged, a simple gesture that is truly precious and priceless now. I can’t remember the conversation exactly, but I’ll always remember that embrace. Rest easy, Dion.”

Do you have a favorite memory of Dion? Let us know in the comments below.