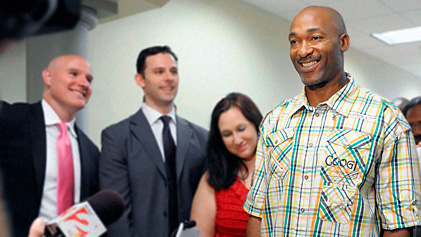 An Oklahoma man who served 16 years for a 1995 burglary and robbery he did not commit was exonerated today by DNA testing.

With the consent of the Tulsa District Attorney’s Office, District Court Judge William C. Kellough overturned Sedrick Courtney’s conviction after DNA testing excluded him as the source of hairs that were recovered from ski masks worn by the two perpetrators who committed the crime.

After Courtney’s lawyers were repeatedly told by the Tulsa Police Department that the crime scene evidence was destroyed, the Innocence Project was finally able to locate the evidence in 2011 and conducted testing that definitively excludes Courtney as the source of the hairs found on the ski masks.

Barry Scheck, Co-director of the Innocence Project and a member of Courtney’s legal team said:


“We are grateful for District Attorney Tim Harris’ help in quickly bringing an end to the terrible injustice faced by Mr. Courtney,” said Scheck. “Mr. Courtney was able to get the DNA testing that has cleared his name. Undoubtedly there are many others who have not been so fortunate because Oklahoma has the unfortunate distinction of being the only state in the nation that doesn’t have a DNA testing law. Hopefully this horrible miscarriage of justice will spur state lawmakers to do the right thing and make it easier for those who have been wrongly convicted to get access to the DNA testing that can clear their names.”

Courtney was paroled in 2011 and joined in court today by family members and other exonerees who have been cleared by DNA testing.

Send a message of congratulations to