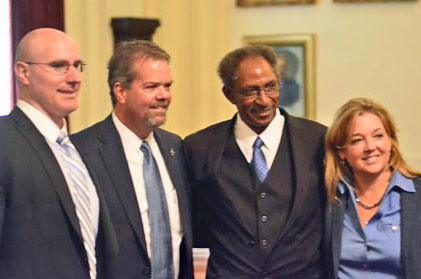 Photo: Willie Grimes with his attorneys at the North Carolina Center on Actual Innocence


After serving more than 24 years behind bars for a rape he did not commit, Willie Grimes was officially declared innocent Friday by a three-judge panel. Willie Grimes was convicted of the 1987 rape and kidnapping of a 69-year-old Hickory woman and sentenced to life in prison. He was released on parole in May.


When asked about the State’s position on the case, Gaither said, “My office is about seeking the truth, and we never play ‘hide the ball’ for anybody or any reason. In this week’s presentation of evidence we counted no less than 35 pieces of evidence and testimony in support of innocence for Willie Grimes. The fact that the three-judge panel was so emphatic in its conclusion and decision only strengthens the confidence I have in our decision.”

The primary evidence used against Grimes at trial was the victim’s cross-racial identification and hair microscopy. The defense presented six alibi witnesses who testified that Grimes was with them on the night of the sexual assault and could not have committed the crime.

Numerous attempts were made over the years to locate and test the biological evidence that was used to convict Grimes. But all of the evidence was presumed destroyed or lost until the North Carolina Innocence Inquiry Commission compelled the Hickory Police Department to locate all files. As a result, a latent fingerprint card containing two fingerprints was recovered from a banana in the victim’s kitchen. According to the victim, after the assailant assaulted her, he went into her kitchen, and grabbed some fruit (including bananas) before fleeing out the back door. A crime scene technician lifted two fingerprints from the bananas left behind. The fingerprints did not match Grimes, but the State withheld this evidence until the trial. At sentencing, Grimes’ defense attorney requested, unsuccessfully, to have the two fingerprints sent to the FBI for comparison purposes.

In October 2011, the fingerprints were finally uploaded into the Automated Fingerprint Identification System where there was a hit on the original suspect in the case. Soon after, the eight-member Innocence Inquiry Commission unanimously agreed there was sufficient evidence of factual innocence to warrant judicial review before a three-judge panel.

Grimes was represented by the North Carolina Center on Actual Innocence.