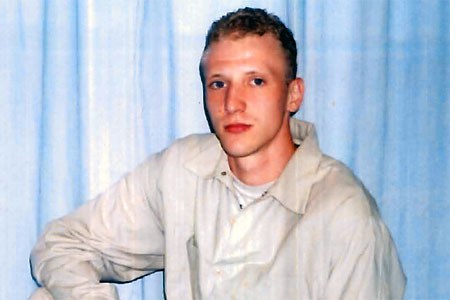 to formally withdraw his 2002 guilty plea for a 2001 rape and robbery he has always maintained he did not commit.  With the consent of the Harrison County Prosecuting Attorney, Judge Bedell then ordered Mr. Buffey released to home confinement while the lawyers work to resolve the case.

Following the state’s standard release procedures, Buffey was returned to the North Central Regional Jail for processing and a final evaluation of the terms and conditions of release. Assuming the home confinement plan is approved, he will be released shortly thereafter. He will be reunited with his family for the first time since his 2002 conviction for a rape and robbery in which DNA evidence has now inculpated another assailant. That assailant, Adam Bowers, was convicted of the crime after Buffey successfully petitioned the court for a post-conviction DNA test. The new testing led to a DNA database “hit” to Bowers, a Clarksburg resident serving time in state prison for another felony.  Bowers was convicted of the rape and robbery in 2015 and was sentenced to 30 to 70 years.

“We are thrilled that Mr. Buffey will have the opportunity to be reunited with his family while we work with the Prosecuting Attorney to reach a final and fair resolution in this case,” said Nina Morrison, Senior Staff Attorney with the Innocence Project, which is affiliated with Cardozo School of Law.

counsel from Morgantown, West Virginia, added, “This day has been a long time coming for Mr. Buffey, but he is grateful to finally be reunited with his family and eager to start to put this painful chapter of his life behind him.”  Karlin appeared at the hearing along with

Buffey’s release follows a decision from the West Virginia Supreme Court of Appeals last November finding that Buffey’s constitutional rights had been violated when the prosecution failed to turn over the results of DNA tests excluding Buffey in the single perpetrator rape of an elderly woman. The Court found that the state was in possession of the DNA tests results for six weeks before the final hearing, yet didn’t disclose this information to his lawyer, despite repeated requests from the defense.

Because of the ruling, Buffey was allowed to withdraw his guilty plea in court today. Lawyers are working with the District Attorney to reach a resolution in the case. In exchange for his plea, the prosecution dismissed three unrelated burglary charges against Buffey also brought against him in 2002, which involved nonviolent break-ins of local businesses.

At his request, the Innocence Project took on Buffey’s case in 2008. The Innocence Project and the law firm of Allan Karlin and Associates secured a court order for DNA testing and learned in May 2011 that Buffey was excluded as the source of all of the sperm recovered from the victim’s rape kit and bedding.  The Innocence Project was allowed to enter the profile into the federal DNA database in 2013, which identified Bowers as the real assailant.

In a lengthy appeal that followed the new DNA testing, Buffey’s lawyers also presented evidence that the state crime lab possessed an earlier round of exculpatory DNA testing in 2002, but did not disclose it to the defense before the final plea hearing. The Prosecuting Attorney argued that Buffey should still be held to the terms of his “voluntary” guilty plea, but the Supreme Court of Appeals unanimously rejected the state’s argument in November, finding that Buffey’s plea and sentence violated fundamental principles of due process. In January, the Attorney General of West Virginia announced that the state would not seek further review by the U.S. Supreme Court and would let the ruling in Buffey’s favor stand.

The Court of Appeals’ precedent-setting ruling could profoundly impact how guilty pleas are obtained and prevent innocent people from pleading guilty to crimes they did not commit due to fear that they might otherwise face a much more severe sentence. Nearly 10 percent of the nation’s 337 wrongful convictions proven by DNA evidence involved innocent people who pled guilty, whether due to coercive plea-bargaining, excessive sentencing schemes, ineffective lawyers or false confessions, or a combination of these factors.

In addition to Morrison and Karlin, Buffey is represented by Barry Scheck, Co-Director of the Innocence Project, and Michael B. Hissam and Benjamin L. Bailey of Bailey & Glasser LLP in Charleston, WV.