After Being Shot by Police, This Exoneree and Poet Is Using His Art and Experience to Curb Gun Violence

After meeting hundreds of teens impacted by gun violence in prison, Termaine Hicks set out to make change. 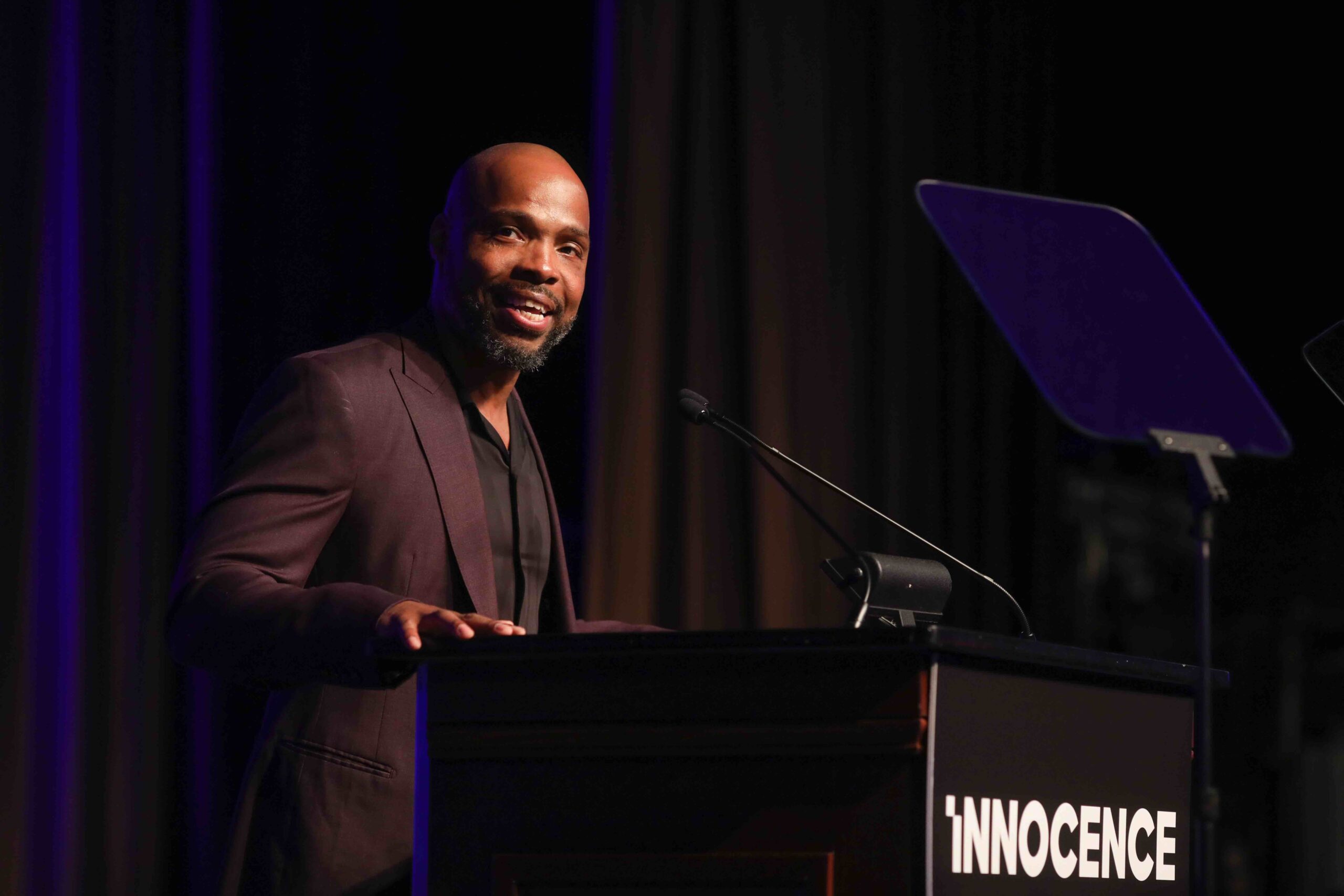 Editor’s note: This story contains difficult descriptions of gun violence and its impact, and mentions suicide. If you or someone you love have been impacted by gun violence and you would like support, you can find resources at everytownsupportfund.org. If you want to speak to someone or are experiencing suicidal thoughts, call the free and confidential National Suicide Prevention Lifeline (1-800-273-8255) or text the Crisis Text Line (741-741).

President Joe Biden addressed the nation on Thursday, imploring lawmakers to take action against gun violence after several recent, tragic mass shootings, including in schools, supermarkets, and hospitals. With gun violence on the rise across the country, its devastating consequences and the urgent need for change are once again in the spotlight. Exoneree Termaine Hicks understands the long-lasting, community impact of gun violence all too well.

“Being shot is traumatizing in and of itself — just the violence of getting shot — even when you are fortunate or blessed enough to survive and try to build your life back from that,” Mr. Hicks, who is a survivor of a shooting himself, said.

In 2001, police responding to a 911 call mistook him for the attacker of the woman he had been trying to help and shot him three times in the back. They then conspired to cover up their mistake, and he was wrongly convicted of sexual assault. As a shooting survivor, a parent, and a grandparent, Mr. Hicks said he cannot fathom the pain of family members who have lost loved ones to gun violence.

Gun violence among youth, in particular, is what Mr. Hicks aims to prevent through community-level interventions and programs. 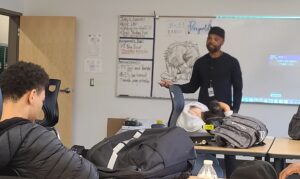 After 19 years of wrongful incarceration in Pennsylvania, Mr. Hicks was freed and exonerated in December 2020, and quickly set to work building S.T.E.P.U.P., an organization he dreamed up during his wrongful imprisonment to curb gun violence among youth. S.T.E.P.U.P. —  an acronym for “selfless thinking expresses potential that uplifts people” — teaches children conflict resolution and critical thinking skills to empower them to speak out against bullying, illegal weapons possession, and other behaviors that can lead to gun violence.

Mr. Hick was inspired to start the organization by the hundreds of teenagers convicted of gun-related charges whom he met during his years of wrongful incarceration.

“Watching the younger generation come through the penitentiary and really sitting down talking with these kids … I just wanted to do something to hopefully prevent more of these young men, most of them Black and brown, from going to jail because of a fight,” he said. “Once they’re in, they realize that the fight they were in, where they went and got a gun and killed a guy, really wasn’t worth it because now this is the rest of their lives.”

Firearms are now the leading cause of death for children and teens in the U.S., according to Everytown for Gun Safety, with Black children and teens being 14 times more likely than their white peers to be victims of gun homicide. Just this year alone, there have been at least 77 incidents of gunfire on school grounds.

During his wrongful incarceration, Mr. Hicks turned to writing as an outlet to engage his creativity and process his experiences, frequently writing plays and poetry. A key part of S.T.E.P.U.P.’s approach is engaging students in the production of and dialogue around short educational films, many of which are based on scripts that Mr. Hicks wrote while incarcerated with the goal of producing them when he was finally proven innocent and exonerated. 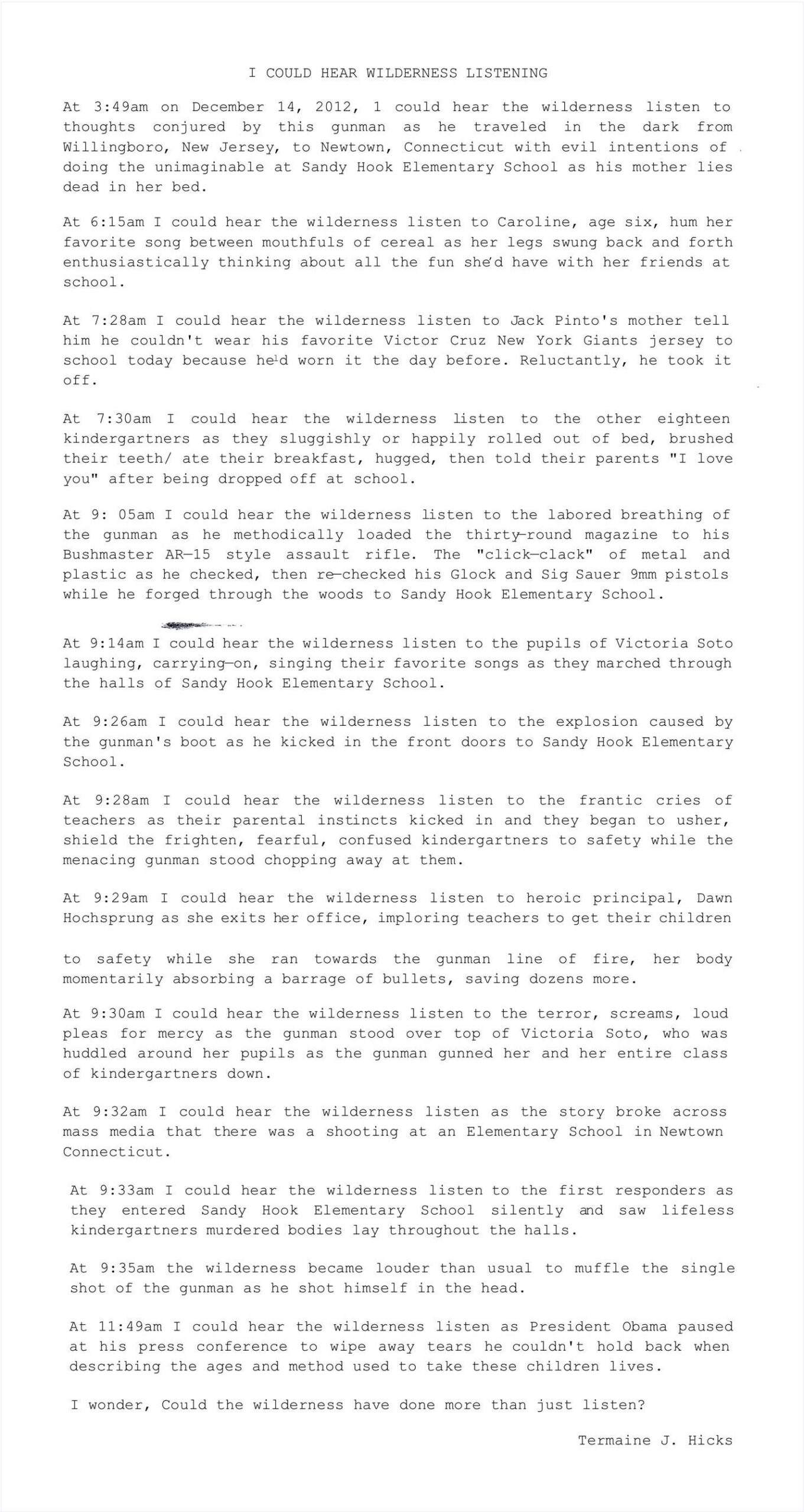 Termaine Hicks wrote this poem in 2012 while still incarcerated as a tribute to the victims of the Sandy Hook school shooting. (Image: Courtesy of Termaine Hicks)

Although he wrote many of the scripts a decade ago, with a few updates to the dialogue to match today’s slang, he has been able to revive them for S.T.E.P.U.P.’s curriculum. His program, presented at schools from Philadelphia to Portland, has been hugely well received by students, teachers, and parents.

“We’re trying to cultivate a new culture for these kids to know and understand that it’s alright to step up and say something [when you see signs of conflict escalating] because it could help prevent something tragic from happening,” Mr. Hicks said.

If you’d like to support S.T.E.P.U.P. and Mr. Hicks’ work, check out his fundraiser here. If you’d like to learn more about how you can take action to prevent gun violence, you can find more resources and information here.