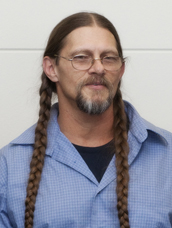 As Innocence Project client Robert Dewey approaches the one-year anniversary of his DNA exoneration last April, he has still not been compensated and struggles financially. Colorado, where Dewey lives, is one of 23 states that lacks a compensation statute, though the recent passage of a compensation bill though the state’s house judiciary committee has given him hope that he will eventually receive restitution. Without it, Dewey may live in poverty for the rest of his life. He is 52 years old, suffers from a back injury that was aggravated by his stay in prison, and lacks job skills or experience from 18 years behind bars for a murder he didn’t commit.

featured Dewey for an article exploring what the wrongfully convicted are entitled to receive for their lost years in prison.

“We have a responsibility to make this injustice a justice,” said Representative Angela Williams, a Democrat from Denver who is championing the measure. “You lose everything. You’re starting from scratch. How do you save money? How do you invest?”

A spokesman for Colorado’s governor, John W. Hickenlooper, said he had not decided whether to support the bill. But Mr. Dewey, now jobless, is betting everything on its passage.

The Innocence Project has provided some assistance through our social work team and the Exoneree Fund, which provides immediate financial assistance for critical needs like housing, transportation and clothing.
Donate to the

recent blog about this issue

compensation for the wrongfully convicted