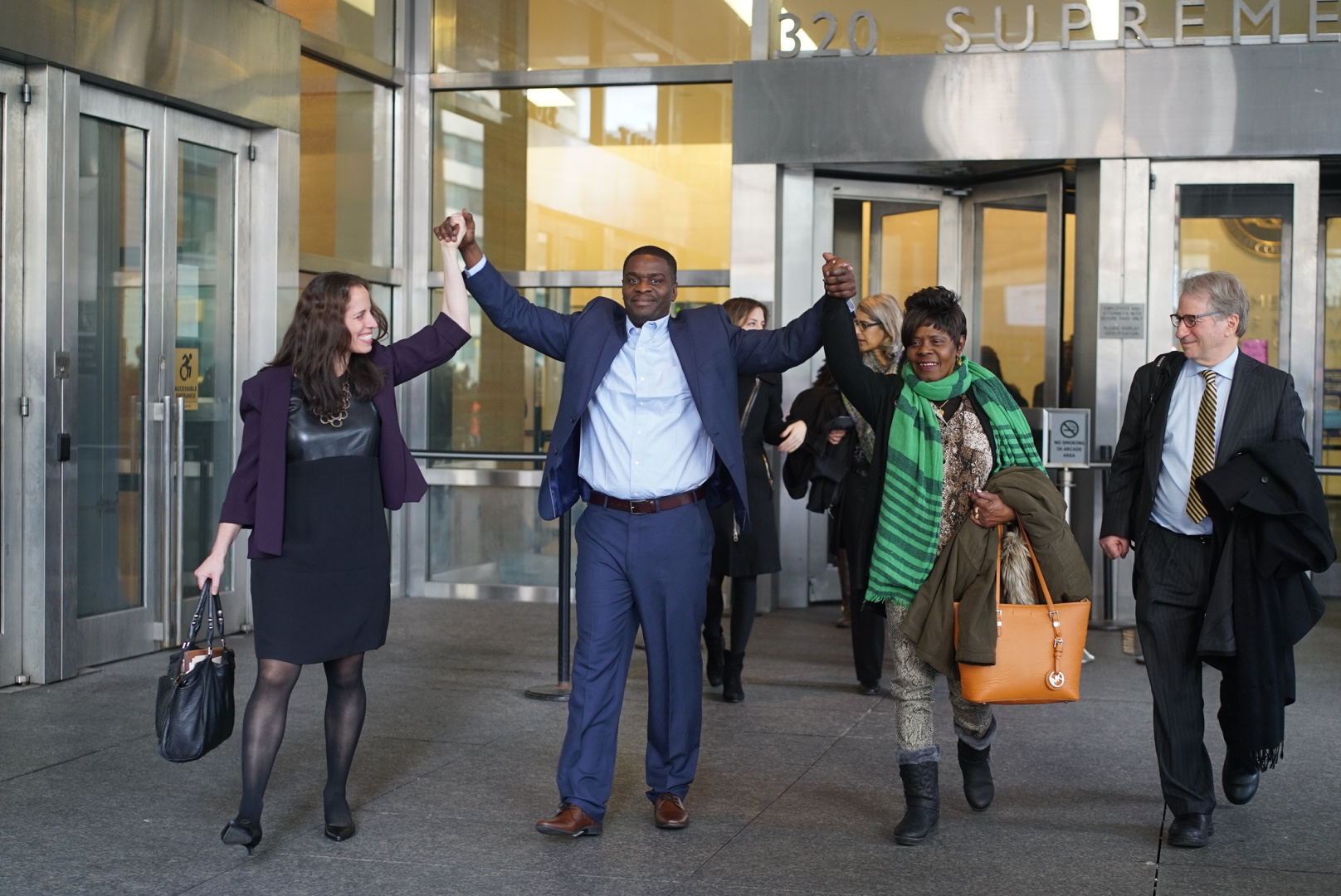 (New York – December 20, 2017) Today, Mark Denny, who was just 17 when he was arrested, walked out of a Brooklyn courtroom a free man at the age of 46, after serving nearly 30 years for a rape and robbery that prosecutors now agree he didn’t commit.

Donate: Give a Personal Gift to Mark Denny as He Starts His New Life

After unsuccessful attempts to locate evidence that could be submitted for DNA testing, the Innocence Project brought the case to the attention of the Kings County (Brooklyn) District Attorney’s Conviction Review Unit which thoroughly reinvestigated a 1987 Brooklyn robbery and rape in which four young men were charged with raping and robbing two store clerks at a Burger King after hours. After concluding that that the three other men charged were the sole perpetrators of the crime, but that Denny had no involvement, the Kings County District Attorney’s Office moved to vacate and dismiss Denny’s conviction and joined the Innocence Project in asking to have Denny freed from prison.

“Mr. Denny has been waiting for this day for a very long time.” Nina Morrison

In addition to his Kings County rape-robbery case, Denny was also convicted of two other crimes in other New York counties – all of which have now been dismissed. Six days after his 1989 Brooklyn conviction, Denny reluctantly took a plea to a one-year sentence for possession of a weapon in Manhattan (New York County), after police found a gun in a car in which he was a passenger, despite maintaining his innocence. The following year, in Chemung County (Elmira), Denny was charged with unlawfully possessing a razor blade as a prison inmate, and he pled not guilty and went to trial. But after learning of the Brooklyn DA’s innocence findings, New York County District Attorney Cy Vance and Chemung County DA Weeden Wetmore agreed to dismiss those cases as well. Their actions mean that Denny leaves prison with no convictions on his record, as was the case when he was first wrongly arrested at age 17.

“Mr. Denny has been waiting for this day for a very long time,” said Nina Morrison, senior staff attorney for the Innocence Project, which is affiliated with Cardozo School of Law. “We owe a tremendous debt of gratitude to District Attorney Eric Gonzalez and members of his conviction review unit for recognizing Mr. Denny’s innocence and taking extraordinary steps to right the wrongs that kept Mr. Denny incarcerated for his entire adult life. Their work is a model for law enforcement around the nation, as more prosecutors’ offices are taking the initiative to identify and correct wrongful convictions.” 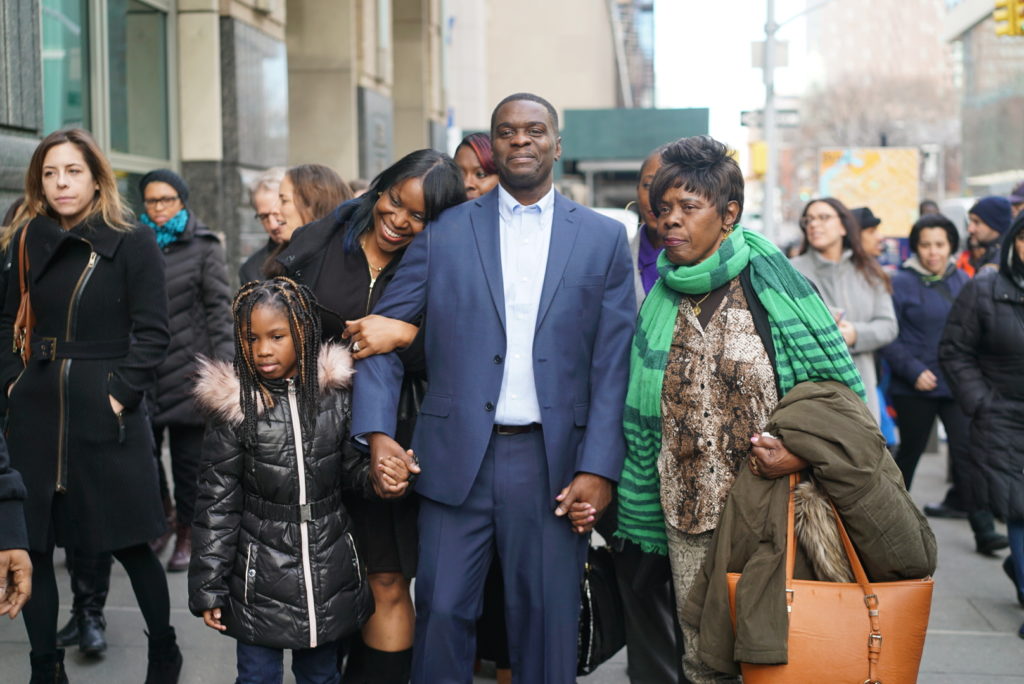 Mark Denny surrounded by his  family moments after his exoneration on Dec. 20. Photo by Sameer Abdel-Khalek.

“District Attorney Gonzalez has set the gold standard for reinvestigating past cases,” added Innocence Project Co-Director Barry Scheck. “The conviction review unit has demonstrated an unprecedented willingness to look at flawed convictions, even where DNA evidence is unavailable. The unit understood the dangers of multiple identification procedures and, after obtaining the advice of an expert on memory and identification, recognized that the identification in this case was unreliable. We are grateful that they were persuaded that Mr. Denny is innocent and went above and beyond the call to correct the injustice.”

Denny became a suspect in the December 1987 burglary of a Burger King on Fort Hamilton Parkway and rape of an employee after being arrested in a car driven by his cousin Raphael James, who committed a series of burglaries of Burger Kings in the city with two friends of James’, Mark Smith and Eddie Viera. Smith and Viera eventually took plea deals to resolve the charges against them in both Brooklyn and Manhattan. Since his conviction, James, who was tried and convicted with Denny, has admitted that Denny had no involvement in the crimes. The Kings County Conviction Review Unit recently obtained statements from both Smith and Viera, who also confirmed that only three men committed these crimes, and that Denny was not involved or present.

The rape-robbery occurred at about 2:00 AM as the last two workers were closing up the restaurant. Two men wearing ski masks approached the employees as they were locking up and forced them to reopen the restaurant. Once inside the male employee was forced to stay in the stock room while the female employee was raped by the two men. At some point during the crime, the men were joined by at least one other male.

Denny, who has always maintained his innocence of the crime, was tried with James. There was no physical evidence connecting Denny to the crime. The only admissible evidence against him was the identification by the female victim — one that the District Attorney’s Office has concluded was severely tainted by flawed police identification procedures. The Kings County District Attorney’s Office also found persuasive the fact that the victim consistently stated that only three men were involved until after Denny’s arrest, at which time she allowed for the possibility of a fourth perpetrator. The second store clerk/victim always maintained that there were only three perpetrators, and did not identify Denny.

In March 1988, detectives showed the female victim a photo array that included Denny’s photograph and she did not select his photograph. The next day, the detective placed Denny in a live lineup and he was selected by the female victim, but not the male victim. This case presents a textbook example of what is known as “commitment effect,” where a witness’s pure memory of the perpetrator’s identity is contaminated by prior exposure to the same suspect in a different identification procedure. Here, the female victim, who was previously exposed to Mr. Denny in a photo array, selected him in a subsequent identification procedure. Alternatively, the male victim, who was not previously exposed to Mr. Denny in a photo array, did not identify him.

Support: Mark Denny as he transition home after 30 years

Contrary to decades of scientific research on memory and identification, at trial the victim maintained that her “memory became better” after the crime.

From the time of his arrest, Denny has consistently maintained his innocence. At trial, he presented the testimony of his grandmother, who testified that they were at Denny’s mother’s house in Queens the entire night. Despite this alibi, Denny was convicted and was sentenced to decades in prison, despite the fact that he had no prior convictions of any kind. Over the last decade, he was denied parole several times because he would not “admit” guilt to crimes he did not commit.

Six years after he was sentenced, James, who was also convicted, wrote to the court and to the district attorney’s office. In his letter, he acknowledged his participation in the crime and said that Denny was innocent. He said, “My conscience has been haunting me for years” because his own role in the offense had led to his young cousin’s wrongful conviction. Although the New York courts refused to reverse Denny’s conviction based on James’ admission, the Brooklyn District Attorney’s Office, after a thorough review of the evidence —including admissions of guilt, which cleared Denny, from James and the other two perpetrators — now agrees that Denny was not involved in the crime.

Denny was released from a Brooklyn courtroom today, surrounded by many friends and family, including his mother, Elaine Denny, who still lives in Brooklyn and never lost faith that her son would one day be exonerated.

Denny has been represented since 2009 by the Innocence Project, which is affiliated with the Cardozo School of Law. Cardozo Law School’s Immigration Justice Clinic also represents Denny, who came to the United States from Guyana as a lawful permanent resident as a child. While in prison, Denny was ordered deported on the basis of one of the above convictions and, therefore, even though all of his convictions were vacated, faced immediate deportation upon his release from criminal custody. The Immigration Justice Clinic is working to reopen his removal proceedings and prevent his removal while his request to reopen his case is pending. Last week, Immigration and Customs Enforcement informed Denny’s lawyers that in light of the fact that all of his criminal convictions have been overturned, ICE will not oppose his request to reopen his removal proceedings so that he can seek full citizenship and remain in the United States with his family, and does not intend to detain or deport him while the federal government is considering his request to restore his status as a lawful permanent resident. 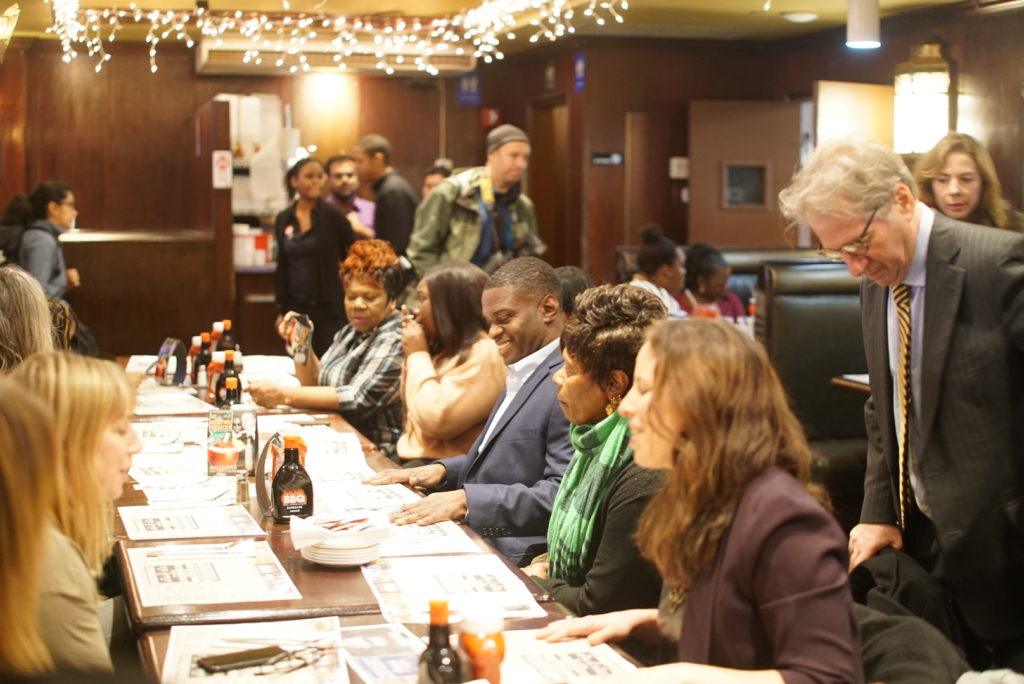 Mark Denny enjoys his first meal at Dallas BBQ with his legal team and family. Dec. 20. Photo by Sameer Abdel-Khalek.