This is just the first step in correcting the record of this pivotal moment in history.

Muhammad A. Aziz has spent the last five decades branded as the murderer of a legendary civil rights icon: Malcolm X. But he had nothing to do with the crime. 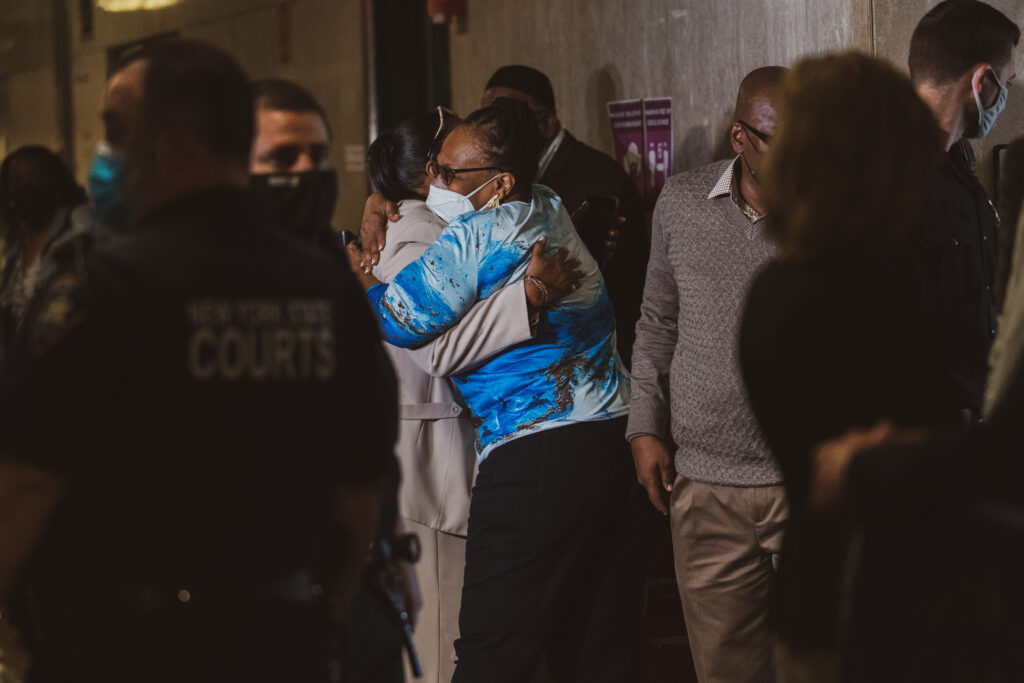 Muhamad Aziz’s family members hug at the court before his exoneration hearing.(Image: Jeenah Moon for the Innocence Project)

Last week, the same district attorney’s office that brought the charges against Mr. Aziz 56 years ago declared that his conviction should be thrown out and all charges against him dismissed, exonerating Mr. Aziz and his co-defendant, the late Khalil Islam. The momentous decision righted a half-century old injustice and began the process of correcting the record of a pivotal moment in our nation’s history.

“While I do not need this court, these prosecutors, or a piece of paper to tell me I am innocent, I am glad that my family, my friends, and the attorneys who have worked and supported me all these years are finally seeing the truth we have all known officially recognized,” Mr. Aziz said at the hearing.

“…I hope the same system that was responsible for this travesty of justice also take[s] responsibility for the immeasurable harm it caused me,” he added. 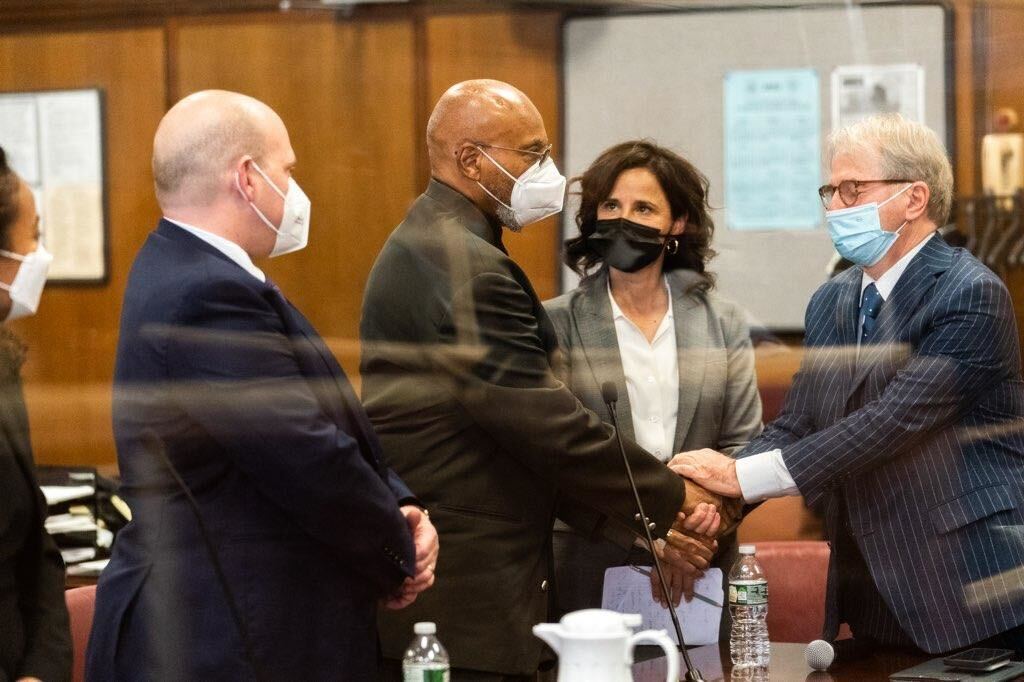 Both Mr. Aziz and Mr. Islam were exonerated based on the findings of a recent 22-month re-investigation that uncovered evidence that supported their alibis and innocence.

So many questions about the murder of Malcolm X have gone unanswered. Who really killed Malcolm X? Why wasn’t more done to prevent his assassination? Was the government complicit? And how were two innocent people sent to prison without a shred of physical evidence? Numerous historians, scholars, and journalists have sought answers, seeking the truth with the rigor and commitment that Malcolm X, Mr. Aziz, Mr. Islam, and all their families deserved, but were not afforded in 1965. 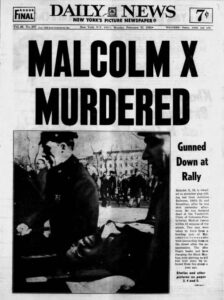 “The assassination of Malcolm X was a historic event that demanded a scrupulous investigation and prosecution but, instead, produced one of the most blatant miscarriages of justice that I have ever seen,” said Barry Scheck, co-founder of and special counsel to the Innocence Project.

Since January 2020, Mr. Aziz and Mr. Islam’s convictions have been the subject of a joint re-investigation by the Manhattan District Attorney’s Office, the Innocence Project, and Shanies Law. The findings revealed Federal Bureau of Investigation and New York Police Department documents that would likely have led to Mr. Aziz and Mr. Islam’s acquittal had they been turned over at the time of their 1966 trial. These documents not only contained information that pointed to people other than Mr. Aziz and Mr. Islam, but also revealed that undercover NYPD officers were in the ballroom and witnessed the shooting, but prosecutors did not disclose this information to the defense.

“The knowing perpetuation of a false narrative around one of the most significant events in the 20th century — while two innocent men sat wrongfully convicted of the crime and imprisoned — undermines the integrity of the criminal legal system and fosters profound distrust of police and prosecutors,” said Innocence Project Executive Director Christina Swarns. “This is the kind of misconduct that drove last year’s reckoning for racial justice and demands meaningful accountability and reform.”

Immediately after the attack on Malcolm X, Mujahid Abdul Halim (then known as Talmadge Hayer and Thomas Hagan) was arrested at the scene of the crime. Days later, Mr. Aziz (then known as Norman 3X Butler) and Mr. Islam (then Thomas 15X Johnson) were arrested, although neither had been at the Audubon Ballroom that day. All three were members of the Nation of Islam — the religious and political group to which Malcolm X previously belonged.

At trial, Mr. Aziz and Mr. Islam maintained their innocence and provided credible alibis, while Mr. Halim admitted to taking part in the assassination and testified that neither Mr. Aziz nor Mr. Islam had been involved. Yet, Mr. Aziz and Mr. Islam were convicted, even without any physical evidence tying them to the assassination, underscoring the very discrimination and racism that Malcolm X decried and sought to change.

“If Malcolm X cannot get justice — if we cannot get justice in one of the most high profile assassinations in U.S. history, what does that say about the capacity of our criminal legal system to provide justice to the thousands of Black people who are murdered everyday or the tens of thousands of Black men who have been convicted of crimes that they did not commit,” said Elizabeth Hinton, an associate professor of history and African American studies at Yale University and the author of America on Fire: The Untold History of Police Violence and Black Rebellion Since the 1960s.

Mr. Aziz and Mr. Islam ultimately spent a combined 42 years in prison, including significant time in solitary confinement. Mr. Aziz was released on parole in 1985 and returned to his six children. Two years later, Mr. Islam was released and reunited with his three children, and died in 2009.

“My father’s exoneration is a welcome but long overdue relief to our entire family,” said Khalil Islam, Mr. Islam’s eldest son. “We are pleased to see justice finally being served, but it is heartbreaking to know that he passed away without ever seeing his name cleared for his wrongful conviction. To the day he died, he never stopped fighting to prove his innocence.” 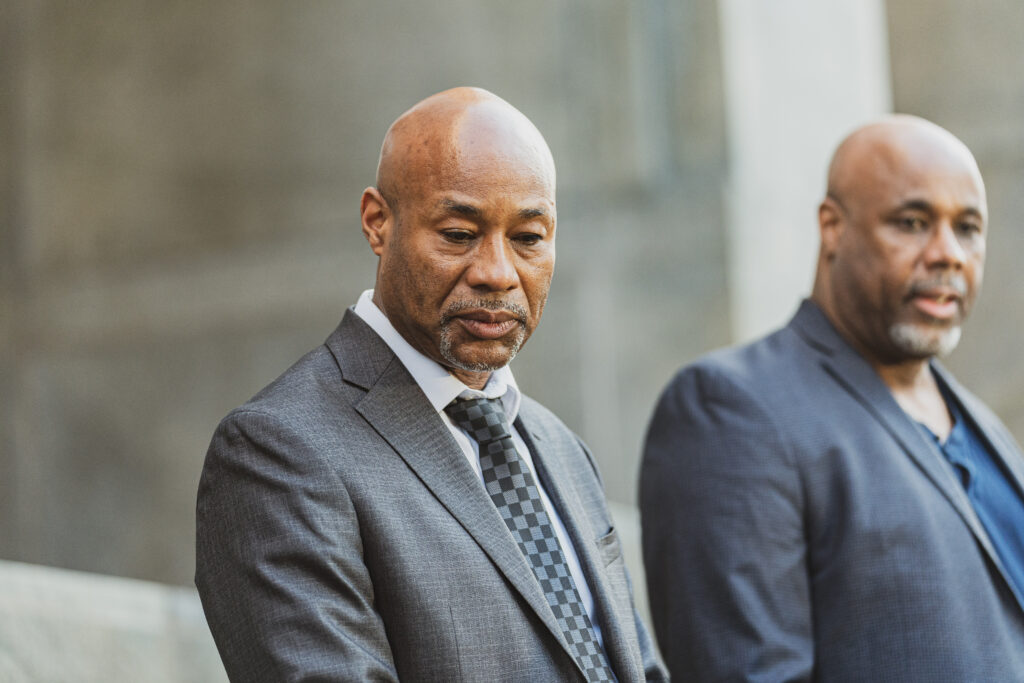 Mr. Islam’s son Ameen Johnson told the New York Times after the exoneration, “I honestly didn’t think that I was going to live to see the day.”

While Mr. Aziz and Mr. Islam’s exonerations represent a critical acknowledgment of the errors and misconduct in their cases, there are other important unanswered questions about the assassination of Malcolm X that fell outside the scope of this recent re-investigation and still need to be addressed.

“Today, history will document that Muhammad Aziz and Khalil Islam have been cleared in connection with the murder of our father, Malcolm X. I hope this long overdue vindication will bring a measure of peace to Mr. Aziz and his family, and to the family of Mr. Islam. However, my family still seeks justice for the murder of our father,” Ilyasah Shabazz, Malcolm X’s third daughter, said after the exoneration.

“My young pregnant mother witnessed this horrific killing and yet was able to carry on and raise their six daughters and provide a love-filled life while keeping the legacy and inspiration Malcolm brought to the world alive,” she said.

Malcolm X’s death cast a dark shadow over his life and legacy. He was a passionate advocate for liberty and freedom for Black people — and for all those who were oppressed. He spoke out against poverty, police brutality, and segregation in communities.

The mystery surrounding his killing allowed the injustices that followed in its wake to be overlooked, including an inadequate investigation, two wrongful convictions, and the decades of pain and irreparable harm done to Malcolm X’s family, Mr. Aziz’s family, and Mr. Islam’s family. 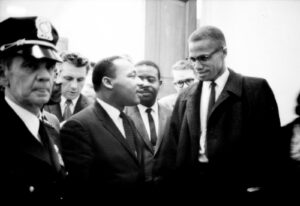 “We think of Malcolm X as this icon of history, and you might assume that because of his importance and influence that it would have motivated authorities to go above and beyond to get to the truth and to figure out who killed him at the time. But in fact, it’s both because of and in spite of who Malcolm X was that seeking justice for his murder — the murder of a Black activist who spoke out against police brutality and systemic oppression — was not a priority in the ‘60s,” said Vanessa Potkin, Innocence Project director of special litigation, who represented Mr. Aziz and Mr. Islam’s estate.

The undercover police officers present at the time of the crime did not testify at Mr. Aziz and Mr. Islam’s trial. And NYPD files unearthed in the investigation included information about a call to a New York Daily News reporter on the morning of the shooting indicating that Malcolm X was going to be killed, yet no uniformed officers were present at the event.

“We have to ask about law enforcement and the government’s failure to thoroughly investigate the assassination and its potential complicity or even active involvement — and that’s a separate and important issue that, itself, demands further inquiry,” Ms. Potkin added.

In pursuit of the truth

The hard work of addressing these questions has largely been carried out by determined scholars, historians, journalists, and researchers over the past several decades, resulting in several powerful works, including the Pulitzer Prize-winning book, The Dead Are Arising: The Life of Malcolm X, and the deeply insightful Netflix documentary series, Who Killed Malcolm X? The latter of which compelled a witness, identified only as J.M., to come forward with information reaffirming Mr. Aziz’s alibi after a screening in 2020. The efforts of individuals like Abdur-Rahman Muhammad, an independent historian, have propelled the search for the truth in this case forward, even after those who were wronged gave up.

“Full justice will not be served until all parties involved in the hateful orchestrated killing of our father are identified and brought to justice. I want to thank District Attorney Cyrus Vance and his team for reopening this investigation. It is our hope that finally the full truth can be learned,” Ms. Shabazz added.

The recent exoneration is just one part of securing justice. The same discrimination and racism that led to these injustices against Malcolm X, Mr. Aziz, and Mr. Islam persist today. They contribute to the disproportionate numbers of Black and brown people who have been wrongly convicted, to the over-incarceration of people of color across the country, and to police violence and brutality.

“Malcolm X’s unquenchable thirst for truth, justice, and Black dignity continues to speak to us long past his untimely death,” said Peniel Joseph, founding director of the Center for the Study of Race and Democracy University of Texas at Austin’s LBJ School of Public Affairs. “The exoneration of two of the innocent men charged with Malcolm’s assassination casts a spotlight on racial injustice in America’s criminal punishment system. Malcolm spent his whole life targeting that system, which he recognized as part of a structure of political violence rooted in America’s original sin of racial slavery.”

The misconduct and lack of accountability seen in this case are also seen in different ways in many of our clients’ cases and highlight an urgent need for continued reform efforts.

“Officially correcting the false historical narrative around one of the most significant events in 20th century U.S. history allows us to learn from and prevent future miscarriages of justice. Indeed, as George Orwell once said, ‘He who controls the past controls the future.’ Nowhere is that seen more clearly than in this case,” said Mr. Scheck.