Your Brain, Race, and Criminal Justice 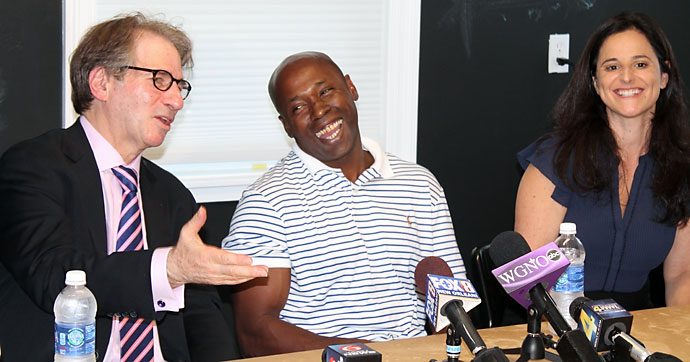 The faces of the exonerated are predominantly black and brown. In fact, more than 70% of the 329 DNA exonerees nationwide are people of color.

Researchers have used pictures of faces like these to study something called implicit bias. University of Washington psychologist Anthony G. Greenwald and his colleagues
devised an “implicit association test”—or IAT — in which people are instructed to match words and pictures that represent concepts, and response time and accuracy are used as indicators of the strength of the association between these concepts. This test is based on the premise that it is less mentally taxing to match concepts that are closely related in our minds (e.g., names of flowers like “tulip” and pleasant-meaning words like “happy”) than it is to match concepts that are not strongly related (e.g., names of insects like “wasp” and pleasant-meaning words like “happy”). People respond faster and more accurately when pairing concepts that are automatically associated. Racial bias has been measured in this way, and the test results show that participants are faster at pairing positive words with white faces than they are at pairing positive words with black faces. The converse is true with negative words. It turns out, most Americans—regardless of their own racial group—exhibit unconscious pro-white, anti-black attitudes on the IAT.

This is more than just a psychology laboratory phenomenon. It can be a matter of life or death.  University of Colorado psychologist Joshua Correll and his colleagues have studied “shoot/don’t shoot” decisions using videogame simulations of real world law enforcement scenarios. Players must decide whether or not to shoot at a target person who is either black or white and either holding a gun or an innocuous item like a wallet. The researchers hypothesized that unconscious associations between the concepts of black and violent would manifest in participants responding with greater speed and accuracy to “stereotype-consistent targets” (i.e., armed black targets and unarmed white targets) than to “stereotype-inconsistent targets” (i.e., armed whites and unarmed blacks). And this is exactly what they found.

In a speech at West Virginia State University in celebration of Black History Month earlier this year, National Bar Association President Pamela J. Meanes highlighted some real-world incidents that may be examples of this phenomenon. She contrasted the police response to Michael Brown in Ferguson, Missouri, last summer with the police response to Jared Loughner near Tucson, Arizona, in 2011. Loughner is a white man who shot and killed six people and injured 13 others (including former Arizona Congresswoman Gabrielle Giffords). The police did not shoot him. Brown was a black teenager who was unarmed when he was shot and killed by a police officer who perceived him as threatening.

Marvin Anderson (right) was wrongfully convicted in part because the true perpetrator told his victim that he “had a white girl” and Marvin was the only black man police knew who lived with a white woman.

Other researchers, like Stanford psychologist Jennifer L. Eberhardt, have investigated real-world examples of unconscious bias in the criminal justice system. Eberhardt and her colleagues examined Philadelphia-area cases in which black men were convicted of killing white victims. The researchers asked a group of students to rate photographs of the defendants on the degree to which they appeared “stereotypically black” based on a variety of features (e.g., hair texture, skin tone). Then the scientists compared the actual sentences of all the defendants. They found that defendants who were perceived as more stereotypically black were significantly more likely to have received a death sentence than defendants whose appearance was perceived as less stereotypically black. This was true even when other potentially influential factors like defendant socioeconomic status, attractiveness and severity of the crime were considered. Apparently, even those whose job is to be impartial—judges and juries— are not immune to unconscious bias.

Taken together, this body of research sends a clear message that regardless of who we are, and despite our best intentions, we harbor unconscious racial biases that profoundly affect our lives.

So why is this? As National Public Radio science correspondent Shankar Vedantam explains in his book, The Hidden Brain, our brains are evolutionarily designed to attune to patterns. This allows us to be efficient and make rapid decisions with little cognitive effort. He illustrates the way in which we learn from patterns by asking readers to imagine themselves as children observing the world. He explains that an impressionable child would likely notice that “most people on television are white, especially the people who are shown in positions of authority, dignity, and power” and suggests that a child might reasonably conclude that there is something inherently positive about being white. Vedantam concludes that biases are not necessarily indications of hostility or hatred, but rather the result of humans naturally identifying patterns. Unfortunately, we Americans are often responding to misleading patterns born of our shared legacy of dehumanization, oppression, and segregation based on race.

The good news is that since biases are learned, they can be unlearned. Ohio State University’s Kirwan Institute for the Study of Race and Ethnicity recently published a comprehensive review of the science of implicit bias and featured various innovative debiasing efforts like using virtual reality technology to change people’s perceptions of their own skin color (e.g., when light-skinned women of Spanish origin embodied a dark-skinned avatar, their implicit bias against dark-skinned people decreased). The report also advocates for practical interventions like increased inter-group contact, promotion of counter-stereotypic examples in society and training to counteract implicit biases. And these suggestions are being used. The Las Vegas Metropolitan Police Department, for instance, partnered with the United States Department of Justice to successfully implement trainings on racial biases and fair policing, and have seen positive results.

Every day, people of color face a world filled with implicit biases that can manifest as “microaggressions” or brief, commonplace verbal, behavioral and environmental indignities—whether intentional or unintentional—that communicate hostile, derogatory, or negative racial messages.  The recent deaths of Freddie Gray, Walter Scott, Eric Garner, and too many other black men at the hands of police officers have garnered national attention and caused outrage over this long-standing problem.  Now we all have a responsibility to maintain this momentum, to actively address our unconscious biases, and to commit to individually and collectively replacing our existing flawed racial associations.  And as we do so, we will hopefully help create a more equal criminal justice system, and the faces of the exonerated will be faces of individuals re-joining a more just society.