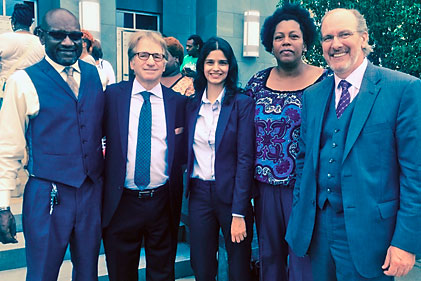 Nannie Howard (second from right) with her husband's attorneys.

Wednesday, Nannie Howard called for justice for her husband, Innocence Project client Darryl Howard, who has served over 20 years for a crime which DNA evidence proves he did not commit.

Howard was arrested in 1992 for a double-murder in which both victims, a mother and her 13-year-old daughter, exhibited signs of sexual assault.  DNA testing on sperm found on the daughter’s body excluded Howard as the source. But instead of freeing Howard, the prosecution proceeded with the trial, convincing the jury that no sexual assaults took place.


Howard was convicted and sentenced to 80 years, based on conflicting testimony of witnesses who said they saw Howard arguing with the mother the day before. One witness later recanted, stating he was coerced into implicating Howard. Another was paid $10,000 from a state compensation fund for her testimony.


Based on this evidence, Judge Orlando Hudson ruled in May that Howard’s convictions should be overturned and that he should be released pending a possible retrial. However, the prosecutor appealed.


“The state has made every effort to keep Darryl in prison during the appeal,” Nannie wrote. “Judge Hudson and the Court of Appeals denied the state’s requests. Nine months have passed, and Darryl still isn’t home. Now the N.C. Supreme Court has to decide whether Darryl can come home to his family while the appeal goes forward.”


During Howard’s 23 years of incarceration, Nannie wrote, he lost his sister, two brothers, an uncle and—four weeks ago—his son, who succumbed to an apparent drug-overdose. In his father’s absence, Nannie wrote, his son became mired in a life of drugs and crime.


“Had Darryl been released when Judge Hudson overturned his convictions, his son might still be alive today,” Nannie wrote.


Nannie says she hopes the court will take action soon so that Howard can begin picking up the pieces.


“A man who did nothing doesn’t deserve more time added onto what he’s already lost,” she wrote.