Paul Hildwin, now 60 and a four-time cancer survivor, is adjusting to life in Tampa and trying to stay healthy. 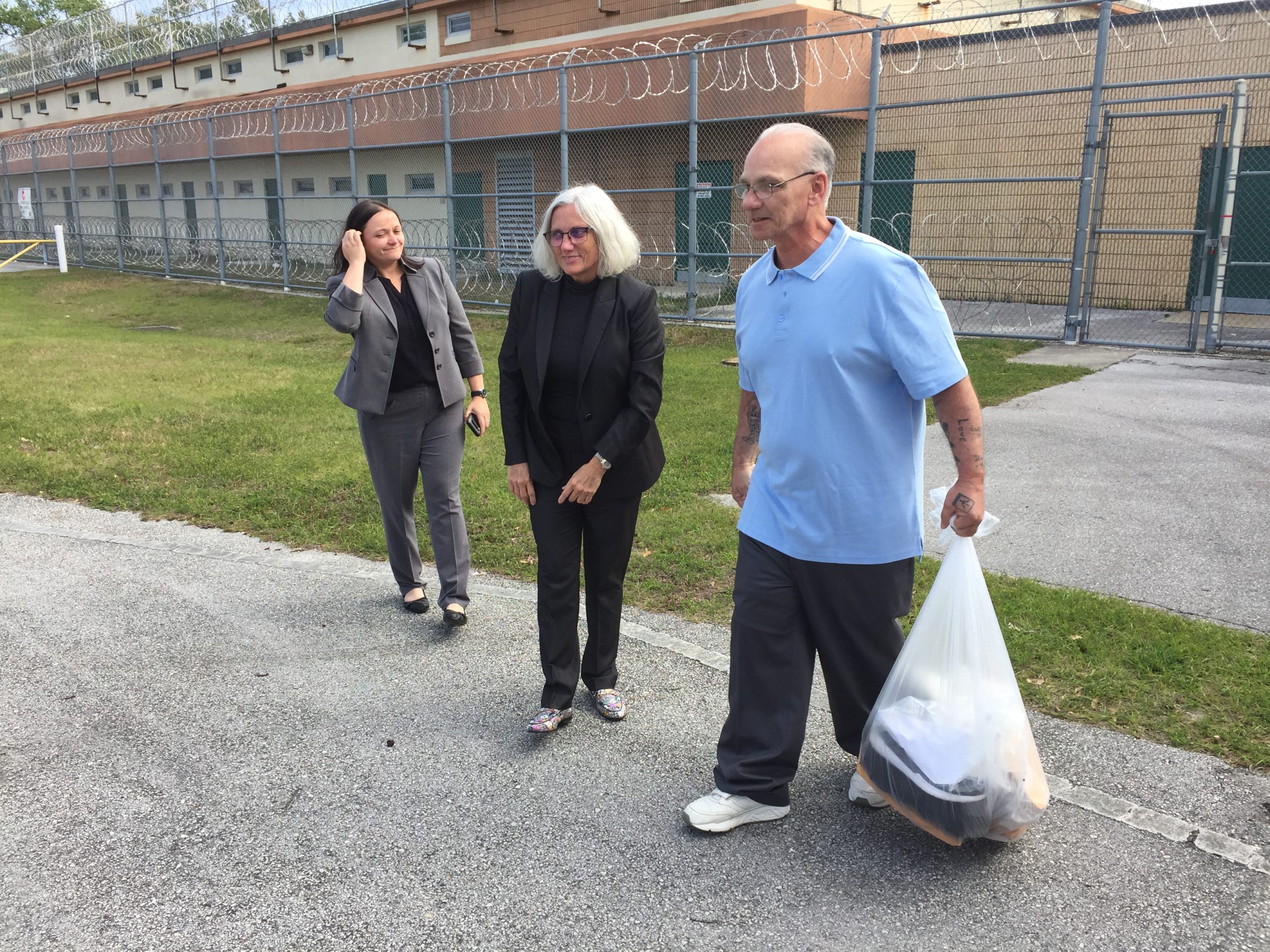 Last week, Paul Hildwin, an Innocence Project client, walked out of prison as a free person for the first time in 35 years. Hildwin spent 29 years on death row for a crime he did not commit before the Florida Supreme Court overturned his conviction in 2014 based on DNA testing. Prosecutors, however, sought to retry him, and so he remained in jail for nearly six more years — until March 9, 2020 — when he pleaded no contest to second degree murder to avoid a second death penalty trial.

Hildwin, now 60 and a four-time cancer survivor, simply wanted to end his lengthy journey through a legal system he describes as “hell.” The first thing Hildwin wanted to do was feel grass with his bare feet, which he was able to do within hours of being freed. It was an experience he waited three decades to have.

Since being released, Hildwin has been adjusting to his new life in Tampa, but, as people around the country struggle to deal with the COVID-19 (“coronavirus”) pandemic, Hildwin has faced unique challenges. Here’s what he had to say about his first weeks adjusting to life as a free person.

I hold the record for being the longest person ever confined in the Hernando County jail and the longest person to hold down four jobs there. I got a lot of respect from the officers and inmates during my time there — everyone knew Paul Hildwin.

So when I left, there was a standing ovation. The 40 guys in my housing unit shook my hand and told me to “be good.” And when I said, “Y’all take care now,” they just stood up and started clapping, whistling, hollering. All the units banged on the glass as I left the prison.

But what a time to come out of prison — right when that coronavirus hits. But it’s better to be out here than in there. On Florida’s death row, it’s 14 cells on each wing and they are open. The nurses and doctors walk up and down the hallway. So once the virus is in there, it will spread like wildfire.

I’ve survived cancer four times, and the last thing I had to deal with as far as cancer was June of last year — I had a tonsil enlarged in my throat the size of a ping pong ball. Fortunately, when they did the test it was all dead cancer cells, and my cancer is in remission.

When I left, there was a standing ovation.

But with my medical history and the coronavirus, I am not going to the gym, I am working out here at home. I try to stay at least 15 feet away from everyone. I limit my time around anyone. I don’t shake hands. I don’t give anyone dap or hugs anymore — I am doing everything I can to protect myself. I went to the grocery store, and was conscious of everyone around me, so I am stocked up good.

I am a wonderful cook and baker. In the county jail, I was well known for cooking and baking. One night, I made a pizza and others tried to argue with me and say it was a delivery pizza, but I made that with a microwave.

About a week after I was freed, I went to a barbeque with Clemente Aguirre — who I met when I was on death row — and Danny Brown, both exonerees who live in my community. We had a fun time. Earlier this week, I made deluxe hamburgers with everything: green peppers, onion, garlic and parmesan cheese. They were huge, and me and Clemente sat there eating them. And the other day, Kate O’Shea, an investigator that helped with my case, took me to the beach with her husband where I had my first sub [sandwich] since I came home, and it made me feel like a human again.

We walked in the sand and watched the kids playing on the little boards.

The big thing I’ve been focused on is learning how to live life out here. It’s a different world in there [prison] than it is out here.

The first thing I wanted to do was walk on grass — and it was so wonderful. Some people might think it’s kind of corny, but for me it was a big thing. At first, I was just trying to balance stepping on something soft. There was no grass to walk on in prison, always hard concrete. The grass was nice and soft.

Last night, I made a cup of coffee and sat outside on the porch of my little house, just sitting down not thinking about anything, and it really hit me, “Dude you’re free.” It was amazing. It made me cry.

I’m living in a beautiful little house and help with handy work for four houses that are all for exonerees. Me doing a little handyman work is my way of giving back a little bit and contributing.

Because of coronavirus, the probations department has closed their office, so they are doing home visits. I had my first one, and my officer surprised me — and he was surprised by my home.

He said, “Wow, this house is nice and clean.”

The whole time I was in my cell I never had a broom or a mop. I washed everything by hand, my sheets, laundry, everything. I took my laundry to the laundromat recently, and I didn’t know how to use the machine — it was embarrassing at first.

In prison, my whole life was in that cell. We went to the yard, I played volleyball two times a week. And then in jail, I used to walk all day long. But, out here, I bike — for medical and psychological reasons to get out there in society and feel normal.

I also paint and sketch. It’s my form of meditation.

I also paint and sketch. It’s my form of meditation. My favorites are landscapes. It gives me a chance to sort my thoughts out. Right now, I’m designing a laundry shed and drawing up the blueprint for that.

I am so grateful to the people that helped me get to where I am. People like my lawyer, Lyann Goudie, who represented me for the last six years — we call her “the beast,” because she’s that good — and Nina Morrison at the Innocence Project, who worked very hard on my case for ten years while I was on death row. And Kate, who put so much time, effort and heart into my case.

I look at Facebook and I see so many wonderful comments and good wishes, and I want to tell people who are still fighting for justice in prison: Don’t give up.

It’s a hard fight. We are fighting a very corrupt system, but don’t let it beat you. I am a perfect example … Some people call it lucky — I call it freedom. People inside need to know they are not fighting alone.

ICYMI: Paul Hildwin was freed yesterday after 35 years in prison (29 on death row) in Florida. He said he was most looking forward to feeling grass under his bare feet for the first time in decades — and it’s the first thing he did after being released. Help us congratulate him! pic.twitter.com/jWcsz3V4jZ