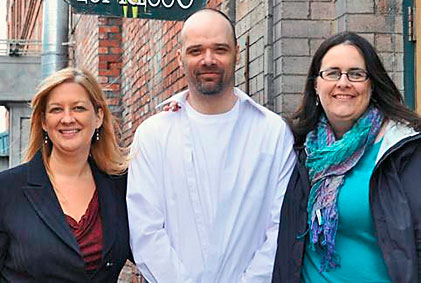 client Jeramie Davis was cleared of a 2007 bludgeoning death of John Allen, and freed Thursday in Spokane County, Washington. Despite his claims of innocence, Davis was convicted of killing the man with a baseball bat. DNA testing conducted at trial excluded Davis, yet he was still sentenced to 40 years in prison.

In 2011, a police-ordered DNA test on evidence from the crime scene was uploaded into the Combined DNA Index System (CODIS) and revealed another man’s profile on the baseball bat. The Spokane County Prosecutor then brought charges against Julio Davila, who was convicted of the same murder while Davis remained behind bars. After the Innocence Project Northwest took the case, the court granted Davis a new trial, and ultimately the murder charge was dropped.

Davis, now 42, is looking forward to bonding with his five-year-old son, who was born shortly after his arrest in 2007. Davis spent nearly six years in prison.


“I stayed in the word. That’s prison talk for God,” Davis said. “I knew this day would come. I just want to play with my son.”

The state is currently considering legislation that would compensate Davis and other wrongfully convicted individuals for each year spent behind bars, pay all child support owed while the individual was in custody and reimburse all court and attorneys’ fees up to $75,000.


If you live in Washington:


Ask your Senator to vote YES on the compensation bill, via our action center.