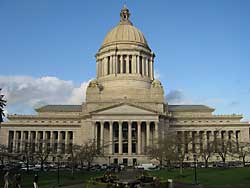 Lawmakers and others who oppose Washington State’s death penalty law

.  Sen. Debbie Regala, D-Tacoma, who introduced the bill, is herself the relative of a murder victim.  From the Seattle Times:


Regala knows what it’s like to want justice for a violent crime. The Tacoma Democrat said her brother-in-law was killed in 1980 and his body dumped in a Seattle park. The killer was never found, she said.

“It’s still painful and hard for me to talk about because the hurt never goes away,” Regala said, “but executing that person doesn’t solve that problem for me.”

Washington State has executed only five people since the present death penalty law was passed in 1981.

Seventeen people have been proven innocent and exonerated by DNA testing in the United States after serving time on death row. They were convicted in 11 states and served a combined 209 years in prison – including 187 years on death row – for crimes they didn’t commit.

If you live in Washington, use our


end capital punishment in your state

Read about The Innocence Project’s

Position on the Death Penalty


The Innocent and the Death Penalty