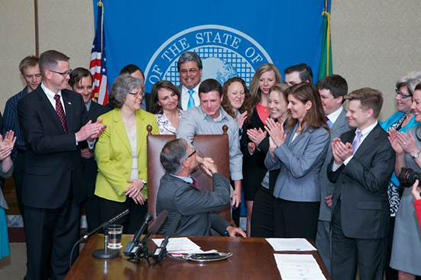 Washington becomes the latest state to pass a law that will compensate the wrongfully convicted for the years they spent in prison. On Wednesday, Gov. Jay Inslee signed a bill that will take effect in July, reported the Associated Press.
Under the new law, a wrongfully convicted person would be eligible to file a claim against the state once their conviction was reversed or vacated based on evidence of actual innocence. After a judge or jury determines the claim is valid, the court can award damages of $50,000 for each year of imprisonment, including time spent awaiting trial and an additional $50,000 for each year on death row.
The bill, which passed through the House and Senate with bipartisan and nearly unanimous support, was championed by Representative Tina Orwall and the

.
About one-third of the people exonerated after proving their innocence have not been compensated for the injustice they suffered and the time they spent incarcerated.
Read the

Compensation for the Wrongly Convicted

Does your state have a compensation statute