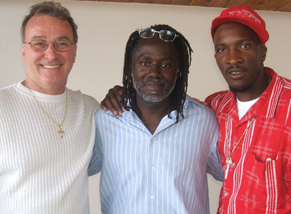 It was partly thanks to the tireless efforts of Niamh Gunn, an Irish student who worked for a summer at the Innocence Project, that Walter Swift (above) is free today. And it is also thanks to Gunn that he has become well-known in Ireland, where he and his daughter traveled on July 10 to attend a series of events with lawyers, celebrities and the media.

Swift served 26 years in Michigan prison before he was exonerated in May, thanks to investigation by a team on two continents, including lawyers and Cardozo clinic students at the Innocence Project and Gunn, who now works in business. On July 10, just six weeks after his exoneration, Swift traveled to Ireland with his daughter Audrey, where he was honored at a special fundraiser, which will help him build a new life in Detroit. He will stay in Ireland for three weeks, and his schedule is packed. On July 16, Innocence Project Co-Director Barry Scheck will join Swift as he is honored by the Law Society of Ireland. On July 19, Swift, Scheck and Gunn will be interviewed on Irish national television.


There wasn’t one injustice that caused Walter Swift’s wrongful conviction in Detroit in 1982 – there were many. His case is an example of the many things that can go wrong with a criminal investigation and trial, and how these problems can send the innocent to prison. He was misidentified by the victim in a highly unorthodox and unreliable identification procedure. Forensic evidence that could have cleared him at trial was never shared with the jury. His court-appointed lawyer was inadequate, and has since been suspended several times for errors in other cases.

It took 26 years for the truth in Walter Swift’s case to come to light, but he was finally exonerated in May after prosecutors agreed with Swift’s Innocence Project attorneys to drop the charges against him and release him from prison. A wide range of evidence led to his release, but DNA testing couldn’t be conducted because evidence had been lost or destroyed.