Virginia Man, Who Narrowly Escaped the Death Penalty, Exonerated by DNA Evidence To Be Released After Serving 33 Years 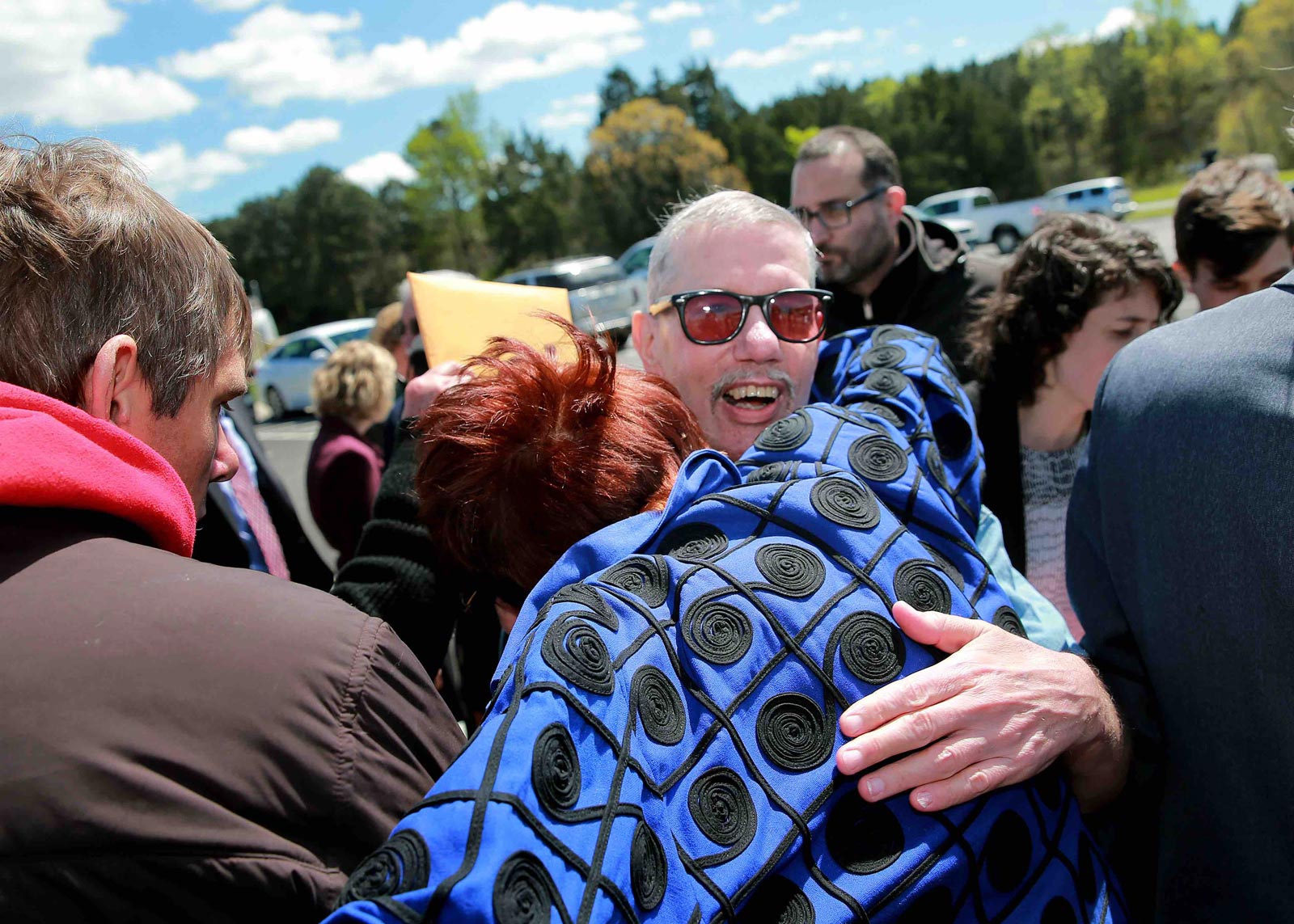 (Richmond VA – April 8, 2016) After the Virginia Supreme Court granted a writ of actual innocence to Keith Allen Harward on Thursday, Harward is expected to walk out of a Virginia prison a free man today after wrongly serving more than 33 years of a life sentence for a rape and murder he did not commit. Harward, who narrowly escaped the death penalty, was convicted primarily on the testimony of two forensic dentists who said that Harward’s teeth matched marks left on the rape victim. During the course of his prosecution 6 forensic dentists falsely claimed that Harward’s teeth matched a bite mark on one of the victims.  New DNA evidence definitively proved Harward’s innocence and pointed to Jerry Crotty as the real assailant.

“Mr. Harward is at least the 25thperson to have been wrongly convicted or indicted based on discredited bite mark evidence,” said Chris Fabricant, Director of Strategic Litigation for the Innocence Project, which is affiliated with Cardozo School of Law. “We have no idea how many other people may have been wrongly convicted based on this evidence, but any conviction resting on this grossly unreliable technique is inherently flawed.  Every state in the nation should be conducting reviews to see if there are others like Mr. Harward sitting in prison for crimes they didn’t commit.  Moreover, that this technique is still used in our justice system, including current capital prosecutions, presents a public safety threat.”

Peter Neufeld, Co-Director of the Innocence Project, added, “Unless and until our leaders in Washington take action to discourage the use of unreliable and unvalidated techniques such as bite marks, and instead create rigorous science-based standards for all forensics, we are doomed as a nation to endure hundreds more Harwards.”

Harward was convicted of a 1982 rape and murder in Newport News, Virginia.  The assailant broke into a home of a couple, killing a man and raping his wife.  During the course of the attack, the assailant bit the wife’s legs repeatedly. The wife, who was never able to identify Mr. Harward as the man who attacked her, told police that he was wearing a sailor’s uniform.  A dentist reviewed the dental records of Marines stationed to the USS Carl Vinson at the time and initially excluded Harward. He became a suspect six months later after his then-girlfriend reported to police that he had bitten her in a dispute.

At trial, the prosecution rested mainly on the testimony of two forensic dentists, Lowell Levine and Alvin Kagey, who claimed that Harward’s teeth matched photos of the bite mark left on the female victim. Levine is known as one of the foremost experts in forensic bite mark analysis and has served as President of the American Academy of Forensic Sciences, the Forensic Sciences Foundation and the American Board of Forensic Odontology. The other evidence against Harward at trial consisted mainly of the testimony of a security guard who claimed to have seen Harward enter the shipyard with a bloody uniform in the early morning after the attack. The Innocence Project later learned that the security guard’s identification occurred only after the witness was placed under hypnosis, a practice that is now known to be highly unreliable.

Despite testifying in his own defense and presenting evidence he didn’t match the victim’s description, Harward was convicted of capital murder but was spared the death penalty by the jury.  His conviction was reversed in 1985 because of an issue regarding how the capital murder statute should be interpreted. He was retried and convicted again in 1986 but was no longer eligible for the death penalty under Virginia law.  At the second trial, the prosecution argued that Harward could not be excluded as a source of blood evidence recovered on crime scene evidence, but the Innocence Project subsequently learned that the blood evidence did in fact prove that Harward’s blood type did not match blood recovered on the evidence.

The Innocence Project performed DNA testing on the rape kit and numerous other pieces of crime scene evidence. The testing excluded Harward and identified Jerry Crotty as the person responsible for committing the crime.  Crotty, who is now deceased, had a violent criminal record and was a sailor on the USS Carl Vinson at the time of the crime.

“We are grateful to Attorney General Mark Herring and Newport News District Attorney Howard Gwynn for cooperating throughout this case and supporting Mr. Harward’s writ of actual innocence,” said Olga Akselrod, Senior Staff Attorney at the Innocence Project. “Without their support, Mr. Harward’s struggle for justice would have been much harder.”

Harward is at least the 25th person to have been wrongfully convicted or indicted based at least in part on bite mark evidence. Despite the fact that for decades courts have permitted forensic dentists to testify in criminal trials, there is a complete lack of scientific support for claims that a suspect can be identified from an injury on a victim’s skin.  This was noted in the National Academy of Science’s groundbreaking 2009 report, Strengthening Forensic Science in the United States: A Path Forward, which found, “no evidence of an existing scientific basis for identifying an individual [through bite mark comparison] to the exclusion of all others.”

After hearing from leading experts on the reliability of bite mark evidence, in February the Texas Forensic Science Commission recommend that the state issue a moratorium on the use of bite mark analysis in prosecutions throughout the state.  The American Board of Forensic Odontologist has even recently changed its guidelines to acknowledge that the technique cannot be used to identify a person as the biter.

“There is not a shred of scientific evidence supporting this erroneous forensic practice, yet it is still permissible in courtrooms across the nation,” said Dana Delger, a staff attorney with the Innocence Project’s Strategic Litigation Unit. “Hopefully Mr. Harward’s case will once and for all persuade judges and law enforcement that this unreliable evidence has no use in criminal prosecutions.”

Donald Salzman, a partner at Skadden, Arps, Slate, Meagher & Flom LLP, who worked on this case in collaboration with the Midatlantic Innocence Project, added, “This has been a extremely long fight for freedom for Mr. Harward.  We are pleased that he is finally going to be reunited with his family and hope law enforcement throughout the nation learns for the painful lessons learned.”