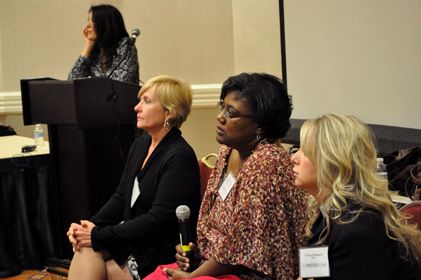 Katie Monroe at the podium with (left to right) Jennifer Thompson, Yolanda Littlejohn and Christy Sheppard

, Innocence Project Senior Advocate for National Partnerships
Our advocacy work to improve the criminal justice system has benefitted enormously from the expert voices of victims and their families who bear witness to the fact that nobody benefits from a wrongful conviction.  However, I have found in talking to these individuals that speaking out about their experiences can also take a toll. To better understand how to work with crime victims and their families, I moderated a panel at the 2013 Innocence Network Conference in Charlotte, North Carolina, and I invited three panelists to describe their experiences.
A bit of background first: the

and followed it with a breakthrough conference panel on the issue.
Convened in April, our panel sought to continue the conversation. Jennifer Thompson, Yolanda Littlejohn and Christy Sheppard shared their experiences both from being involved in a wrongful conviction case and advocating for criminal justice reform.  They described the unique hardship faced by crime victims and victims’ families in such cases and discussed steps that innocence organizations might be able to take to help them get much needed support during the exoneration process. Victims and their families suffer from the knowledge that a mistake was made and the real perpetrator not apprehended or punished, from having to relive the trauma of the original crime, and from losing faith in a system that they relied on to protect them and serve them justice.  They also often feel lost and invisible when a claim of innocence is being pursued and won in court.
Jennifer Thompson is an advocate for judicial reform, the need to combat sexual violence, abolition of the death penalty, the fallibility of eyewitness testimony, and the healing power of forgiveness. Her strong convictions were born of a brutal rape she suffered as a 22-year-old college student. Her compelling testimony sent a young man to a life term in prison for a crime he did not commit. That man,

, was eventually freed thanks in large part to his persistence in maintaining his innocence and to DNA testing, which eventually identified the true perpetrator. Jennifer credits Ronald with teaching her the healing power of forgiveness and grace. Together they co-authored a joint memoir,

, a New York Times best-seller, which recounts their journeys, the tragedy that brought them together, and their mutual conviction that such errors must be recognized, and that concrete reforms can lessen the probability of such mistakes.
Yolanda Littlejohn’s sister, Jacquetta Thomas, was murdered in Raleigh, North Carolina, in 1991. Two men were arrested for her murder. One was never convicted; the other, Greg Taylor, was tried, convicted, and sentenced to life in prison. In 2009, Taylor was exonerated and released from prison when DNA evidence proved that he could not have been the killer. The murder of Jacquetta Thomas is now a cold case – an unsolved homicide. Yolanda has been active in the effort to repeal her state’s death penalty and has spoken to groups of victims, telling her story and discussing the effects of exoneration on victims’ families. Yolanda is co-founder and the Director of Victims After Exoneration, a project of Murder Victims Families for Human Rights.
Christy Sheppard is a Licensed Professional Counselor who specializes in child and family therapy. Christy is also an advocate for victims’ issues and awareness in cases where there has been an exoneration. Christy’s cousin, Debra Sue Carter, was murdered in 1982. Two men,

where convicted and then exonerated for this crime after spending 12 years in prison and on death row.
Jennifer, Yolanda and Christy also addressed ways the Network might be able to assist crime victims and victims’ families in connecting with and providing support for each other during exonerations.  Finally, they explored opportunities for crime victims and their families to help lead efforts to reform the criminal justice system and prevent wrongful convictions for the benefit of all.  Collaborating with crime victims in our innocence work is profoundly important, and I applaud the Network for its leadership, sensitivity, and vision.