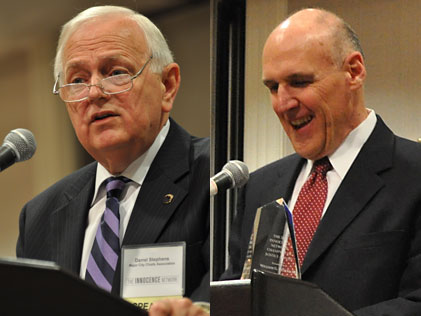 The Innocence Network presented Chief Brooks with the 2012 “Champion of Justice” award. The award is given to public servants who go above and beyond in their efforts to free the wrongly convicted or protect against future wrongful convictions. Previous honorees include Jim Petro, former Ohio Attorney General, and Jim Trainum, retired detective with the Washington D.C. Metropolitan Police Department.

During his acceptance speech, Chief Brooks reflected on the openness of law enforcement officers towards reforms to prevent wrongful convictions:

“Not a single police officer has approached me following our presentations [on eyewitness identification] to say that he disagrees with what we have said. Without exception, we hear police officers tell us that they favor these reforms.”

Chief Brooks has been a police academy instructor for over 25 years and an educator on police lineup reforms for five years. In that time, he has partnered with Innocence Network members to train law enforcement personnel about scientifically supported best practices and to instruct thousands of officers nationwide about the importance of implementing criminal justice reforms to prevent wrongful convictions. Chief Brooks’ work in Connecticut and Michigan contributed to statewide adoption of eyewitness identification best practices in both states. In his home state, he sits on the Supreme Judicial Court’s Police Practice Committee, which is set to issue recommendations in the coming months. Chief Brooks concluded his remarks by saying, “I am honored to receive this award, and you have humbled me with it.”

The Innocence Network also invited Darrel Stephens, former Police Chief of the Charlotte Police Department, to deliver the keynote address. As police chief, Stephens implemented reforms that are proven to decrease mistaken eyewitness identifications. He also helped implement these reforms statewide, putting North Carolina at the forefront of a national trend in reforms to eyewitness identification procedures to prevent wrongful convictions. Stephens currently serves as the Executive Director of the Major City Chiefs Association and a Board Member of the Innocence Project.

During his keynote, Stephens spoke about police agencies across the country implementing reforms to help prevent wrongful convictions:

“There are hundreds of police departments that have or are taking the steps…to minimize the potential for wrongful convictions. New York City announced last year that it would begin videotaping interrogations. Laws in 18 states and the District of Columbia require it. More police agencies are adopting best practices in eyewitness identification and improvements are being made in forensics. And both police and prosecutors are increasing their participation in wrongful conviction cases.”

Learn more about the

this issue of The Innocence Project In Print