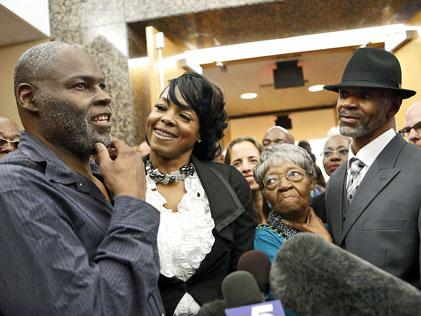 Stanley Mozee (left) and Dennis Allen (right) are greeted by family, supporters and the media after being released in Dallas in 2014. (Image: Lara Solt)

Dennis Lee Allen and Stanley Orson Mozee walked out of a Dallas County courtroom today after the judge ruled that their murder convictions from 2000 should be overturned based on previously withheld evidence.  The Innocence Project and the Innocence Project of Texas had petitioned for the pair’s release based on evidence that indicates serious prosecutorial misconduct, which was discovered in the prosecutor’s original file under the “open file” policy adopted by District Attorney Craig Watkins in 2008, as well as the favorable results of recent DNA testing on bloodstains and other key evidence from the crime scene.  District Attorney Watkins and his Conviction Integrity Unit agreed that the prosecutor withheld exculpatory evidence and joined the lawyers for Mozee and Allen in seeking today’s ruling that the pair did not receive a fair trial on that basis.

Among the contents in former Assistant District Attorney Rick Jackson’s file were letters from jailhouse informants seeking reduced sentences in exchange for their testimony. At the trial, the informants, Zane Smith and Lonel Hardeman, claimed to have heard Allen and Mozee admitting to the murder, and in response to questioning by Jackson, swore to the jury that they didn’t receive, or even seek, any favorable treatment for their testimony. These letters were never disclosed during the 2000 trial, despite orders from the judge to turn over prior statements made by all witnesses, and the two inmates have since told defense attorneys their initial testimony was false.

Allen and Mozee were convicted of the 1999 murder of Reverend Jesse Borns Jr., despite a lack of physical evidence connecting them to the crime. Borns was stabbed to death outside a store where he worked. In addition to a lack of evidence linking Allen and Mozee to the murder, there were no witnesses who placed them at the scene of the crime. Ultimately, the two men were convicted based largely on testimony from jailhouse informants and an unrecorded confession from Mozee, who has a history of mental illness. Shortly after he confessed, Mozee recanted and said he was coerced into signing a statement written out for him by police.

The legal organizations performed DNA testing on a trove of physical evidence recovered from the scene, and none of the items came from the two defendants. However, DNA from one or more persons that does not match the defendants or the victim was identified on several items including a bloodstain from the scene, a hammer found next to the victim’s body, and a hair underneath the victim’s fingernails, potentially from a close-range struggle in which the victim suffered numerous defensive wounds to his hands.

In today’s proceeding, Dallas County District Judge Mark Stoltz issued findings of fact and conclusions of law, and recommended that the convictions be overturned.  These findings will now go before the Texas Court of Criminal Appeals for review.

KTVT – CBS Dallas Ft. Worth spoke to Mozee and Allen after the hearing.

“I have no animosity toward anyone,” stated Mozee on Tuesday. “As a matter of fact, I give the Dallas County judicial system a positive note, if the court of criminal appeals will act and do the just thing in this matter.”

“It feels wonderful,” said Allen. “I mean, it’s kind of hard to explain, but try to imagine the greatest joy you have ever experienced in your life, and that’s what I’m feeling right now.

Allen and Mozee were surrounded in court by family members and other Dallas area exonerees when they were released today.  Among the Dallas area exonerees were Mr. Mozee’s childhood friends Cornelius Dupree and Keith Turner; all three men attended Lincoln High School together in the 1970s, and all three were later freed from prison based on newly discovered evidence of their innocence.

and more in today’s