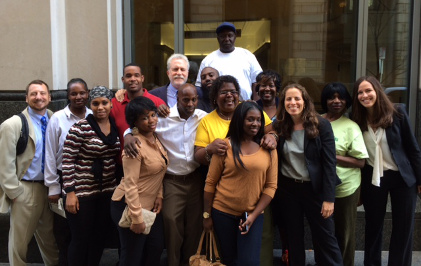 Photo: Anthony Wright’s family and legal team celebrate his victory outside the courthouse in Philadelphia.

With the consent of the Philadelphia district attorney, a Court of Common Pleas judge today granted Anthony Wright’s motion to overturn his convictions. Wright served 23 years for a rape and murder that new DNA testing reveals was committed by another man with a long criminal history. In addition, DNA testing of clothing alleged by police to have been worn by Wright to commit the crime, now shows that the clothes were not, in fact, his.

“You are now presumed innocent until proven guilty,” said Judge D. Webster. Wright wiped away his tears as the judge announced his ruling.

Police claimed that after merely 14 minutes in custody, Wright voluntarily gave a full and complete signed confession of the 1991 rape and murder of 77-year-old North Philadelphia resident Louise Talley. Wright, however, who was just 20 years old when he was arrested, has always maintained his innocence and testified that he only signed the alleged confession, which the police wrote out, after the interrogating detectives threatened him with bodily harm. Subsequent to securing the confession, police also claimed that they recovered from Wright’s home the bloody clothes that Wright wore on the night of the crime. DNA testing now proves that the clothing actually belonged to the victim, which raises serious questions about where the police actually recovered the clothing.

Wright obtained the help of the Innocence Project, which sought to conduct DNA testing of the crime scene evidence. The former Philadelphia district attorney objected to the testing for more than five years, and the case eventually went to the Pennsylvania Supreme Court, which sent the case back to the lower court for a new hearing on DNA testing in 2011. At that point, new District Attorney Seth Williams agreed to permit testing.

The testing of the rape kit identified spermatozoa recovered from the victim’s vagina and rectum that excluded Wright as the source and identified Ronnie Byrd, as the real perpetrator. Byrd was twice the age of Wright and almost half the age of the victim at the time of the crime and had a long criminal record, which included crimes in and around Philadelphia. Byrd died in South Carolina in early 2013 and was never able to be questioned about the crime or prosecuted for it.

Wright was surrounded by his relatives when he received the news in court today that his conviction was reversed. The case was adjourned to give the district attorney’s office time to conduct further investigation and decide whether it intends to retry Wright for the crime.

In addition to the Innocence Project, Wright is represented by Schnader Harrison Segal & Lewis LLP.