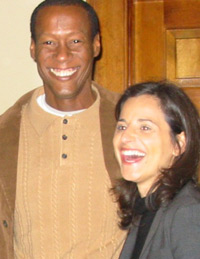 spent nearly a quarter of a century in Georgia prisons for a rape he did not commit. Three years ago this week, he was exonerated and released from prison based on DNA testing proving that another man was the perpetrator. (Left, Clark on the day of his exoneration, with Innocence Project Staff Attorney Vanessa Potkin)

Since the day of his arrest, Clark maintained his innocence. He was arrested one week after a woman was abducted and raped in Atlanta. Clark was arrested after he was spotted driving the victim's car. He was initially not a suspect because he didn’t match the description of the perpetrator. The victim had said the attacker was 5’7”; Clark is 6’2”. He was included in a photo lineup and a subsequent live lineup, however, and the victim chose him as the perpetrator. Clark was the only person included in both the photo and live lineups.

During the trial, the victim testified there was no doubt in her mind Clark was her attacker, saying, "I will never forget the face, the skin color, and his voice." Clark said he had borrowed the car from his friend Tony Arnold, but police never followed the lead. Clark was convicted and sentenced to two life terms plus 20 years.

Twenty-one years after Clark was convicted, the Innocence Project was able to secure court-ordered DNA testing on biological evidence collected from the victim’s body after the attack. The test results showed that Clark could not have been a source of the sperm cells found on the victim. Furthermore, prosecutors searched state and federal DNA databases of convicted felons. The DNA profile taken from the rape kit matched Tony Arnold, who was serving time for an unrelated conviction. Upon Clark's exoneration, Arnold was charged with the rape for which Clark had been wrongfully convicted.

In 2007, Clark received $1.2 million in state compensation, in individual legislation written specifically for him. Georgia is still

without a law compensating the wrongfully convicted upon release.

Today, Clark has a steady job, owns an apartment and says that support from his community and the Innocence Project Exoneree Fund helped him get on his feet: "People have been very supportive. They've donated money, gifts, sent letters. I appreciated that a lot. I say thank you and God bless you and show my appreciation by trying to do what is right."