We talked to Clemente Aguirre-Jarquin about the coronavirus crisis, Florida's compensation laws, and the death penalty.

The COVID-19 (coronavirus) crisis has created new challenges for exonerees and the need to fix Florida’s compensation laws is now more urgent than ever. Last week, we hosted a virtual town hall to discuss the impact of this pandemic on Florida exonerees and the innocent who remain behind bars. Among the panelists was our former client, Clemente Aguirre-Jarquin.

Clemente was wrongly convicted in 2006 for the stabbing deaths of his two former neighbors and was denied compensation after spending 14 years in prison — including a decade on death row — because he didn’t file his claim within 90 days of his conviction being overturned, as required under the law. But the reason Clemente did not file in that time period was because — even after the Florida Supreme Court threw out his conviction — he remained in jail as prosecutors announced they would to retry him for the murder and seek the death penalty a second time. It was not until two years later that prosecutors finally dropped all charges and Clemente was exonerated.  As a free man, he quickly filed for compensation. But the judge who reviewed his claim said that his filing came too late under Florida’s existing version of the law, and that the court had no choice but to dismiss his application. To this day, Clemente has not received any compensation from the state of Florida for the 12 years he wrongfully spent in prison.

We talked to Clemente about the coronavirus crisis, Florida’s compensation laws, among other things, and this is what he had to say:

This pandemic has affected us all. But it affects us, the exonerees in a different way. No one can leave their homes, and I know it is for our own good. But not being able to go anywhere, one way or another, makes you go back in time and think about when you were in prison. You also panic about being accused of not obeying those orders. And you panic about going outside because you do not want to get sick, since many of us do not have health insurance.

Three other exonerees also live in the community where I live, among them Paul Hildwin, who was released from prison a few weeks ago. I met Paul for the first time around 2009 when we were in the same prison, the same ward, but in different cells. The first thing he said to me when he first saw me was “you look good with hair.” Paul has won the battle against cancer four times, and he just turned 60 years old, which we celebrated here eating carne asada. It is important to have other people by your side who understand and know what you have been through. We can support each other, especially in these moments of panic and uncertainty for everyone.

When I first heard about COVID-19, I was sad to think about all the people who are still incarcerated, as there is no good medical care in prison. I have not heard exactly how many positive cases of coronavirus are currently in prison, but I know from personal experience how horrible the medical system is. They never have what it takes to treat people and they never give it the importance that certain cases require.

When I was in prison, I suffered from a hernia in my stomach. Every time I ate it gave me a strong burning pain; I complained to the guards, but they ignored me. A year later, my tonsils became horribly infected due to the acid produced by the hernia in my stomach. That acid was burning my esophagus and my throat. I was constantly asking the medical staff for help, but they refused to give me proper medical treatment with the excuse that it was not life threatening. Until the infection got to my gums, and my teeth started falling out. The pain was intolerable. Finally, my attorney sent someone to take pictures of my throat and mouth. I remember it was a Friday, and by Monday morning I was transferred to Jacksonville Memorial Hospital. At the hospital, they removed my tonsils, but it was too late. Due to the infection and the lack of timely medical treatment, I lost 21 teeth (most adults have 32 teeth).

That is why it is important to expose what happens in prisons. Since I was exonerated, I have gone to several universities to talk about my experience, and when I tell my story, everyone is surprised. The truth is that there are many people who are ignorant about the carceral experience. That is why it is essential to educate everyone about what really happens in prisons, not only in the state of Florida, but throughout the United States. Equally crucial is showing people the challenges that we exonerees face when we get out of prison.

One of the best times I have experienced this year was the first time I traveled to Tallahassee, to speak to Senators about Florida’s compensation laws. I shared my story with them, and explained how the state appeals or tries to put you on trial again and tries to hold you in jail as long as they can, so the time you must file your claim for compensation passes, and you don’t even notice it. The statute is written poorly. When the Senators voted that time, the compensation bill passed 30-0, and I was there to witness. (Update: The bill passed 6 committees, but ultimately didn’t pass the full Senate and House before session ended on March 13th). It was a pleasure to be part of that campaign, and to tell everyone who was present that it is not fair to convict someone for a crime that they did not commit, and not to compensate them for that injustice. 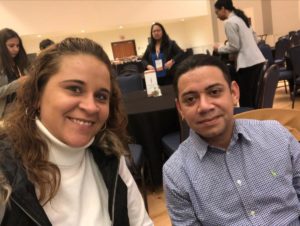 Compensation would also have given me the opportunity to better prepare for this pandemic, to be able to buy everything I need in time, to have the peace of mind of going to the doctor without worrying about what they will charge me, and the chance to buy medicine, if necessary. It would give me the freedom that I do not have now, that many of us exonerees do not have because we are financially limited by a tight budget.

We, the exonerees from Florida, and especially those who live in this community, take this crisis very seriously, and we take extreme care of ourselves.

There are many people who want to help those who have been exonerated. I know that in these difficult times, when so many people have lost their jobs, it is not easy to ask for donations. But it doesn’t just have to be money. People can donate boxes of food, medicine, gloves, masks, Tylenol, first aid, etc. It may be insignificant for others, but to us it means a lot.

I also believe that people should learn more about the death penalty. There have been more than 170 cases of exonerees who were on death row, including me. I spent 10 years on death row. It is important to educate yourself about how the United States court system works, realize that each state is different, and has different laws. It is important that people learn about the harm that is done to people.

So I call on those who are willing and able to donate to the Innocence Project. It would be extraordinary. The Innocence Project has a phenomenal record of helping people like me who were wrongly convicted of a crime. Without the help of the Innocence Project I would never have been able to get out of prison, and would possibly still be in prison or even dead. Please make a donation, it can be $1, $5, $10, whatever you can give. I promise it will be used in a very good way.

Help the wrongly convicted during the COVID-19 crisis