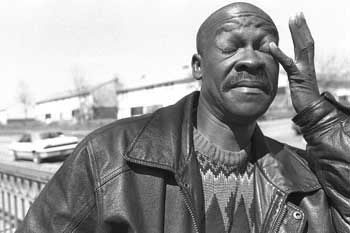 was exonerated of all charges surrounding his alleged involvement in what has become known as The Ford Heights Four Case. In 1985, Jimerson had been found guilty of committing a rape and double murder in Ford Heights, Illinois. He served nearly 11 years on death row before his release.

Five defendants spent a combined 75 years in prison for the murders before DNA testing proved their innocence. Several of the most prominent causes of wrongful conviction were involved: including false confessions, unvalidated forensic science, bad lawyering and more. The group was finally freed in 1996.

Read a summary of the cases here

One of Jimerson’s first stops as a free man was to visit the graves of his parents, both of whom had died while he was in prison. Moreover, because he had been in jail so long, Jimerson hardly knew his three grown daughters and had never met his five grandchildren. When asked how he felt about the time he had lost with members of family, Jimerson told the Chicago Tribune “Sure it hurts. It hurts a lot. But I've got to move on. Because by the grace of God I'm not going to let anger just eat me out." Upon his release, Jimerson was happy to be able to reconnect with some of his relatives and told the Chicago Sun-Times that he was determined to find a job and get a driver’s license.

In 1999, Jimerson received about $9 million as part of a wrongful prosecution settlement between Cook County and the Ford Heights Four. At the time, it was the largest civil rights settlement in U.S. history.