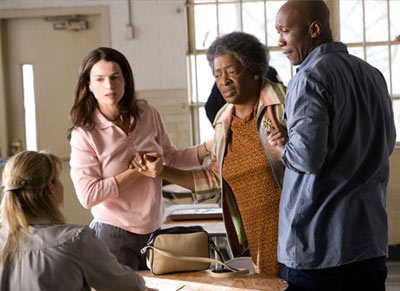 “The Wronged Man,” a moving new Lifetime film, tells the story of Calvin Willis’ wrongful conviction in Louisiana and the fight to free him. The movie premieres on Lifetime Movie Network Sunday night at 8 p.m. ET and plays again Monday night, January 18, at 8 p.m. ET.

Calvin Willis served more than 21 years in Louisiana prisons for a child rape he didn’t commit before DNA testing obtained by the Innocence Project proved his innocence and led to his exoneration. For 15 years, a paralegal named Janet "Prissy" Gregory advocated on Willis’ behalf, filing appeals for a new trial and raising money to pay for DNA testing. Gregory is played in the film by Julia Ormond. Willis is played by Mahershalalhashbaz Ali. Pictured above is a scene from the film with Ormond (left), Tonea Stewart (playing Momma Newton, the grandmother who raised Calvin) and Ali.

Airing with the film is a new Public Service Announcement featuring Julia Ormond on wrongful convictions and the work of the Innocence Project.

Did you see the film?