The Pseudo-Science of Dexter 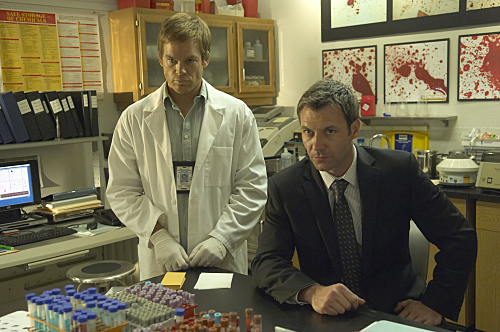 Working at the Innocence Project has given me tremendous insight into necessary reforms needed to improve the criminal justice system. It has also made me realize that TV crime dramas don’t give an accurate picture of forensic science.

The first crime drama I watched regularly was “Columbo.” There was something about that disheveled homicide detective that always seemed charming to me. Over the years, I’ve watched “NYPD Blue” and various seasons of “New York Undercover,” “CSI Miami,” “The Closer” and, of course, “Law & Order.”

My latest crime drama obsession is “

,” which concluded its fifth season last night. There’s something likable about the Miami Homicide forensics expert who analyzes blood spatter patterns in his day job, and then when he’s off the clock, kills criminals he believes have fallen through the cracks of the justice system.

When I am talking to reporters about unproven scientific methods, I let them know that bloodstain pattern analysis is completely unreliable and point them to a

noting that there are huge uncertainties associated with this evidence. Yet, when I watch Dexter recreate a crime scene by bashing in a dummy head filled with a red gooey concoction, it all seems so real. Seemingly convinced by Dexter’s skills as a blood spatter analyst, I walked over to Sarah Chu’s office to do my own investigating. Chu is the Innocence Project Forensic Policy Associate, and if anyone could tell me the truth about bloodstain pattern analysis, it would be her.

Chu informed me that there are indeed serious questions about the reliability of bloodstain analysis. Only two of the professional organizations for blood pattern “experts” have any requirements for membership, and only one of them has an educational requirement.

Chu reminded me that just because there are organizations devoted to analyzing bloodstain patterns, it doesn’t mean the technique is scientifically accepted. The NAS report reveals that blood pattern analysts are more subjective than scientific and that many cases involving the technique have targeted requests from either the defense or prosecution which can lead to partiality. Just recently, a Connecticut defense attorney

challenged the legitimacy of the practice

in a murder case.

My opinion of “Dexter” has changed a bit.  The suspense still drives me to cover my eyes when the scary music comes on, and I do love the imaginative plot lines.  But, I’m disappointed to realize I was fooled by the apparent science of Dexter’s blood analysis. Not only is he a part time serial killer, his profession has been proven neither valid nor reliable.