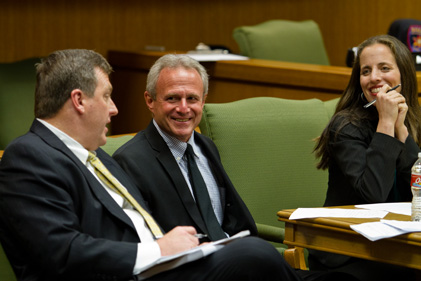 The second installment of the Texas Tribune’s series that explores the causes and consequences of prosecutorial errors calls for reforms in the wake of wrongful convictions attributed to prosecutorial misconduct.

Michael Morton spent 25 years in prison for the murder of his wife before DNA testing of crime scene evidence proved his innocence and identified a convicted offender in the national DNA databank as perpetrator. Upon his release, Morton’s attorneys recommended a Court of Inquiry to investigate possible misconduct committed by Ken Anderson, the former Williamson County District Attorney who prosecuted Morton. Morton is also urging legislators to implement new laws that hold prosecutors accountable for misconduct, according to the Texas Tribune.


“I can’t make up for those lost years, but what I can do is prevent what happened to me from happening to someone else,” he says.

The Tribune conducted a study of 86 cases of wrongful conviction in Texas and found that 21—or 25%—involved prosecutorial error. And in 17 of those 21, the courts ruled that exculpatory evidence was not given to defense lawyers.

According to Betty Blackwell, an Austin criminal defense lawyer and Chair of the State Bar Commission for Lawyer Discipline, the bar can only take action if a person knew it was exculpatory evidence and still withheld it. And on the rare occasion the agency determines that a prosecutor engaged in misconduct, disciplinary measures are often handed out privately. The investigation against Anderson was made public.

In an attempt to prevent prosecutorial errors and improve accountability for intentional violations, the American Bar Association recommends reciprocal open discovery between the defense and prosecutors.

Meanwhile, Morton remains optimistic as he awaits the September Court of Inquiry that will determine whether Anderson faces criminal charges for his role in the wrongful conviction.


If prosecutors knew they could face consequences for their mistakes, like a fine or the risk of losing their law license, Morton says, they would play fair in the courtroom.

“I just can’t imagine this coming to naught,” he says. “Something’s going to happen. I’m confident of it.

first installment of the Tribune series