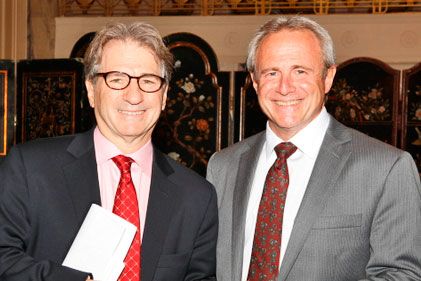 Michael Morton (right) with Innocence Project Co-Director Barry Scheck at the 2012 Celebration of Freedom and Justice in New York.


Three weeks ago, as covered by the Innocence Blog, the Marshall Project broke a story revealing new allegations of prosecutorial misconduct that likely caused Texas to wrongly execute Cameron Todd Willingham. In response to that story, Texas exoneree Michael Morton wrote an op-ed that appeared in today’s

about the prosecutorial misconduct in both Willingham’s and his cases and the need to hold the justice system accountable for its errors. Morton writes:


Three years ago, I sat in a Texas prison cell despite DNA evidence that proved my innocence. The prosecutor who had the power to set me free initially refused to acknowledge that miscarriages of justice occur.

In 1987, the murder case against me consisted solely of junk science, with a heavy dose of prosecutorial misconduct. Thank God it was not a capital case. If I had faced the death penalty, I would have been executed years ago.

Cameron Todd Willingham was not so fortunate. Although efforts were made to stop his execution, Willingham — who I believe was innocent — was executed Feb. 17, 2004.

Willingham, a victim who initially suffered the unspeakable loss of his children, Amber, Karmon and Kameron, ultimately died a victim of what appears to be the most egregious deprivation of federal constitutional rights. He cannot be brought back from the grave, but the prosecutor who violated his federal civil rights can and should be federally prosecuted and held accountable.

I personally lived the nightmare of being wrongfully convicted of murdering my wife, the mother of my son. It is unimaginable to me to consider the horror of being wrongfully convicted and executed for killing one’s own children. A prosecutor who was entrusted to protect civil rights should be held accountable to the fullest extent of the law for causing the deprivation of those rights.

Morton spent nearly 25 years in prison for murdering his wife, Christine, until DNA testing proved his innocence and implicated the real perpetrator. His memoir,

Getting Life: An Innocent Man’s 25-Year Journey from Prison to Peace

, is on bookshelves now.