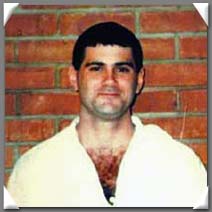 On Monday, the Texas Criminal Defense Lawyers’ Association said that John Bradley, the chairman of the state’s Forensic Science Commission, has abused his power by ignoring the mandate of the legislature and creating subcommittees to work beyond the public’s view.  The association’s president, Stanley Schneider, also said Bradley may be violating the Texas Open Meetings Act.

The commission is reviewing several cases, including the arson investigation of a 1991 house fire that Cameron Todd Willingham (left) was convicted and put to death for in 2004. That allegation, filed by the Innocence Project, raises serious questions about arson analysis in cases statewide.   Bradley was appointed chairman in October when Gov. Rick Perry replaced several members of the commission two days before it was set to review Willingham’s case and hear testimony from a national arson expert.  Willingham’s case was not discussed at commission meetings until last month when Bradley created a subcommittee – which would hold closed meetings.

The Houston Chronicle reports that an appellate court in a San Antonio case found that meetings of a city council subcommittee should have been open to the public.

“Because evidence … indicated that the subcommittee actually made the final decisions and the City Council merely ‘rubber stamped’ them,” the attorney general’s handbook says, the meetings should have been open.

“Here,” Schneider said of the forensic board, “you have the (subcommittee) hearing evidence and deciding what evidence will be presented. So, just because you don’t have a quorum doesn’t mean it’s not doing the full commission’s work.”

Bradley countered that “no binding decisions are made by the committees, only recommendations that must be reviewed, debated and ultimately voted on by the entire Forensic Science Commission in a public forum.”

Several separate expert reviews have found that the forensic analysis used to convict Willingham was incorrect and that experts who testified at his trial should have known it was wrong at the time.  Willingham maintained his innocence until his execution in 2004.