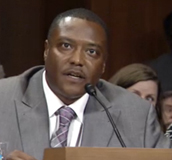 Last June, Texas death row exoneree Anthony Graves was among several wrongfully convicted former prisoners who testified before Congress about the inhumane treatment of they suffered in solitary confinement. Graves spent 12 years on Texas’ death row for a 1992 mass murder, and was released in 2010 after all charges were dismissed.
Today, he continues to speak out against the practice as the Texas Legislature considers two bills that call on the state to find better solutions to solitary confinement. In an op-ed that appeared in Thursday’s Houston Chronicle, Graves recounts his experience and calls on the state to do better.

I didn’t know that guards would feed me like a dog, through a slot in my door. Instead of providing basic nutrients, the food sometimes contained rat feces, broken glass or the sweat of the inmate who cooked it. This diet caused me health problems that continue today.

If you believe in the death penalty, I hope you would at least agree that some of us – the innocent ones and ones unlawfully sentenced to die – did not deserve this torture. Even if you believe in the death penalty, these torturous conditions make no sense. They damaged guys so much they could not repent for their crimes. Guys could not focus on the wrong they had done when they had a legitimate complaint of being tortured in administrative segregation by the state of Texas. And the torture was unnecessary.

I lived through solitary and I know there is a better way. These bills should become law because solitary is simply a tool to break a man’s spirit – it doesn’t make him better or our communities safer.

Read a copy of the

submitted on behalf of six wrongfully convicted individuals at the first-ever Congressional Hearing on Solitary Confinement.