Ten Great Moments of the Decade 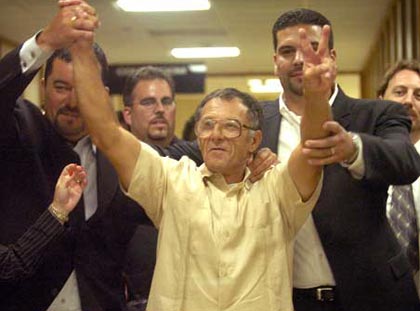 It goes without saying that DNA testing and the issues surrounding wrongful convictions have left their mark on the criminal justice system in the last ten years. When the decade began, DNA testing had been used in American courtrooms for more than 11 years, but exonerations were still fairly rare.

In the last ten years, 182 people have been exonerated through DNA testing and states have passed dozens of laws addressing the causes of wrongful convictions. Yet there is plenty of work to do — countless innocent people remain behind bars as we pass into 2010 and the threat of wrongful convictions in today’s courtrooms is still very real.

As we look forward to freeing more innocent people than ever in the decade ahead and enacting major reforms to prevent wrongful convictions, here is a list (in chronological order) of 10 seminal moments from the 2000s.

(2003) — Pointing clearly to the frightening rate of exonerations in his state (since 1977, 13 death row prisoners had been cleared while 12 had been executed), Gov. George Ryan

granted blanket clemency to all 167 people on death row


Congress passes the Justice for All Act

is the most significant legislation to ever address wrongful convictions in the United States. It provides an avenue for federal prisoners to seek DNA testing and funds incentives for states to offer similar testing and to improve DNA testing capacity. It also provides compensation for federal exonerees.

(2005) — An award-winning documentary chronicling the lives of seven men released from prison after serving years for crimes they didn’t commit, After Innocence brought  the issue of wrongful convictions to America’s movie theaters and living rooms.

tells the heartbreaking story of a murder in Oklahoma and an unimaginable injustice suffered by two innocent men. The book reached best-seller status around the world and a film version is in development. Following the book’s publication, John Grisham joined the Innocence Project’s board of directors. Several other excellent books also chronicled wrongful conviction cases during the decade, check back tomorrow for the decade's must read list.

(2007) — It took 12 years to exonerate the first 100 people through DNA testing. It was just seven years later that

became the 200th person exonerated through DNA. He served 25 years in Illinois prisons before he was cleared.

(2008) — the history of criminal justice in the United States is filled with poignant moments of injustice overturned, from tear-filled homecomings to stirring speeches and courtroom victories. One of the most memorable is the moment Dennis Fritz, who was exonerated after 11 years in prison for an Oklahoma murder he didn’t commit, unexpectedly danced onstage with the mother of the murder victim at a New York event.

(2009) — Faulty forensic evidence played a role in more than half of the wrongful convictions later overturned through DNA testing. Many forensic techniques used in courtrooms today have never been subjected to rigorous scientific evaluation. In 2009, the National Academy of Sciences released a landmark report calling for the U.S. federal government to create a federal entity to oversee and support the forensic disciplines.

Photo: Innocence Project client Luis Diaz was exonerated in Florida in 2005 after 25 years in prison for a series of crimes he didn't commit. Courtesy South Florida Sun Sentinel.