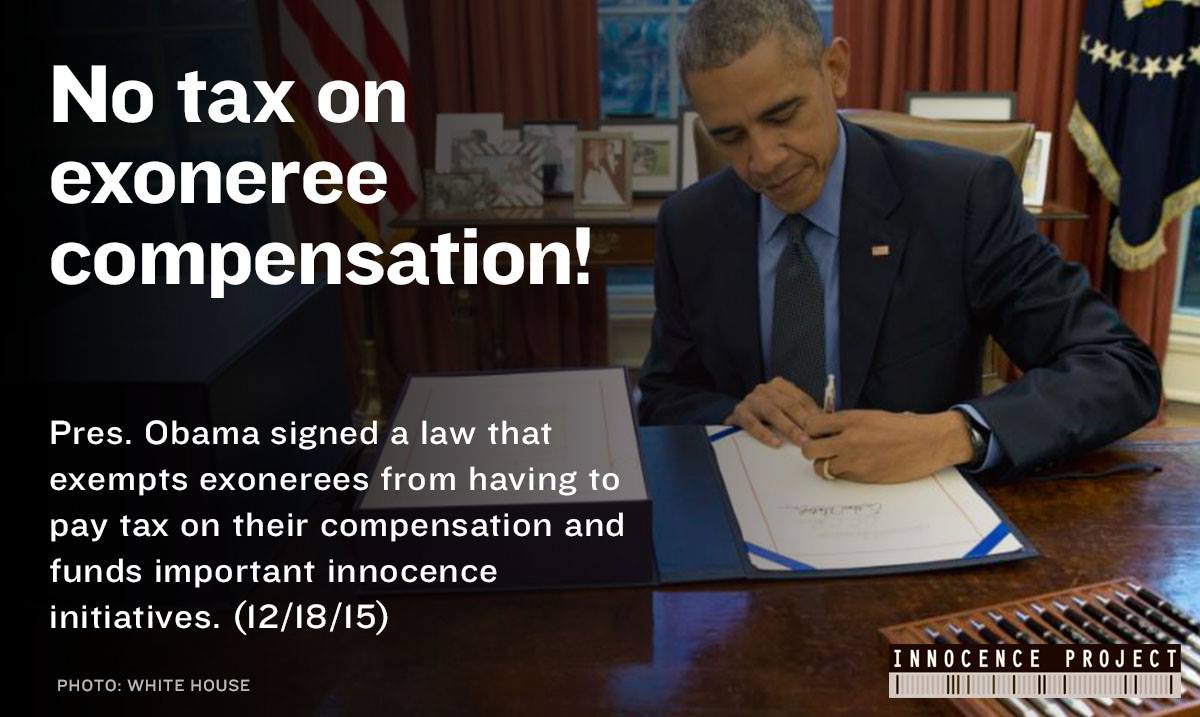 When Lewis “Jim” Fogle was exonerated and released last summer after spending 34 years in a Pennsylvania prison for a crime he didn’t commit, he didn’t expect his punishment to continue even after the state had acknowledged his wrongful conviction. And yet, despite being the fourth longest-serving exoneree in the country, Fogle was denied any form of compensation for the years he unjustly spent behind bars. That’s because Pennsylvania is one of 20 states without a wrongful conviction compensation statute – which means Fogle will ultimately have to fend for himself.

For hundreds of other exonerees across the country, however, compensation is a right accorded to them for their lost time and immeasurable suffering.  However, it has been unclear toexonerees whether this compensation is subject to federal taxation.

Until now, however, it has been unclear to exonerees whether this compensation is subject to federal taxation.

The recent passage of the Wrongful Conviction Tax Relief Act, which President Barack Obama signed into law in December 2015, amends the Internal Revenue Code to allow, according to the

, a wrongfully incarcerated individual an exclusion from federal taxation on civil damages, restitution or other monetary awards received as compensation for wrongful conviction. It’s a step for which the wrongful conviction advocacy group has long lobbied and a move it now openly applauds.

Harry Stein, a tax expert and the director of fiscal policy at the Center for American Progress, similarly admitted to

in the magazine’s latest inquiry into the taxation of the wrongfully convicted that the Tax Relief Act ultimately provides “really meaningful tax relief to people who are in a terrible situation.”

“This law seems quite clear in saying that if you’re compensated for wrongful conviction, that’s not taxable,” said Stein. “It’s just one of those things. When the gears of Congress are able to turn a little bit, things like this can happen, that otherwise just get lost for no reason.”

Prior to the new law, in order to be exempt from taxation, exonerees and their lawyers would be forced through a series of legal hurdles “to prove that the compensation was awarded due to injury or illness suffered while behind bars,” writes

. If, instead, their compensation was deemed taxable, the exonerees could find themselves faced with “extreme difficulties.”

“If an exonerated individual spent a significant portion of their compensation on things like housing, clothing, and food, and then later faced a tax bill and possibly additional fines for nonpayment, what was he or she to do?” asked

, adding that “if an exonerated person sought out professional advice from a lawyer or accountant about his or her compensation, it was often difficult to get a correct answer since the law is so nebulous and interpretations can vary based on the case, compensation, or geography.”

According to the monthly publication, the new law now not only exempts compensation from taxation, but is also retroactive, thereby granting exonerees who had their compensation moneys previously taxed a full refund.  “But,”

reports, “the window to file for reimbursement will only last for a year, requiring those who paid taxes on such compensation awards to re-file by the end of 2016.”

Celebrating the successful passage of the Wrongful Convictions Tax Relief Act through Congress in December, Rebecca Brown, policy director for the Innocence Project, confirmed that the new legislation would now offer additional relief to exonerees who had already been through so much while also voicing hope that it could open the doors to more positive change.

“Wrongfully convicted individuals face profound barriers to reentry while grappling with the lasting physical, emotional and psychological impacts of incarceration,” Brown said. “We must do more to address these reentry needs, and the Wrongful Convictions Tax Relief Act of 2015 is an important step in this process.”