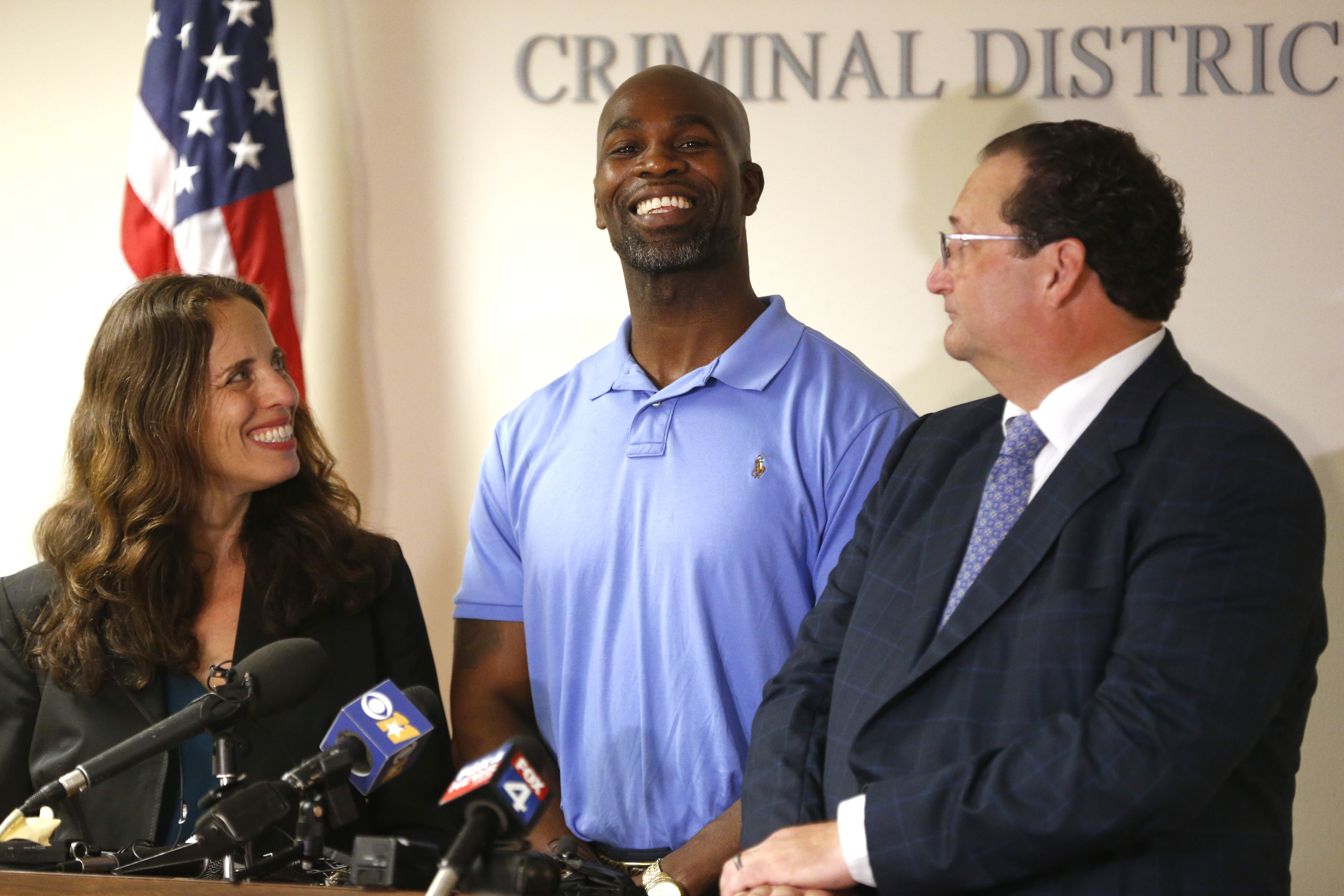 Nolley served 19 years of a life sentence before he was released on bond in 2016 with the consent of D.A. Wilson, who had agreed to reinvestigate his case through her Conviction Integrity Unit (CIU) shortly after taking office. In May 2018, the Texas Court of Criminal Appeals agreed that Nolley’s 1998 conviction should be overturned based newly discovered evidence that critical information regarding two state witnesses had not been provided to Nolley’s lawyers in 1998.   Nolley’s lawyers in 1998. But the original charges remained pending until today’s decision by prosecutors to dismiss the case against Nolley entirely.

“Today marks the end of an incredibly painful journey for John Nolley, who wrongly served 19 years for a murder he didn’t commit,” said Nina Morrison, Senior Staff Attorney with the Innocence Project. “Yet this day would have never come without the extraordinary work and dedication of District Attorney Wilson and her Conviction Integrity Unit, as well as the detectives in the Bedford Police Department, who put hundreds of hours into a joint effort to reinvestigate this case and seek the truth.”

“Today marks the end of an incredibly painful journey for John Nolley, who wrongly served 19 years for a murder he didn’t commit.” Nina Morrison

In July 2015, just months after taking office, District Attorney Wilson agreed to reinvestigate Nolley’s case through her office’s newly formed CIU. The CIU collaborated with the Innocence Project and Fort Worth attorney Reagan Wynn in reinvestigating the 1996 murder of Sharon McLane. Since the investigation began, the District Attorney’s office has spoken to more than 70 witnesses. Together, prosecutors and the Innocence Project also conducted more than 100 forensic tests, including DNA and latent print analyses. The complete results of this testing and investigation are not yet public while law enforcement continues to pursue other suspects in McLane’s killing. But today, the District Attorney announced that her office had reached the conclusion that Nolley’s indictment should be dismissed based on actual innocence.

McLane’s body was found stabbed to death in her home on Saturday, December 14, 1996. Her body was partially clothed, indicating that she had been the victim of an actual or attempted sexual assault. The murder occurred sometime after she finished her shift at the Advantage Rent-A-Car on Wednesday, December 11.

The following day, a married couple who lived in the apartment complex, heard what they described at trial as “blood-curdling screams” of an adult female coming from the direction of McLane’s apartment at slightly after 3 pm. Approximately 15 to 30 minutes later, the husband observed an unfamiliar tall white man wearing a black cowboy hat walking out of the breezeway adjacent to McLane’s apartment. A neighbor and maintenance worker also saw a man fitting that description 15 to 20 feet from McLane’s apartment. Nolley is African American and was working at this time. After McLane didn’t show up for work on Saturday, December 14, a friend was dispatched to her apartment to look for her and her body was found, as well as three bloody knives and piece of paper with a bloody palm print.

Although police were initially convinced that the assailant was likely the male in the cowboy hat who had been observed, Nolley became a suspect after police learned discovered phone records indicating that Nolley had visited the victim in her apartment the night of December 11th.  Nolley was friends with McLane before her death: they had visited one another’s homes on several occasions, and Nolley and his girlfriend had recently hosted McLane and her young daughter for Thanksgiving dinner.  he had visited her home on the evening of December 11th.  While not initially forthcoming about having seen the victim on December 11th, Nolley eventually gave a voluntary statement acknowledging his visit with the victim, explaining that he had initially lied to police because he was afraid to admit that he had sold her marijuana that night.

“I do not have any resentment toward anyone at this point.” John Nolley

Other than two beer bottles (which Nolley had already informed police about) found in the victim’s trash containing a fingerprint matching Nolley, there was no physical evidence linking him to the crime scene at the time he was charged.  Nevertheless, he was convicted of the crime based largely on the uncorroborated testimony of a jailhouse informant. informants.  New evidence uncovered during the reinvestigation revealed that the informant in fact gave perjured testimony at Nolley’s trial.  John O’Brien, who had a long criminal record, claimed that Nolley confessed to him while they were both in the jail law library.  The alleged confession, however, did not match the crime, and the CIU discovered documents revealing that O’Brien had been a state informant in numerous other cases, and lied to the jury when he claimed that he had never “snitched” on anyone but Nolley.

Two other witnesses claimed that Nolley made inculpatory statements regarding the crime. The CIU discovered that both witnesses gave contradictory testimony before the grand jury, with one witness telling the grand jury that Nolley had never indicated he had “cut” or stabbed anyone, despite claiming at trial that he had made such a statement.

“This day would have never come without the extraordinary work and dedication of District Attorney Wilson and her Conviction Integrity Unit, as well as the detectives in the Bedford Police Department, who put hundreds of hours into a joint effort to reinvestigate this case and seek the truth.”

After his conviction, Nolley sought the help of the Innocence Project and Fort Worth attorney Reagan Wynn, who donated his time pro bono to the case. With the support of the D.A.’s office, an expert using new digital technology that wasn’t available at the time of the trial examined a bloody print on the paper found on the victim’s body and concluded that it didn’t come from Nolley.

Nolley’s case is also notable in that even before today’s exoneration, it has already led to significant legal reforms.

In 2017, the year after CDA Wilson recommended that Nolley’s conviction be vacated, the Texas legislature passed the most comprehensive legislation in the country regulating the use of jailhouse informant testimony.  The law requires county and district attorney offices to track information, including benefits provided to jailhouse informants, in exchange for testimony, previous cases in which they provided testimony and benefits provides in those cases, and their complete criminal history. This information must be disclosed to defense attorneys, which allows them to raise issues of credibility in court so that judges and juries can more accurately assess jailhouse informant testimony and ensures that prosecutors have accurate information on jailhouse informants so they can better assess whether to use them as witnesses and make all required disclosures to the defense.  The new statewide law is modeled on an informant tracking and disclosure policy that CDA Wilson and her CIU director developed for Tarrant County prosecutions in the wake of Nolley’s 2016 release from prison.

Incentivized jailhouse testimony has contributed to approximately 15 percent of the nation’s 362 DNA exonerations, and the Texas law stands as a model for other states.

Since Nolley’s 2016 release from prison, he has gotten married (to a childhood friend), and the couple has a 10-month-old baby, John Nolley III. He has worked in local factories and real estate companies, and recently started his own maintenance and janitorial business. Today’s exoneration based on “actual innocence” will finally make Nolley eligible for financial compensation from the State of Texas for the 19 years he served in prison.

Nolley was surrounded by family members and local exonerees when he was exonerated in court today. 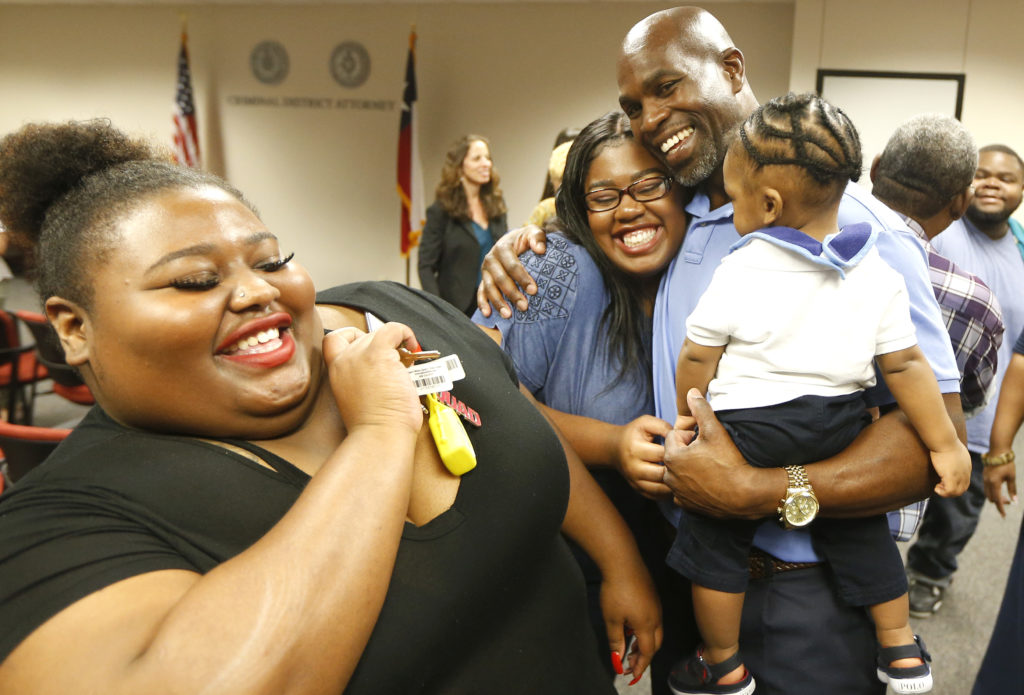