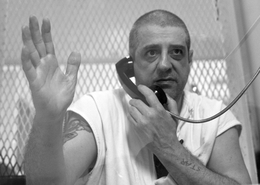 Hank Skinner came within 40 minutes of being executed in March before the U.S. Supreme Court stayed his execution in order to consider his  right to seek DNA testing under federal civil rights law. In the months leading up to the scheduled execution, thousands of Innocence Project supporters helped to raise awareness of Skinner’s case by sending letters to Texas Gov. Rick Perry and advocating publicly for a stay so DNA testing could proceed.

Skinner’s attorneys are challenging lower courts’ denial of DNA testing access on the grounds that federal civil rights law should allow a request for DNA testing that has the potential to prove innocence. The Innocence Project does not represent Skinner but supports DNA testing in any case where it can prove innocence. Among the evidence Skinner is seeking to test are knives from the crime scene, hairs from the victim’s hand and a windbreaker possibly worn by the perpetrator.

“We look forward to the opportunity to persuade the court that if a state official arbitrarily denies a prisoner access to evidence for DNA testing,” Attorney Rob Owen told the Texas Tribune in May, “the prisoner should be allowed to

challenge that decision in a federal civil rights lawsuit.” Texas prosecutors, on the other hand, argue that the evidence Skinner is seeking to test would not be sufficient to establish his innocence, and that he doesn’t have the right to testing because he didn’t ask for tests during his original trial.

“He made this new claim on the eve of his execution,” Ed Dawson, an attorney for the state,

told the Fort Worth Star Telegram

. “His attorneys say that there’s a chance that he’s factually innocent. We don’t think there’s a real possibility of that.”

Read media coverage of the case below:

Supreme Court to Rule on Access to DNA Tests

of the Skinner case