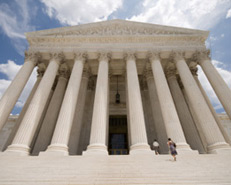 Minutes before Hank Skinner was scheduled to be executed this afternoon, the U.S. Supreme Court issued a stay, possibly allowing him access to the DNA testing he has been seeking for a decade.

DNA evidence from the crime scene in the case could prove Skinner’s innocence or guilt, and thousands of Innocence Project supporters have emailed Texas Gov. Rick Perry in recent days urging him to grant a stay so testing can proceed.

Skinner’s wife, attorneys and others will discuss the case – and these last-minute developments – tonight on CNN’s Larry King Live.