Steven Barnes Freed in NY, Should Be ‘A Wake-Up Call’ 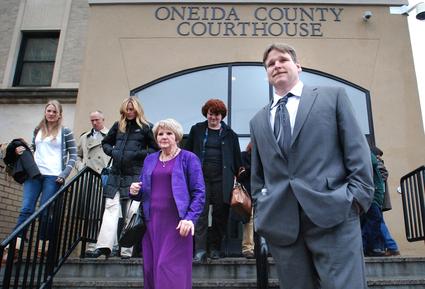 Innocence Project client Steven Barnes was released this morning from a courthouse in upstate New York, after serving nearly 20 years in prison for a 1985 rape and murder he has always said he didn’t commit. New DNA tests on evidence from the crime scene strongly support Barnes’ claim of innocence, and led a state judge to vacate his conviction this morning. (Above photo, Barnes and his mother, Sylvia Bouchard, after he was released today. Photo courtesy Utica Observer-Dispatch)

Barnes’ 1989 conviction rested in part on unvalidated forensic testimony, including soil comparison and analysis of an imprint allegedly left on the outside of Barnes’ truck by the victim’s jeans.

“Unvalidated and exaggerated science convicted Steven Barnes and cost him nearly two decades, but real science finally secured his freedom,” said Barry Scheck, Co-Director of the Innocence Project, which is affiliated with Cardozo School of Law. “This is the latest in a long line of wrongful convictions based on improper or invalid forensic science that were ultimately overturned through DNA testing. Until there are clear national standards about what kind of forensic science can be allowed in court, more people like Steven Barnes will be wrongfully convicted while the actual perpetrators of violent crime remain at large.”


A former New York judge today said the Barnes case should be a wake-up call for the everyone involved in the criminal justice system.

Barnes: ‘I knew this day would come’