He Didn’t Want a Relationship During His 75-Year Sentence, But She Was His ‘Key’

Stefon Morant was wrongfully convicted in 1994 of two murders that took place in New Haven, Connecticut in 1990. He spent 21 years in prison until his release in 2015 with the help of the Connecticut Innocence Project. Morant was offered and accepted Alford plea, which allowed him to maintain his innocence while reducing his 75-year sentence. And while it gave him back his freedom, he can never exonerated.

While in prison, Morant reconnected with a childhood sweetheart, and more than 10 years later, they are still together. Here’s what he had to say about the evolution of their love.

I never in my life thought that I would be married — ever. I had been engaged a lot of times, but it didn’t work out, and I don’t think I would have ever gotten married if it weren’t for Kimberly.

We met in fifth grade in 1979. She was the new girl at our junior high school, and within a day or two, I said to myself: She’s going to be my girlfriend.

And so I looked back at her in class one day and asked her, “Do you want to be my girlfriend?” And she said, “Yes.” And we weren’t really like girlfriend and boyfriend because we were so young — we never kissed or anything like that, but I would walk her home. She only lived a few blocks away, but it seemed like a mile because we had little legs back then. And we would go to Jocelyn Square Park in New Haven and play, and if I ever tried to get fresh she would scratch me.

I never in my life thought that I would be married — ever.

But after sixth grade, I moved to the other side of town, so I went to a different school. We kept in touch over the phone for a while, but we grew apart. We ended up back at the same high school, but by then she had a new boyfriend and I was running around doing what young adolescent boys do.

I moved to South Carolina for a bit after high school and then came back to Connecticut and saw her around a few times, but then we lost touch because I was thrown in prison — the “cage,” I never say “prison,” I call it the “cage” — in 1994.

In 2007, Kimberly came back into my life. She had lost her husband to a heart condition and was going through some things and, of course, I was going through some things, and she reached out to me. She actually wrote me a letter, which took months to get to me. In the letter, she asked if she could come visit me. I said yes, and she filled out a visitor form and it took another four months, which felt like forever. But once she was on the list, she came the very next Friday and never looked back. 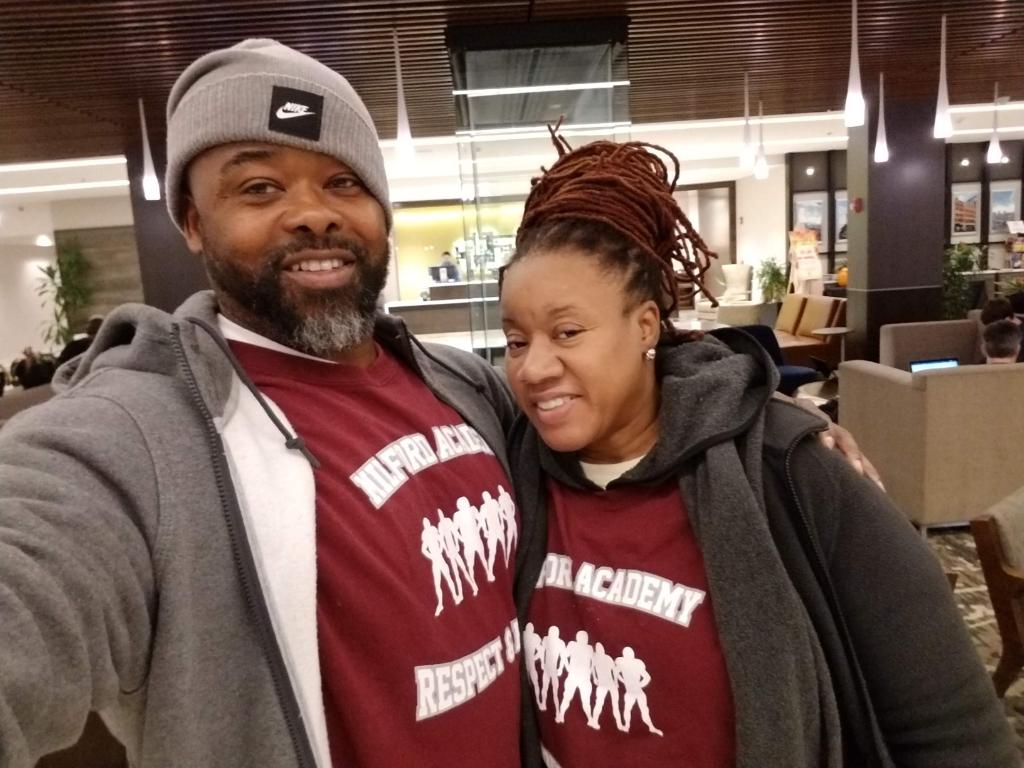 Stefon and Kimberly Morant. [Courtesy of the Stefon Morant]

After that, she came every Friday or every weekend. Sometimes she would come three times a week, which was the maximum number of visits allowed.

At first we were just friends. I never wanted companionship during that time. I had a 75-year sentence, so I didn’t want a romantic relationship because I didn’t want to bring anybody through what I was going through. But something about her stimulated my spirit and drew my soul towards her and made me feel like: She’s the one for me.

She told me, “I’m going to fight this with you. This is my mission, this is the journey that God put me on because I believe that you are an innocent person.”

And because she believed in me a door felt like it opened, like she was my key.

We got married about 13 months later. I came home six years after that, in 2015, and the next year we had a big formal wedding with over 200 guests — a really beautiful, elegant wedding.

Of course, we have our ups and downs — sometimes it’s rough and sometimes it’s all smiles, but she always wants me to be the best Stefon that I can be. So sometimes, she can be stern, but sometimes I need that. And in a way she’s overprotective of me, but it’s because she’s a true friend and never wants to see anyone go through a situation like I did, of being wrongfully convicted, ever again.

At the end of the day, she’s a real “ride or die” — if she’s there for you, she’s truly there for you. And I know she loves me 110%. And that’s what I love about her most: her sincerity. And her smile.

She always wants me to be the best Stefon that I can be.

We love to travel, and every vacation is special because we are together, and because I have my freedom. Sometimes when I’m driving, a tear comes to my eye just because I’m able to do this. There was about a nine-year period in my life where I barely even saw a car or a motorcycle. All I had to look at was a wall. Now, I have the freedom to go about doing what I want and nobody can stop me.

It’s sad to say, but prison took the joy out of all holidays for me, so I don’t really celebrate holidays. But Valentine’s Day is Kimberly’s favorite holiday, and I always make sure I get her something because she loves it. This year, I’m planning to go bigger than usual. I think I’ll make some lobster tails and sauté some asparagus with butter and make a nice elegant meal, with candles and soft music and everything.

I think Kimberly probably didn’t expect me to be the man that I was when she first came to see me. She was probably expecting that fly, slick guy from before, but she met a different person — a changed man. And us meeting again not only transitioned the way I lived my life, but it did for her too.